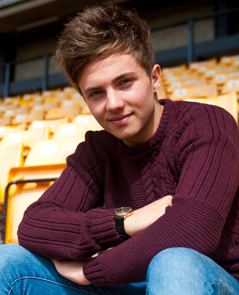 Ollie Marland is aiming to make the move from striker to pop superstar. The 18-year-old forward who left Port Vale over the summer is in the unusual situation of having appeared in front of more people as a solo act than the Valiant’s first XI can expect for a league match.

He first hit the headlines last summer appearing in front of 15,000 people at Stoke 2012 Live, on the same bill as Labrinth, Rizzle Kicks, The Saturdays and The Loveable Rogues.

That’s meant that over the last 12 months Ollie has attracted more media attention for his singing than his striking prowess – even though he continued to bang in the goals for the Valiant’s youth and reserve teams.

In the process he has gained thousands of fans, is being asked to perform more and more gigs and was even been approached to do X-Factor. A far cry from his first performance just 3 years ago when he admits he wasn’t even sure how good he was.

“I’d never really sung other than at home to myself but in the last year at school a pal of mine asked me to do a gig with him,” Ollie told LFE.

“I was a bit unsure but I gave it a go and loved it. After I’d done that I put videos on YouTube and did a few gigs to raise money for Vale’s youth department. All the lads came along and thought it was cool which was great.”

“It all snowballed after I’d won the Signal 1 competition and sang in front of all those people at the Stoke 2012 weekend. I asked people to follow me on Twitter and check me out and most people did and it went from there.”

Far from getting stage fright Ollie took the days in his stride even if he did get butterflies from meeting some of the other headline acts.

“At first it was like, I’m standing next to Labrinth and other ridiculous people but I got chatting to him and The Loveable Rogues and we’ve kept in touch since.”

While Ollie’s first love is football, Vale opted to release him in the summer which while disappointing removed an equally tough decision from his mind.

“The Gaffer told me it was a close one (decision) but the fact that they have released me has helped me out because if they’d offered me a contract I wouldn’t have known what to do. I’ve wanted to be a footballer since I could kick a ball but I was glad it was taken out of my hands in some respects.”

With a Twitter following of close to 70,000, his own recently launched website and management companies clambering for his signature Ollie’s exit route from football appears laid out before him and he knows what he wants to do next.

“I do want music as my career but if it fails I’d love to come back to football and give it another crack,” continued Ollie.

“In terms of the music though the interest I’m getting is brilliant. It’s mad everywhere I go I get noticed even outside of Stoke. I’ve been to Liverpool, Manchester, Birmingham, London and people come over and say hello or ask for pictures but it’s what you need as a young performer and singer – it’s the thing that gets you album and single sales so it’s pretty cool.”