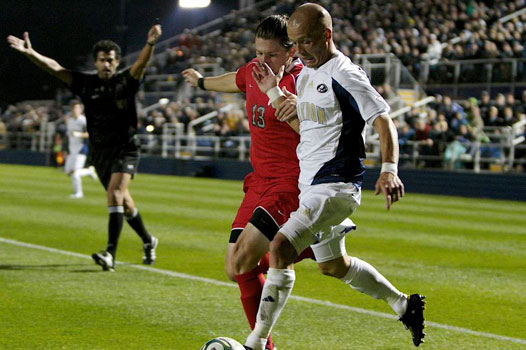 Luke Holmes graduated from the ASE programme at Bury in 2008 but despite his prolific form as a goal getter and provider he was not rewarded with a professional contract.

The Oldham-born forward put his disappointment aside and played in LFE’s Assessment Trials in 2008 at Valley Parade. His tireless front running was rounded off with a goal and his overall display was enough to attract the attentions of the Notre Dame College coaching team who were keen observers from the stand.

They offered Holmes a four year scholarship and he was quick to accept when he realised he would be joined in Ohio by Oldham Athletic duo Daniel Knight and Jack Fitzgerald, both players that he was previously acquainted with.

The Falcons have since recruited a number of youngsters via LFE and are reaping the rewards on the pitch. Last season saw them break college records in with 23 wins and one draw coming from twenty-four fixtures.

While Notre Dame enjoyed unprecedented success in their history, Holmes too hit the headlines being awarded the individual accolade of being the 2010 Men’s National Player of the Year.

Notre Dame Head Coach, Michael McBride was quick to pay tribute to his starlet, “Luke’s National Player of the Year award is well deserved. He had a magnificent season, culminating in an exceptional performance at the national tournament.”

“Luke is a talented player and a team player,” said McBride. Holmes also received the award of 2010 Men’s Soccer Scholar-Athlete.

Luke is the consummate student-athlete; he excels both in the classroom and on the pitch,” added McBride.

A scoring sensation with 70 goals in 66 games in the States, Holmes name had been linked to the 2010 MLS draft with a couple of franchises reportedly keen on the hit-man, however he is keen to first finish off his primary goal, a major in Communications!

“I want to concentrate on completing my major in Communications before looking to turn to professional. I have just one year left till I graduate so if I have another good season playing well and scoring goals I’d hope to be listed in the 2011 MLS Draft.”

When asked what advice he could offer to players looking to go out to the USA on a scholarship he said, “I think if you can manage your priorities in terms of studying, playing and experiencing you will never look back.”

Holmes will complete his final year at the University of Akron following his transfer to the National Champions in January 2011.