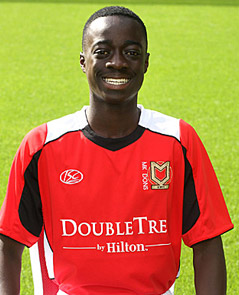 Joel Gyasi had a progressive first year as an Apprentice regularly featuring for both the U18 and reserve teams.

In his first season at the club he built a reputation as a reliable central midfielder and first-team boss Karl Robinson took note.

A place on the substitute’s bench during MK Dons’ 2-1 League Cup defeat at Burnley early in Gyasi’s second year suggested that he was on track for a professional deal but that never materialised.

The clubs overabundance of central midfielders and the retirement of the well respected Assistant Manager John Gorman proving barriers to his progress at Stadium MK.

“The gaffer said he had too many midfielders,” Gyasi told LFE. “So instead he watched me play right-back towards the end of the season because he knew that I had the versatility to play there as well.”

Gyasi who was named the ‘Apprentice of the Year’ at the Club’s own Awards dinner was subsequently offered the third year of his scholarship by Robinson. However the youngster felt that his performances deserved much more.

And so the released midfielder registered to play in LFE’s Assessment Trials where a strong performance saw five scouts submit their interest but when offered a trial at Stoke City, the midfielder headed to the Potteries in a bid to earn a contract there.
Three weeks and three matches later, more bad news followed, as manager Tony Pulis was unable to offer the 18-year-old a deal.

It was suggested that I signed for Kettering Town to play men’s football week in week out. Stoke said they would keep an eye on me too and so I took that advice and I’ve adapted to non-league without any problems.”