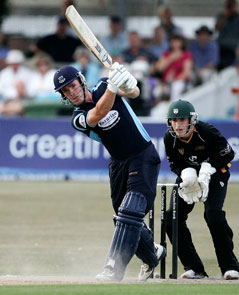 Joe Gatting has stepped up to the crease after leaving football to pursue a career as a professional cricketer.

Gatting had originally joined Brighton & Hove Albion as a 16 year old Apprentice after taking advice from his father Steve, himself a former professional at Arsenal, Brighton and Charlton Athletic.

“Dad said that if I tried football and failed to make it, I could go back to cricket but would have learnt some important life skills,” he said.

Signing for Brighton in 2004, (the Club his dad had appeared for in the 1983 FA Cup Final) a successful Apprenticeship included a first-team debut at Southampton in January 2006 and 11 other first-team appearances.

His reward, a 3-year professional contract and 27 senior appearances the following season augured well for the future.

However, this was to be the high point of Gatting’s Brighton career and after Manager, Dean Wilkins was replaced by Micky Adams, he found himself out of the first-team picture. Shipped out on loan to Woking and seemingly dispensable, the young forward’s career appeared to be on a downward spiral until he was struck by a moment of realisation one morning before training.

“I woke up and realised I wasn’t looking forward to it. I’d lost my enthusiasm and because of the circumstance I was in I just didn’t enjoy playing football anymore.”

My only options were to move Clubs or give cricket a go,” said Gatting.

The Withdean and County Ground’s might only be separated by a mile and a half but for Gatting the cloud that he had been under at Brighton was lifted when he joined Sussex for winter training before signing as a non contract player for the summer of 2009.

At the start of that summer, a pre-season trip to Abu Dhabi ultimately gave him the platform to push for a professional deal. A cameo innings in match one was followed by a hundred in the second game against Surrey after he was asked to open due to an injury to Chris Nash.

Joe was obviously in our Academy so we knew him quite well and were curious to see how quickly he could catch-up,” said Robinson.

“We gave him access to the coaches, the physio and the second team and then when he was given the chance to open in the first XI on tour he took it in a very forceful way and made a hundred. We then gave him a two-year contract as soon as we got back.”

While J.S. Gatting’s progress will no doubt draw comparisons with his Uncle Mike, the youngster is unfazed by any weight of expectation.

“I’m proud to have a Dad and an Uncle that have both been a success in sport. It doesn’t add any pressure to me it’s something I enjoy and people at least know who I am,” he added.

Robinson too believes that Gatting will not be affected by the family name although he has identified one area where the youngster does have an edge on his Uncle.

He hits the ball in the same way as his Uncle and has a good pair of hands like him. But he is also fitter. Mike wasn’t much of a trainer,” he added.