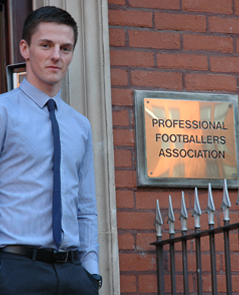 George Bowyer made his debut as a substitute for Rochdale as a first-year Apprentice in the final game of the 2007-08 season.

Unfortunately injury robbed him of the chance of adding to that tally in the play-off semi finals and Wembley final against Stockport.

Rochdale lost out in that game, and while he didn‟t know it at the time, so did Bowyer. His chance had gone.

Despite being in and around Dale‟s first-team squad the following year he was destined to never play another minute of League football.

With Manager Keith Hill eager to build a promotion winning side the time for blooding untried youngsters had passed and Bowyer got the bullet at the end of the 2008-09 season.

Hill led Rochdale out of English football‟s bottom tier for the first time in 36 years the following season. Meanwhile two years after his departure from Spotland, Bowyer, who is working as an Administrator and playing semi professional football at Bamber Bridge could be forgiven for thinking about what might have been.

“On leaving Rochdale there was a massive void but you just have to move on and do it quickly,” said Bowyer.

“In my case that was working for Stockport‟s Football in the Community programme while playing local non-league football.”

“You feel you have to carry on playing after putting in all those years of trying to become a professional.”

“Non-League football is a totally different scenario though to what you‟re used to. In the first instance you notice that standards are below what you‟ve aspired to before. There‟s a more laid back approach to things and you train once or twice a week in the evenings after work. There‟s an adjustment you have to make if you want to do well.”

In three seasons as a non-league player Bowyer has done well albeit at three different clubs. At his first, Ramsbottom Utd he earned the fans player of the season award before moving back down the M66 to Woodley. His impressive form for the Steelmen soon attracted the interest of Bamber Bridge and he moved on to the QED stadium to become one of three contracted players at Brig.

Away from the pitch Bowyer has made huge strides professionally after securing a full-time position working for The PFA. Initially brought in as temporary maternity cover to work on the organisations Kitbag contract he recently discovered that his role was to become permanent and is understandably delighted.

“The main area of my work has been dealing with Kitbag and Nike orders, sourcing kits, boots, medals and trophies for players and clubs. It was obviously different to what I was used to but I soon picked things up.”

“I‟d been here 8 months when I was told that I was going to be offered a full-time post and I was ecstatic because it‟s a great place to work.

“The people here are fantastic and I‟ve already been asked to think about how I would like to develop professionally. Whether that‟s doing a degree or other training I‟m not really sure yet but I know I will be looked after and encouraged.”