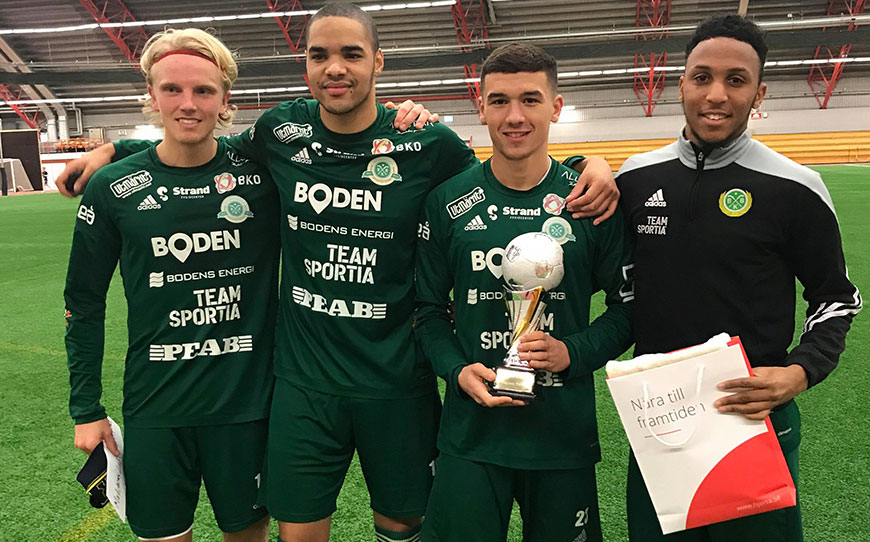 LFE’s Player Placement programme continues to provide past apprentices with the opportunity to carve their way back into full-time football during a three-month stay in Sweden.

Since 2015, over 40 per cent of players have been offered professional deals at the end of their initial placement period. Now, twelve more are currently experiencing the Scandinavian culture while striving to continue their playing career.

Former Stevenage apprentice Zak Guerfi has been with Division 2 outfit Bodens BK since February. Here, the 19-year-old discusses his time abroad so far.

Since being released by Stevenage, I’ve been at a few non-league clubs, but it was a complete culture shock for me and very different to what I was used to. I’ve done a bit of coaching here and there to pick up a bit of money on the side as well, but my goal was always to get back into football full-time.

I stayed in touch with my Regional Officer, Gavin Willacy, after I got released and I spoke to him about how I was struggling with non-league and I didn’t really know what to do next, so he mentioned to me that the Sweden player placement was coming up.

I’m staying in a really small town called Boden – it’s about two hours away from Finland. When I arrived, I got picked up from the airport and taken to my apartment and then the Sporting Director took us out to dinner that night and showed us around. It’s been really straightforward. I get picked up for training every day, I’ve got a gym membership that’s only a 15-minute walk away from the apartment and the town centre’s about the same distance away, so it’s ideal.

The thing I struggled with at the start was cooking because I’m used to my mum cooking for me back home. The first day I was here, I tried to prepare a chicken breast and completely undercooked it and had to throw the whole thing away! Now I’m making three meals a day, so that’s something I’ve definitely picked up from being out here. It helped as well that I’m in an apartment with Jack Serrant-Green, who came out here through LFE four years ago, so he knows exactly what this process is like and he’s helped me a lot, so it’s been quite easy to adapt.

I have to admit, I questioned the standard on my way out here because it’s the fourth tier in Sweden, but I was on the bench for the first game after I’d got out here and I remember thinking ‘I’m going to be sitting on the bench for three months!’ They’re really good players here. The culture of football is much more suited to the way I like to play – they pass it, they work hard and the main thing that stood out for me is that everyone is so humble and kind. In England, I’m used to hearing managers scream from the sideline, but it’s not like that at all here. Everyone’s really calm. The standard of football is really good, the standard of training is great and I feel I’ve already become a better player.

Every eight weeks, the club put on a coaching session for the local kids at schools in the community. A couple of us went to a Bodens soccer camp a few weeks back, we did a shooting drill with them and stuff like that and then handed out some prizes and gifts at the end, so it was a great experience and the kids really enjoyed it.

I’ve picked up quite a lot of the language too. When I came out here I didn’t have a clue what anyone was saying, but now I feel like I can have a conversation and make sense of what they’re saying.

I remember speaking to a few boys that got released from Stevenage a few years back and came on this trip via LFE and they said if you don’t get a pro contract, make sure you take up the opportunity in Sweden. Now I’m in their position and I would absolutely advise anyone who gets released to come out here and do it because the worst thing that can happen is you play full-time football for three months and then have to go back to England, which then gives you a better chance of finding somewhere back home because you’ve developed your game in Sweden. Then the best case scenario is that you stay out here and get a full-time contract at the end of it, so it’s definitely worth it. It’s obviously more than just a football experience as well, so you’re not just improving your game, you’re also developing a lot of life skills that will help moving forward, whether that’s in football or not.

If I’m honest, I felt like I’d come to a dead-end with football in England, so coming here has completely rejuvenated me. I’m quite positive that I’ll be staying until the end of the season, so it really has helped me massively and put me back on track and it’s exciting to see where this could take me now.