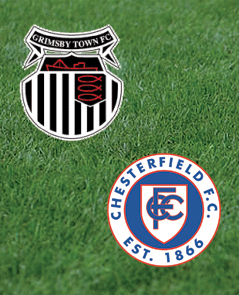 Grimsby Town dealt Chesterfield’s hopes of retaining their Youth Alliance East Conference title a severe blow on Saturday with the Mariners taking all three points in a tight match.

Ironically it was the visitors who started the better of the two sides with Craig Clay and Chris Tingay featuring prominently in the opening stages. And it was no surprise when the visitors opened the scoring. Tingay’s superb cross-field pass picking out Jimmy Adcock and the winger volleying home with aplomb.

With the goal seemingly rousing the Mariners, the game started to flow from end to end and moments before the break, the Mariners levelled. A quick counter move by the home side saw a long ball beat the visitors defence and Kieran Smith ran through to calmly equalise from a tight angle.

Within minutes of the re-start the home-side were ahead. Smith converting from close range past Webb after some sloppy defending by the visitors.

With Tingay leaving the field injured the Spireites looked to Adcock for inspiration and the lively winger almost brought his side level but saw his rasping drive cannon back off the post.

Now in the ascendency, the visitors forced an 80th minute equaliser through Tendayi Darikwa who headed home from a Sam Smith free-kick.

The Mariners were far from finished however, and they showed their resilience when Dayle Southwell converted from close range to give them their seventh consecutive victory, a win which leaves them fourth in the table two pints behind third placed Chesterfield.