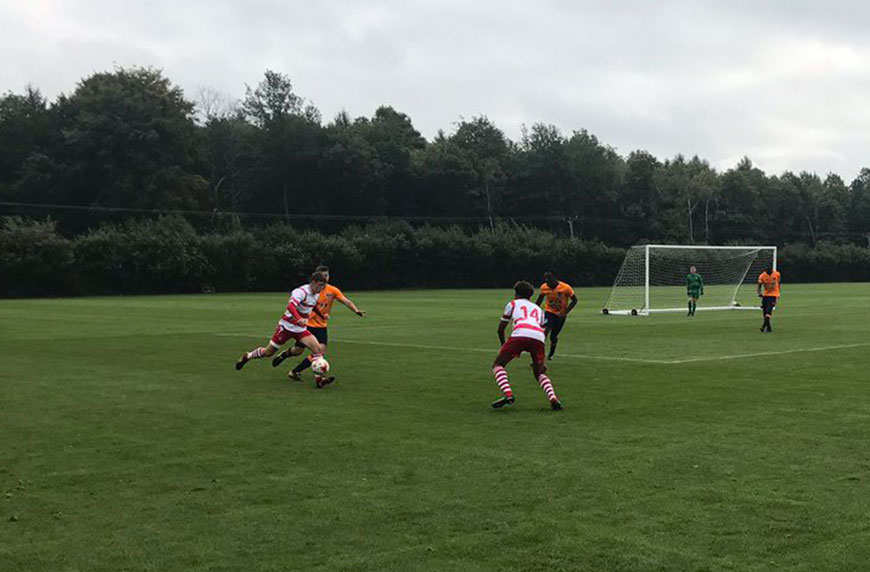 By Joe Harris: A depleted Oldham Athletic Under-18s team produced an impressive 2-0 victory against winless Doncaster Rovers thanks to Chinedu Uche’s opener and an own goal from Brandon Horton.

The result ensured the Latics extended their streak of wins to four which has seen them rise to second in the EFL Youth Alliance North East table, behind Lincoln City on goal difference, while Doncaster are rooted to the bottom with just two points from a possible 15.

Oldham entered the fixture without five regular members of the squad, but showed no ill-effects as they began confidently, causing unrest in the home side’s defence from a handful of early corners.

The early pressure paid off for the visitors on 19 minutes when Latics winger Francois Antoine neatly worked the ball infield from right to Uche, who slotted his right-footed finish with aplomb from the edge of the penalty area.

They almost doubled their advantage courtesy of a header from Festus Arthur as the away outfit continued to threaten with crosses into the area from set-pieces, but he was denied by a superb goal line clearance.

However, the second goal did come six minutes before the break as Max Norman’s cutback found Uche, whose shot at the second attempt was inadvertently diverted into the net by Rovers defender Horton.

The hosts returned for the second half with more attacking intent, with Rilwan Olaosun hitting a long-distance effort that drifted wide of the post, while striker James Morris wasted a glorious opportunity with just keeper Joe Boyling to beat.

Morris then came inches away from connecting with a driven ball across the face of goal as Oldham held on for their third clean sheet of the season, to the delight of Academy Manager Tony Philliskirk.

He told LFE: “I thought it was a very even game between two good sides. In the first half we were in the ascendency and looked very solid at the back and took advantage of the key moments in the game.

“One thing we have this year is pace and we used that very well today. We’ve often struggled this season with getting into good positions but not being able to find that final product, but today we did that well with both goals, so I’m pleased with the win in that sense.”

Meanwhile, Rovers Under-18s coach Paul Stancliffe was able to take some positives from the game despite their wait for a win extending to nine games in all competitions since April.

“I thought we deserved more, we went 1-0 down and after that committed suicide a little bit and lost our way, which has happened far too often this season,” he said.

“We have to learn from our mistakes and learn to pick ourselves back up. We’re aware of the run we’re on but we have to focus on development just as much as results.”