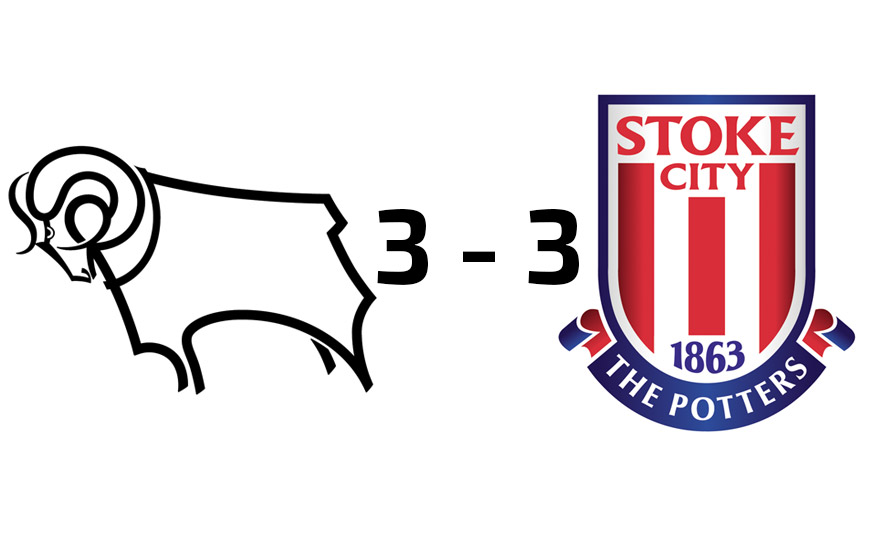 By Jack Furness: A last gasp equaliser from hat-trick hero Julien N’Goy denied Derby County a victory over Stoke in a compelling clash at Moor Farm.

N’Goy’s third, deep into injury time in the second half, ended the home team’s hopes of recording back-to-back wins in the Barclays Under-18 Premier League Group 3.

The Rams included three Under-16s in their squad, with Jaydan Bogle and Jordan Mills appearing in defence and Cameron Cresswell coming off the bench in the second period to play on the wing.

After a fairly even opening the deadlock was broken on 20 minutes. Rams’ midfielder Kellan Gordon’s sent a looping cross into the penalty area and forward Emil Jakobsen headed past Harry Isted in the Potters’ goal.

Stoke recovered almost immediately. Two minutes after conceding, N’Goy was sent through on goal after a slick counter attack and he calmly slotted it past the Derby keeper Josh Barnes to level the scores.

Derby though were not to be deterred and they regained control. Alex Babos, who last week signed his first professional contract with the club, rounded off a neat passing move by moving the ball onto Gordon in the area who curled a shot into the bottom corner of the net.

In the second half, the weather took a turn for the worse as N’Goy again showed his prowess in front of goal.

“He’s a good player,” said Stoke Under-18 coach Keven Russell lauding the forward’s contribution. “I think he’s on about 15 goals now in 15 games which is outstanding really, he’s done really well, his finishing is excellent.”

A 2-2 draw would have been about right but Derby appeared to have struck a winner a minute before full –time. Substitute James Carvell gathered possession and ignored an easy pass to drive forward and curl a shot beyond Isted. However N’Goy spoiled the home team’s day at the death.

Derby County coach Justin Walker admitted he was disappointed by the concession of a late goal but felt there were plenty of positive aspects to his team’s play.

“You think you’re over the line when James [Carvell] scores in the 89th minute but it wasn’t to be,” he said. “I think it is credit to the back four really because we had four full-backs playing at the back today and two of them were Under-16s so they’ve been exposed to a good experience today and I think they’ll gain a lot from it.”