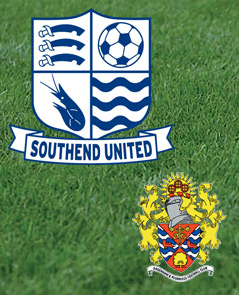 Southend United’s U18’s chalked up their 18th win in 25 matches on Saturday with and 3-2 victory away at Dagenham & Redbridge.

The 2008-09 South-East Conference champions now find themselves at the top of the table after a fourth straight success.

Similarly to their last away fixture at Aldershot Town, Ricky Duncan’s young charges conceded the first of the game early on when a Dagenham centre-forward found the back of the net with a brilliant goal.

Less than sixty seconds later, the hosts could have added to their advantage as Alfie Wren smashed a dipping shot goalwards for the Shrimpers keeper Daniel Bentley to fingertip the ball over the crossbar.

Southend drew level in the 19th minute with an opportunist finish from Crawford. Daggers goalkeeper Danny Sambridge couldn’t hold Kyle Asante’s 30-yard drive and Harrison Crawford was on hand to smash the rebound into the roof of the net.

Shortly after the half hour mark, the Blues went ahead with a well worked goal. Kane Ferdinand and John Owinja combined to release Merrick James-Lewis who moved the ball on for hit-man Kyle Asante to fire home from a tight angle.

The Shrimpers then increased their advantage three minutes after the interval when Asante’s cross was deflected beyond the Daggers keeper by one of his own defenders.

With a two goal cushion the visitors took their foot off the pedal and were punished for their relaxed attitude when the home side pulled a goal back in stoppage time.

Southend Utd now find themselves top of the pile in the Youth Alliance South East Conference as they enter the Christmas break.