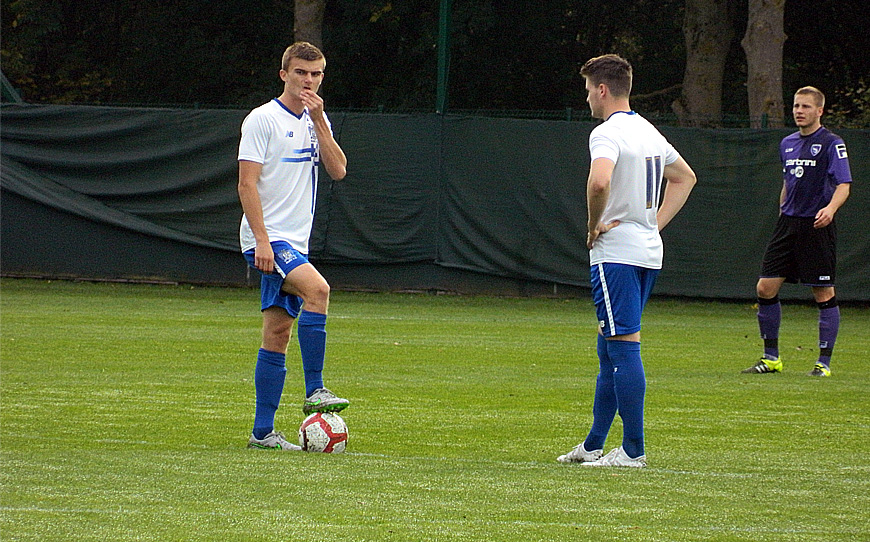 Bury Under-18s continued their fine run of form with a convincing 6-0 victory over Morecambe on Saturday at the Carrington Training Centre.

In a one-sided affair the reigning North West Youth Alliance champions were at their clinical best against bottom club Morecambe. Goals from Robert Bourne, George Miller, Liam Williams, Nathan Turner and Dion Johnston, plus an own goal by Shrimps defender Alex Webb ensured a third successive win for the Shakers.

“There were some wonderful bits of football out there today,” Bury Under-18 boss Ryan Kidd, told LFE. “We dominated the game for 90 minutes really and had a lot of the ball.

“In the last couple of games I’ve wanted us to defend our box a lot better and attack opponents from set-pieces. We managed to get a goal and looked dangerous from set pieces while at the other end our keeper has not really had a shot to save. It’s a good performance.”

Bury dominated from kick-off and could have broken the deadlock within five minutes when Khalid Mohammed’s clever flick found Miller, but his fierce effort blazed over the bar.

Having repelled the hosts for 20 minutes, Morecambe’s resolve was broken when Raquarn Crosdale latched onto a long cross field ball by Williams and played a dangerous ball into the six-yard box, which was bundled in by the unfortunate Webb.

Crosdale initiated the Shakers next attack but Miller saw his route to goal blocked by the keeper. Bury were not to be denied though and when Williams burst through the centre of the pitch and rolled the ball across to his captain, Bourne, the midfielder drilled a right-foot shot into the bottom left corner from the edge of the area.

It took less than a minute to add a third goal to the scoreboard. Miller collected the ball from Morecambe’s kick-off and struck a shot with his weaker left foot from distance that flew into the bottom corner for his 6th goal of the current campaign.

After the break it was more of the same with the home team in commanding form. An unmarked Williams rose to head Bourne’s corner in to the net on the hour mark and Bury increased their lead when Ciaran Best’s marauding run from left-back ended with Turner blasting a 65th minute fifth goal.

With 15 minutes remaining, substitutes Rob Harker and Johnston combined as the former laid off the ball to Johnston who curled a dipping shot from the right side of the penalty area beyond the grasp of the keeper to seal a 6-0 victory.

“The goal scorers will get the headlines but I thought Liam Williams today at the back was outstanding,” Kidd continued.

“I thought he looked a real prospect; he was very comfortable on the ball, defended well, got himself a goal and his passing range was awesome today. There were a lot of good performances but I thought he was the stand-out.”