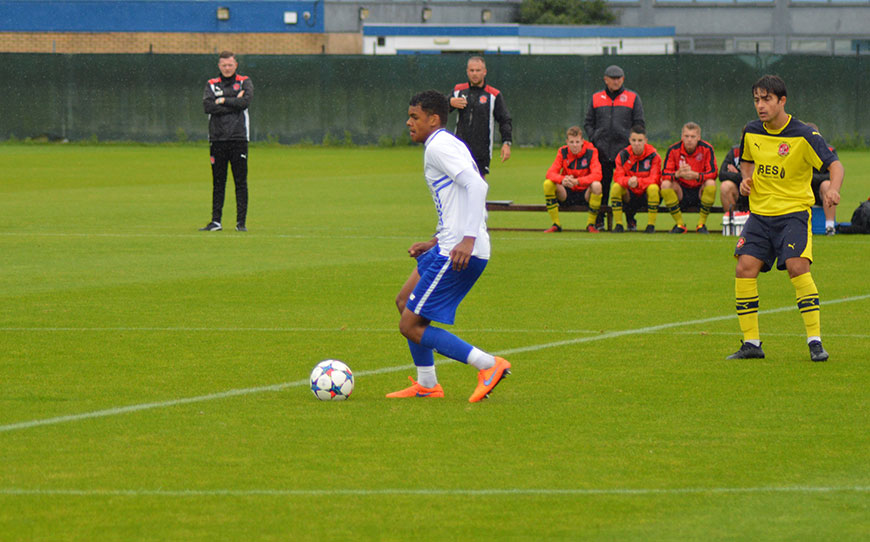 By Owen Keighley: Bury Under-18’s maintained their 100% start to their league campaign with a 2-1 victory over Fleetwood Town at Carrington.

Rob Harker, who has already appeared in David Flitcroft’s first team squad scored both goals to ensure the Shakers prevailed in a hard fought encounter.

Fleetwood almost took an early lead after 15 minutes when Alex Dodd found Dan Mooney on the edge of the box.
His first touch got him away from his defender but he saw his shot whistle past the post.

The home side roared back and Harker found space of the edge of the box but was unlucky when his curling shot hit the top of the bar.

The visitors were then denied by an outstanding double save from goalkeeper Cameron McCulloch who denied Mooney and Garner. Harker then went close again when he saw his header from 12 yards brilliantly tipped around the post by Billy Crellin.

From the resulting corner, Jesse Arizie came within whiskers of giving Bury the lead but he couldn’t quite connect with the cross.

Shortly after the half-time interval though, Bury were awarded a penalty and opened the scoring. Jacob Bedean was adjudged to have been fouled in the area, and Rob Harker dispatched the penalty into the left hand corner.

Harker then made it 2-0 after 64 minutes with a brilliant individual effort. He won the ball on his own, beat two defenders and smashed his shot past Crellin.

Fleetwood got back into the game two minutes later when substitute Connor Finlayson intercepted Bury keeper McCulloch – and he found Mooney – who slotted the ball into an empty net from the edge of the box.

The away side were reduced to 10-men with 12 minutes left when Lewis Shorrock was shown a second yellow card after an off the ball incident with Rob Harker, who was also booked.

In stoppage time, Harker thought he had his hat-trick, but it was ruled out after Fleetwood left-back Solomon Abubakar was fouled in the build-up.

Post match Shakers U18 coach Ryan Kidd insisted that his players have plenty more to offer:

“Were still trying to learn every week, were still managing to win games, which is good because I know there’s another 20-30% in there at the moment,” he said.

“I’m happy that we’ve won, but performance wise I’m not too happy with.

“There was a couple of good individual performances from lads that are building, I thought Nyupambe played well, I thought Charlie Mulgrew did well in the middle of the park and Ciaran Best did well at left-back. Rob Harker’s scored another two, which is good for his profile.”

“He’s a big lad at the moment, still growing and developing. The good thing about him is that he’s guaranteeing us two goals every week at the moment, which is pleasing.

“There’s a lot of work that needs to be done with him, but he’s confident, he’s scoring goals and long may it continue.”

Despite emerging as brave losers, Fleetwood boss Nathan Rooney was happy with his team’s performance:

“I think the lads are growing in confidence week in week out now. With Bury’s level of performance and the players they have, I thought it was a good test for us today,” he said.

“Myself and the lads are happy with the performance, and Ryan (Kidd) and Mark (Litherland) said were the best team they’ve faced this year.

“Five months ago, our boys would’ve crumbled and that game would’ve been 6-1, but the positive for me is that even though we went down to ten-men, we created a lot more chances in the final third than in previous weeks.

“Last Saturday, we were unbelievable against Oldham, but everything we showed today was on another level too. Every counter we had, we looked like scoring, but it wasn’t to be for us.”