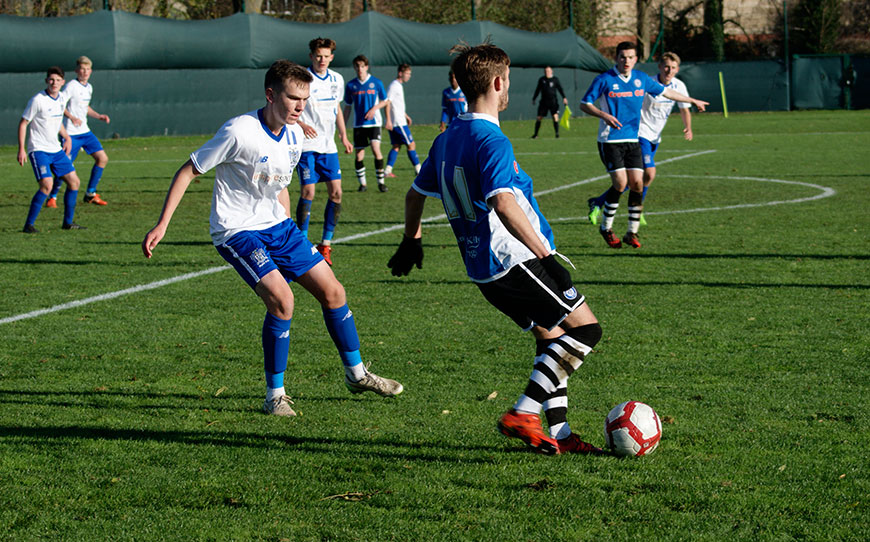 Bury Under-18s were unable to extend their six-game winning streak in the North West Youth Alliance as they were held to a 1-1 stalemate by ten-man Rochdale at the Carrington Training Centre.

Raquarn Crosdale’s early opener was cancelled out by Brandon Smalley as the hosts were forced to settle for a point despite Japhet Mata’s dismissal with half an hour still to play.

“I thought it was really scrappy to be honest,” Bury Under-18s boss Ryan Kidd said. “We weren’t at our best but it’s a decent point.

“We started very well, countered their formation and scored a really good goal and I thought here we go we’ll be alright, but we just stepped off the pedal again and let them back in it. We let them gather momentum and they got the goal.

“I think we should’ve done more when they had the lad sent off to try and nick it but I think today I was probably glad when the referee blew his whistle because it was hard work.”

Bury made a confident start and Crosdale and Khalid Mohammed combined with some neat build-up play inside the Dale area, but the latter blazed a left-foot shot over the bar.

The Shakers did break the deadlock in the 10th minute when Robert Bourne’s cross from the right wing was converted by Crosdale.

Dale responded positively and almost restored parity just five minutes later. Louis Coyne rose highest following a corner but his header was brilliantly tipped onto the post and away to safety by Bury keeper Michael Papastylianou.

Rick Ashcroft’s Dale team levelled the scores though inside half hour mark. Callum Schorah overlapped on the left flank and floated the ball towards the far post and Smalley finished the move off in emphatic style.

Bury who were without leading goalscorers George Miller and Nathan Turner thereafter struggled to turn possession into chances to the frustration of their manager.

“George Miller’s our top scorer and gives us a lot of pace and energy in behind,” Kidd added.

“Without him it just showed what we’ve been missing and sometimes you have players in your system that you probably take for granted.”

“It tested the squad a little bit and I think we still got in great areas but our quality let us down. But credit to the lads, they kept going. I never felt a threat of losing the game. I always thought we were slightly on top.”

“One or two lads that have been doing really well didn’t do as well today so we were slightly off colour,” Kidd continued.

“We’ve been doing well this season and to get a 1-1 draw in a derby at home still isn’t the worst result, but I’d want us to go and win the game.”

Rochdale who were on top immediately after the restart saw Papastylianou deny Matt Gillam from close range.

However the major incident of the second period came just after the hour mark when right-back Mata was booked twice in three minutes and dismissed. Rochdale Under-18s manager, Ashcroft was aggrieved by the decision.

“I think the referee makes it really hard for himself with the first booking that wasn’t really a booking,” Ashcroft said.

“There was, if anything, minimal contact and I wouldn’t be surprised if there was no contact, so he makes it really hard for himself. If he does that then everyone gets booked so he’s got to be consistent.”

Jake Durham was unable to find the target for the home side with a couple of late attempts as Rochdale held firm for an unlikely draw.

“We did quite well today,” Ashcroft added. “The dynamics of the game changed after the sending off which was disappointing. I thought if we had kept 11 men on the pitch, we probably would’ve gone on to win the game.”

The result lifts Rochdale up a place to 12th, while Bury missed the opportunity to go top, instead remaining second, just one point behind their next opponents Walsall.