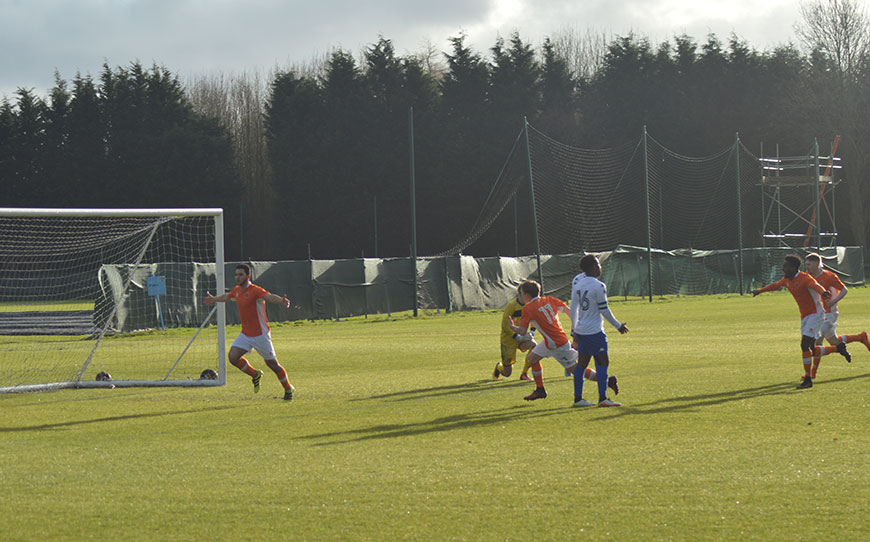 By Owen Keighley: Blackpool produced an imperious performance, smashing 9 goals past Bury to move back to the top of the North West Youth Alliance on Saturday.

Sebastian Des Pres, Finlay Sinclair-Smith, Tyler Rufus, a brace from Ralph Chea and a four-goal salvo from Rowan Roache ensured the Seasiders made a “real statement” in their push for the league title.

Blackpool made a dream start and were five goals up after 15 minutes. The rout began in the 5th minute when Des Pres scored a wonderful solo goal evading challenge after challenge to roll the ball past Owen Brooke.

The away side then turned on the style as they scored four goals in six minutes and played some outstanding football as an understrength Bury team struggled to cope.

Dylan Sumner and Ben Jacobson combined to set-up Chea for the second and Roache quickly added the third.

Sinclair-Smith latched on to a loose ball in the penalty area or Blackpool’s fourth but their was no easing of the throttle and Roache then tapped in his second of the game.

The Republic of Ireland youth international completed his hat-trick shortly after the half-hour mark when Sinclair-Smith found space on the left and delivered a cut-back that he duly finished off.

Roache took his haul to four with a fantastic individual goal as he skipped past two challenges before smashing the ball across Brooke into the far corner to give Blackpool an incredible 7-0 lead at half-time.

Two minutes into the second half and Blackpool made it eight when Sumner’s shot was parried by Brooke and Chea followed up for his second of the afternoon.

The Tangerines completed the scoring when a Roache free-kick was met by Rufus leaving academy manager Ciaran Donnelly delighted by the margin of victory and a sixth successive win that returned them to the top of the Youth Allaince:

“It was a brilliant performance, a phenomenal performance and a real statement.” Donnelly said.

“To come to third in the league and win resounding as that, it’s about time people took note of our players and the players were bringing through. I’m sure when I speak to the first team manager about our performance today and how dominant we were, he will want some of our players to be tested at the next level.”

Bury academy boss Mark Litherland conceded that it had been a difficult experience and a steep learning curve for a team containing four Under-16 players.

Very difficult morning for us, but a good learning curve for us really.” Litherland said.

“We had four under-16s and two second year scholars playing, so it was difficult for us physically. Short term today it wasn’t great, but we’ve got a great conveyor belt here and were getting a lot of lads through to the first team at the moment, which means young lads have to play for the youth team,” he added.