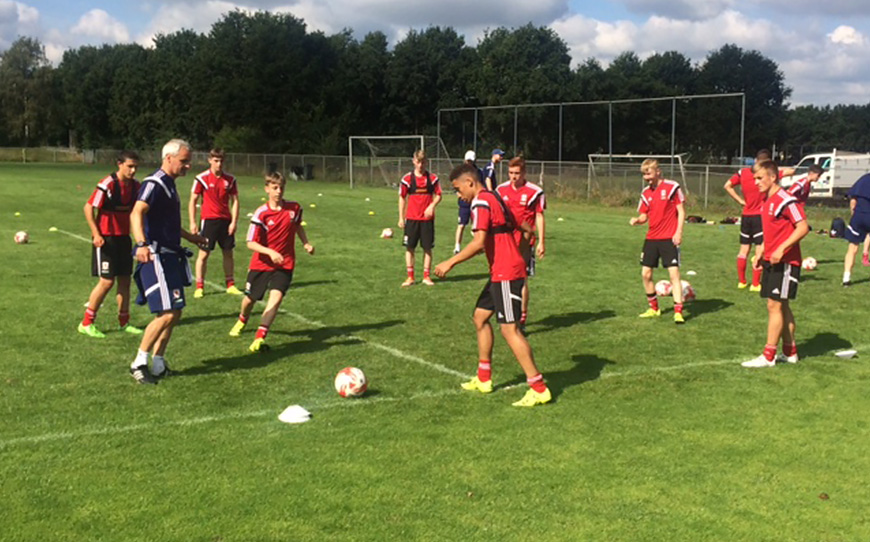 The tour started with a shaky landing to a wind and rain swept Dutch runway but things soon started to run rather more smoothly.

The bus ride from the airport to the hotel was shorter than expected, plus we played cards which also helped pass the time. The packed lunches we had were nice, however I think some of the boys are stuck in their ways and weren’t keen on the different style of ham.

After a brief stop at the hotel we set off on a walk to find our training pitches, which took us some time after we ended up going in the wrong direction! Once we found them, everyone seemed pleased with the facilities that were on offer. Once we got back to the hotel we had our first night of food: bolognese. I think most people thought it was alright but maybe only as a one off!

We got down for breakfast at 8:30, where we had our cereal and scrambled egg. After that we got ready for training and walked across to the training pitches for a 10:30 start. It was a good morning session and the standard was better than I thought it would be. Lunch that day was more bolognese with salad. In the afternoon we had more training which included everyone’s favourite drill: shooting practice.

After that we took in the sights of The Netherlands by taking a long walk around town, looking at all the shops before we then headed back to the team hotel. Dinner was, once again, bolognese but this time with some chicken and fish. In the evening we had some free time, much to everyone’s delight as it gave us a chance to relax and play games.

This morning was the same as yesterday in terms of breakfast, but this time we had a training match against Bury FC to look forward to. Unfortunately I couldn’t take part in the game through injury but it was a good run out for everyone as the players not on the pitch were still working off it. Towards the end of the game a big thunderstorm hit the area which made the game very difficult and quick, however we pushed on and ended up winning 1-0. We had lunch at the usual time and then in the afternoon we had our pool session. It was quite hard but also fun as there were some games involved. We went for a walk around Venlo town and visited the shops to buy some snacks and drinks for the evening. For dinner there was, surprise surprise, some more bolognese which people may be getting bored of already! To be fair there was also some very nice steak and fish on this occasion.

We started off the day with the same routine as usual and set off for training at 10:00. Today was exciting though as we had training from guest coaches from VVV Venlo. The training session started quite slow in the morning, but once it got going everyone really enjoyed it. After a spot of lunch in the afternoon we trained in the VVV Venlo stadium on a very good artificial pitch. Training with the guest coaches was great and we all picked up some helpful tips, although I think some people had problems understanding them sometimes!