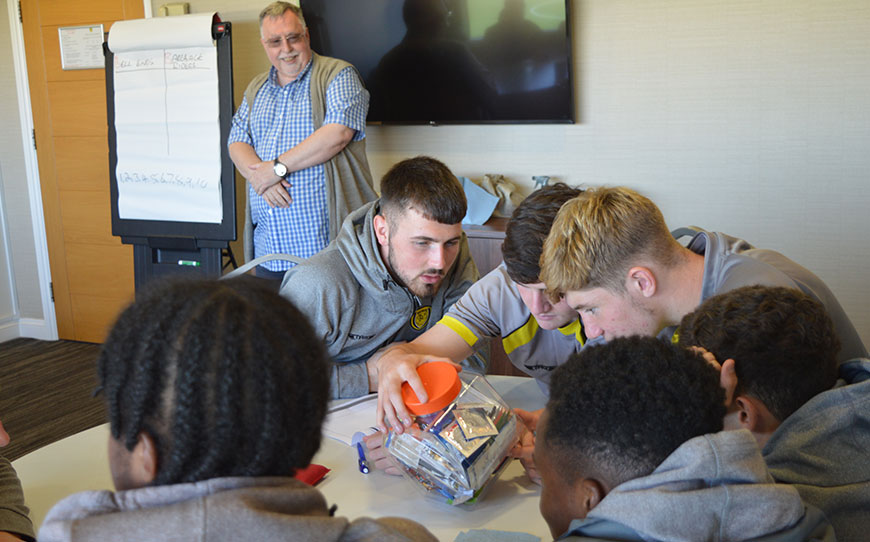 “What I want them to do is remember how much fun they had learning,” Avery told LFE. “The more we can keep them involved and have some fun, while at the same time getting across some really crucial messages to them, then that’s a success for me.

“Once you’ve raised an issue and put it in a context that’s relevant to them as a young footballer, that always makes them aware of what the potential consequences of their actions or inactions can have on their careers and personal lives.

During the two-hour seminar, the apprentices split into two groups and compete against each other in answering a number of questions, where they learn several facts and figures relating to the various sexual health subjects.

The youngsters take part in practical activities with self-check apparatus and safe sex protection and delve into extended discussion about the sensitive issues, while relevant case studies are also included throughout to highlight the ever-present risk to physical welfare. “In the overall health and well-being of these young men, sexual health is equally important to how you eat, exercise and look after yourself mentally,” said Avery. “We look at testicular cancer and it is important to put that into the context of other footballers.

“Some outcomes have been successful in terms of people who have been treated and continued with their careers and lives, but we also highlight the circumstances, like with former West Ham United Academy player Dylan Tombides, where the outcome was not what you would’ve wanted.

“When we’ve done testicular health in the past with other clubs, people have had conversations afterwards. Others have admitted that there are issues with their relationships that they’ve not felt comfortable about sharing.

“It’s important to stress to the lads that it’s alright to say this is a situation that’s affected me. We’re challenging the attitude of what does it mean to be a man. To be a man is to be vulnerable and prepared to share and not be afraid to do that. That’s not being weak, that’s being strong.

“It’s about sending that message – not only to your teammates, but also the people who will watch you on the pitch and admire and look up to you – that if you’re willing to be open about saying ‘this is what’s going on for me’, then hopefully that will be mirrored in their lives as well.”

Burton Under-18s duo Ciaran Gilligan and Said Idouarab acknowledged that the thought-provoking session provided them with a wealth of insight to absorb and be mindful of. Seventeen-year-old midfielder Gilligan said: “I’ve not really had anything like this since I was at school doing sex education, so it’s good to refresh the knowledge two or three years on from that.

“The sexual harassment examples were an eye-opener because there are so many factors that can go against you, even if you wouldn’t necessarily consider something an issue at the time. It can have massive repercussions on your career and life in general, so it’s important to be careful.”

Meanwhile, first-year apprentice Idouarab added: “Sexual health is not a hot topic in the changing room or around the club, so it’s good to share our thoughts with everyone and actually think about these things.

“The number of people that are affected by STIs was a lot higher than I thought and Colin added context to the information, with actual examples. It’s not just what could happen, these things have happened to people, which I found quite shocking and hard-hitting.”

This feature is included in Issue 39 of LFE’s Touchline magazine.