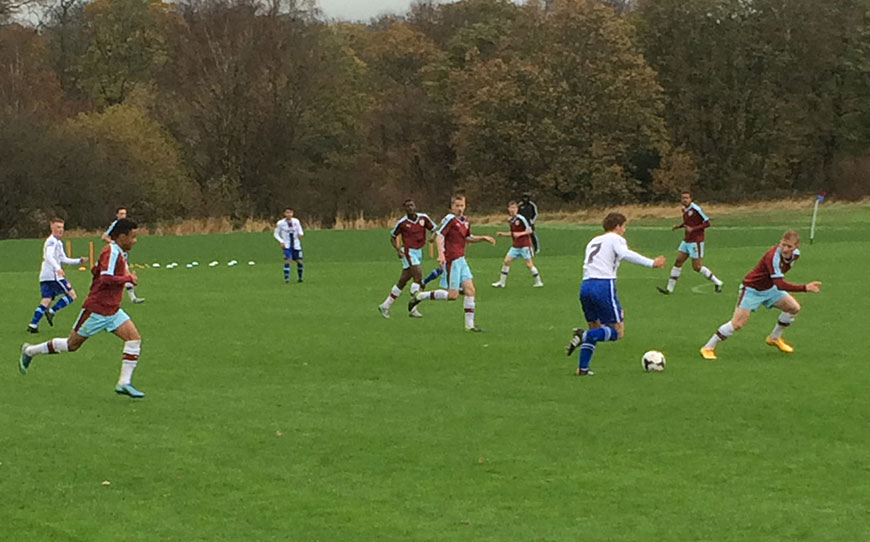 By Chris Coates: A late goal from Tobias Hayles-Docherty helped Walsall Under-18s to a 2-1 victory at Burnley Under-18s at Gawthorpe on Saturday.

Goals from Jordan Sangha and Hayles-Docherty ensured that the Saddlers maintained a fine recent run of form that seen them remain unbeaten since a 1-2 reverse at Wrexham in early October.

In that time they have scored 12 goals and won three out of four fixtures.

Tinashe Chakwana’s equaliser just before the break was a bright spot for The Clarets who have now lost their last six on the trot.

Despite this latest set-back coach Andy Farrell insisted that there were plenty of positives.

“It was pretty even, I think the draw would have been a fair result,” Farrell said.

“I would say they’re probably the best group we’ve came up against. That’s probably why they’re sitting near the top of the table.

“I spoke to the boys at the end of the game, they’re disappointed, but more about the result than the performance.

“There’s a lot of positives. There’s certain aspects we’ve been working on in training. We’ve been talking about movement at the top end of the pitch, coming in from the flanks and running in behind.”

“I thought Tinashe (Chakwana) was bright. With a little rub of the green he maybe would have scored a goal or two more.” Farrell added.

The visitors took command of the game early on. Operating a high defensive line, Walsall were able to pen their hosts in their own half.

Maziar Kouhyar was the first to go close for the visitors – latching on to left winger Will Shorrock’s pass, Kouhyar rounded the keeper with ease but there wasn’t enough power on his shot and Burnley’s Billy Grogan was able to clear on the line.

Burnley attempted to respond. Olatunde Bayode found space in the box, but could only fire over the bar from near the edge of the box.

With half an hour gone and the game settling into a lull, Sangha received the ball around 25 yards-out, and without wasting any time unleashed a stunning strike in to the top left hand corner to give Walsall a deserved lead.

The goal seemed to rouse Burnley and they grabbed an equaliser seven minutes later. Some nice interplay down the right led to a cross and Chakwana was handed the simple task of tapping the ball in at the back post.

The second-half was an even affair with both teams having their moments.

However as Burnley pushed for a winner, a well worked Walsall counter proved their undoing. After some good work from Kouhyar, Shorrock found himself unmarked in the penalty area and his pass left Hayles-Docherty with a simple finish in to an empty net.