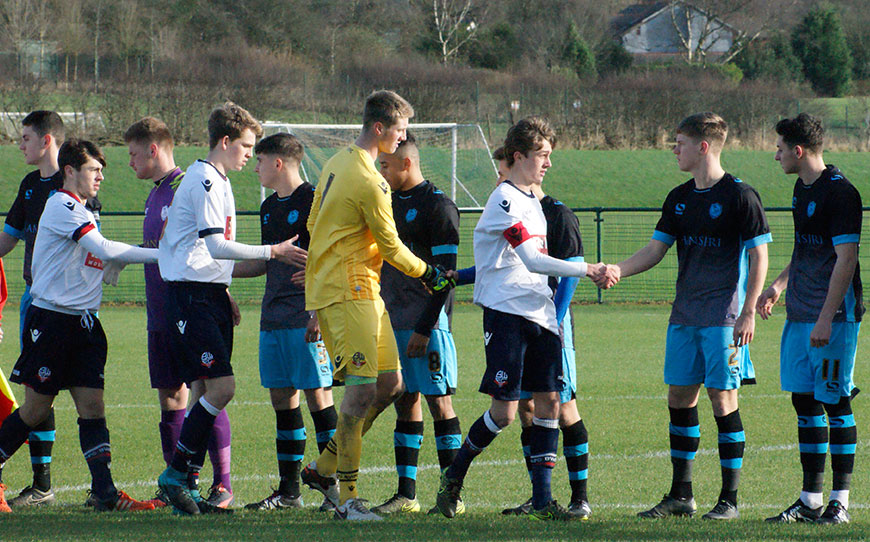 Bolton ended a run of four successive league defeats with a goalless draw against Sheffield Wednesday at the Eddie Davies Football Academy on Saturday.

Wanderers had conceded 15 goals in their last three games in all competitions, but held onto their first clean sheet since the reverse fixture at the end of October as both teams struggled in gusty conditions.

“I think it was quite an even contest,” Bolton Under-18s manager, David Lee told LFE. “Both teams competed well and at the end of the day I thought it was probably a fair result.

“We always try to play a passing game but the conditions weren’t the best. It was blowing a gale out there which is not conducive to good football.

“Overall, I was pleased with the application and individuality of the players today. They closed people down, worked hard and sometimes you need a bit of luck in front of goal and unfortunately we had a couple of chances that we couldn’t get on target.”

Wednesday made the brighter start as they forced keeper Jake Turner into action inside the opening ten minutes when Matt Penney connected with a shot on the half-volley from just outside the penalty area, stinging the palms of the Trotters stopper.

Turner was again involved just moments later as he tipped Fraser Preston’s deflected left-foot effort from distance over the bar, before denying Jake Nicholson from close range soon after.

But goalmouth action proved a rarity for the remainder of the first half as both sides were ineffective in adapting to the blustery weather.

After the restart, the hosts finally recorded a shot on target as Max Allen tried his luck from range, but keeper Dan Wallis comfortably held the strike.

The Owls enjoyed plenty of possession in the second half, but were unable to carve open the resolute Bolton defence.

And with time running out, the visitors thought they had broken the deadlock when George Hirst, recently called up to the England Under-17 squad, converted a one-on-one situation, but was deemed offside despite the away protests.

Wednesday persisted in punting balls into Bolton territory, but failed to penetrate the stout Wanderers defence. And the hosts almost snatched an unlikely winner in the final moments when Enock Likoy-Elumba threaded a pass through to Tyrell Palmer but his low drive from the right side of the area was hit straight at Wallis to ensure a share of the spoils.

“Generally I felt we were comfortable,” Owls Under-18 manager Paul Murray said.

“I believe with the possession and the chances we had, we probably should have won the game.

“George Hirst did score today but it was disallowed. We believe it was onside after looking at the footage but that’s the way it goes.

“We’ve only kept two previous clean sheets this season, so that’s another one notched on there and we’ve come away from home and not lost the game which is always the aim.”