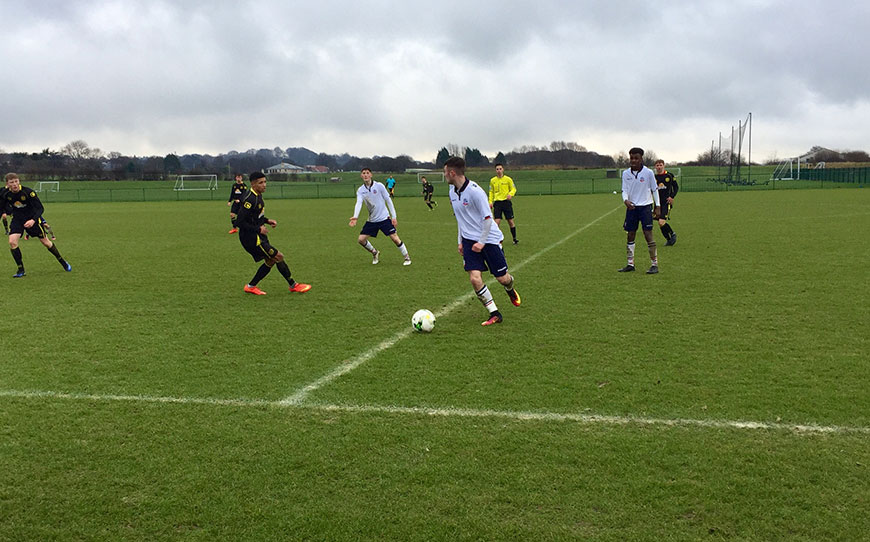 By Michael Ogara: Bolton Wanderers U18s bounced back from their defeat last week with a 3-2 home victory against Crewe Alexandra at the Eddie Davies Football Academy.

On a wet and windy day in Bolton, it was the home team who dominated the early proceedings.

A combination of high pressing and intricate passing play down the right flank of Crewe’s defence, saw Romanian winger Dennis Politic put a low driven ball into the box, which the keeper did well to deal with.

Politic opened the scoring for the Wanderers midway through the first half, when he went on a driving run past two Crewe defenders and rifled the ball home.

The Whites increased their lead, when Matthew Fearnley fired the ball across the Crewe box and it took a deflection off a defender into the goal.

On the stroke of half time Crewe got back into he game via the penalty spot. Politic’s reckless challenge was punished in full as Luke Walley cheekily chipped the ball down the middle of the goal.

The Bolton coach did not condemn Politic though but stressed that he can improve his all round game further.

“Dennis has got unbelievable talent” Spooner said. “On the ball, he creates things. It is so exciting to watch and coach. He still has to learn those little bits about his defending and his roles and responsibilities off the ball.

“He gives away a penalty, meaning that all his good work is a negative,” he added.

Crewe equalised through Walley but Bolton were not to be denied.Wanderers reacted well and pushed for a winner which came from a Luca Navarro corner to earn all three points for Nicky Spooner’s side.

Crewe manager Lee Bell reserved his praise for Walley but insisted that his team need to show more.

“Walley was easily our best player on the day, but the mentality has got to change from the Crewe players,” he said.

“They’ve got to want to win some football matches and learn how to defend. The last thing we spoke about was clean sheets and Bolton could’ve easily had about eight goals.”