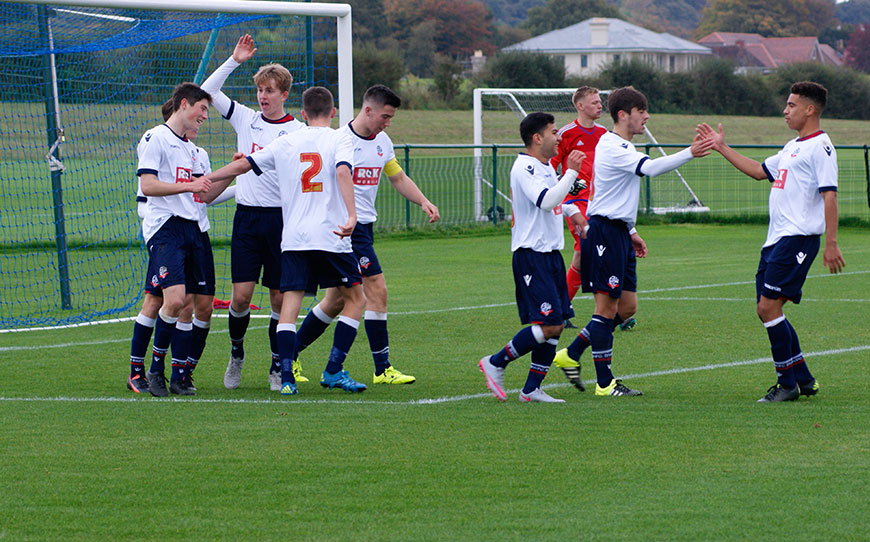 By Euan Holden: Bolton and Cardiff preserved their unbeaten starts to the Under-18 Professional Development League as they played out a 1-1 draw at The Eddie Davies Academy on Saturday.

Bolton who finished the match with ten men, after full-back Jack Everest received a straight red card in the second half for a dangerous tackle, opened the scoring through Ryan White but the Bluebirds responded to claim a point via Jarrad Welch’s strike.

Both sides struggled to create goal-scoring chances in the opening section of the game, however Bolton tested City’s goalkeeper Scott Coughlin from distance.

The home side had the first clear chance as White went through on goal, only to be denied by Coughlin low to his right. It didn’t take long for White to go one better as he finished off a superb move to dink the ball over Coughlin from 12 yards out after 36 minutes.

Bolton Under 18 coach, Nicky Spooner, said: “We started really well. We’ve come out lively, after 20 minutes we started to really control the half. We scored a goal and then I feel we should have pushed on and got another goal. We should have been better in the final third.”

Instead it was Cardiff who delivered a sucker-punch to level a minute before the interval when, Welch blasted in a superb low effort from the edge of the box

Cardiff appeared to take some momentum into the second period and a tactical switch from a back three to an orthodox back four also gave them a platform to take control of the game.

Bolton were thankful for the form of goalkeeper Jake Turner, who made several superb stops to prevent his side from falling behind particularly after Everest’s dismissal just after the hour mark. The young full-back lunged into a tackle to retrieve possession after a Bolton counter attack had broken down.

Spooner added: “He’s tackled in the wrong way. Fifty per cent of referee’s referees would send him off the other fifty per cent would’ve given a yellow card.”