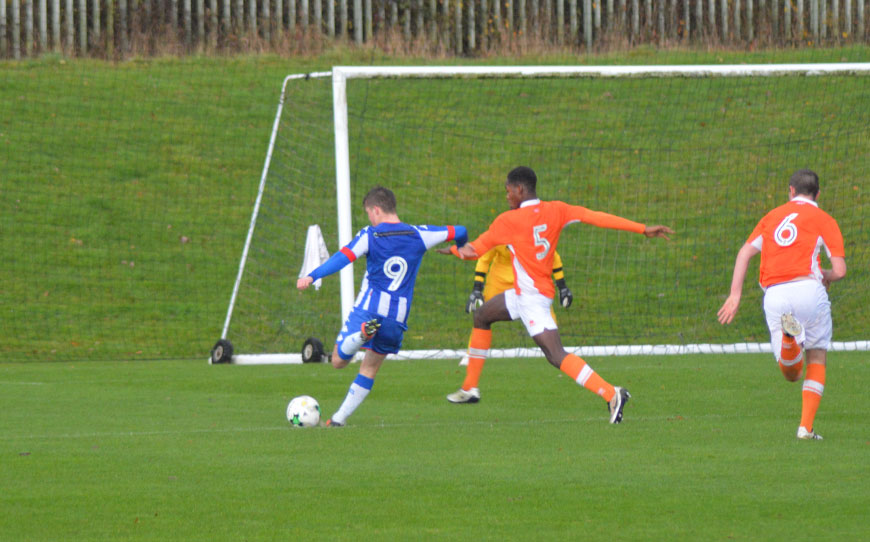 By Owen Keighley: Wigan Athletic U18’s fought back from two goals down to draw 2-2 with Blackpool U18’s in a game of two halves at Christopher Park on Friday morning.

Although this match was originally scheduled to be played in Blackpool, Wigan became the home side after a late switch in venue, bot that it affected the Seasiders who got off to the perfect start when Christian N’Guessan picked up the ball 25 yards out and unleashed an unstoppable strike into the top left corner.

Blackpool should have made it 2-0 after 22 minutes after great build-up play between Jack Newton and Finlay Sinclair-Smith saw the latter find space in the box but his strike found the side netting.

Six minutes later, the Seasiders doubled their lead when a Rowan Roache free-kick could only be parried by Theo Roberts, and Ralph Chea bundled in the rebound to but Blackpool in a commanding position.

Wigan almost got back into the game on the stroke of half time when Nathan Randell’s cross found Tom Powey unmarked in the box but his strike was straight at Jack Sims.

Like Blackpool in the first half, Wigan got off to a flying start to the second half when Callum Lang calmly slotted home to get the home side back in the game.

Blackpool thought they had a third goal after 55 minutes when Sinclair-Smith found the net but the linesman had his flag up for offside.

Sinclair-Smith again was involved when his strike on the edge of the box was superbly tipped away by the impressive Roberts in the Latics goal.

Eight minutes from time Wigan completed the comeback when captain Matty Taylor found space on the edge of the box and his strike deflected into the bottom corner.

Blackpool had a great chance to snatch all three points in stoppage time when Roache was sent clean through but his powerful strike was tipped over the bar by Roberts.

Wigan Under-18’s manager Nick Chadwick, expected his side to respond after the first half:

“I wasn’t happy with the first half, we were slow in and out of possession and we didn’t have the same intensity to our play like we normally do.

“Second half we were better, our willingness to press and play was much better and we got our rewards.

“Overall I’m disappointed, I think we can play better than that but credit to the lads, they came out at half time and responded well so a big credit to them.”

His counterpart, Ciaran Donnelly, felt that his Blackpool players deserved more than the eventual outcome:

“First half I thought we were terrific, I thought it was as well as we’ve ever played and as well as I’ve ever seen an under-18 team play,” Donnelly said.

“Half-time came and we told the lads they’d come out and give a reaction and try and get an early goal – and that was exactly the case.

“It gave them a lift, they pressed us and rightfully got an equaliser, we kicked on in the last 10 minutes and probably should’ve got a winner.

“There’s some real good signs, we’ve got really good individual players and on another day we could’ve won 4 or 5-0 because we deserved to be in front more than what we were at half-time.” 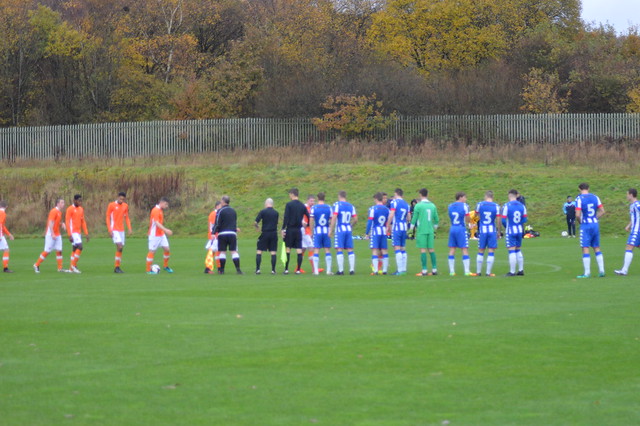