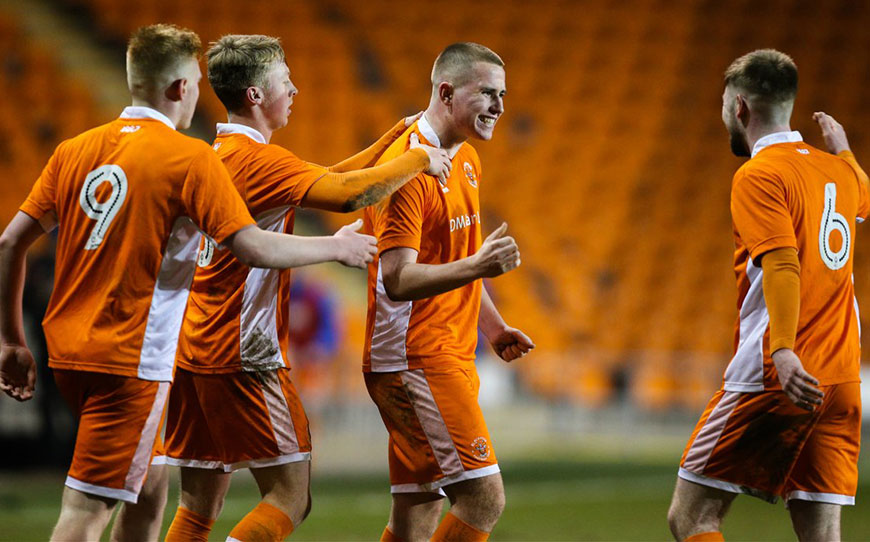 By Nicholas Dusabe: Ben Jacobson’s second-half equaliser rewarded a spirited display from Blackpool Under-18s as they earned a 2-2 draw against Arsenal Under-18s in the FA Youth Cup semi-final first leg at Bloomfield Road.

The Premier League giants twice took the lead through Tyreece John-Jules and Xavier Amaechi, but were pegged back by goals from Dylan Sumner and Jacobson, while Seasiders stopper Craig Thordarson also saved a second-half penalty from Trae Coyle.

The Tangerines are aiming to become the first third-tier club to reach the final for 30 years, but were missing talisman Rowan Roache, with the second-year apprentice on international duty with Republic of Ireland Under-19s. Meanwhile, Arsenal also had a key absentee in Reiss Nelson, who had joined up with the England Under-19s squad.

Despite Nelson’s absence, the Gunners dominated the early proceedings, commanding the majority of possession, although they were unable to trouble Thordarson in the Pool goal.

The first clearcut chance of the game fell to the hosts as Finlay Sinclair-Smith found space outside the area, but failed to strike his effort cleanly enough to beat keeper Arthur Okonkwo.

The deadlock was broken on the half-hour mark when a corner deflected into the path of John-Jules inside the six-yard box, with the striker reacting quickly to fire home.

Having fallen behind, the home side responded well and managed to restore parity before half-time. Nathan Shaw produced some trickery to beat his marker, Vontae Daley-Campbell, down the left flank before whipping in a dangerous cross that Will Dunne nodded down for Dylan Sumner to place a shot past the helpless Okonkwo.

Blackpool started the second-half as they ended the first, with Okonkwo alert to deny a header from Dunne, as well as Owen Watkinson’s effort on the rebound.

And the hosts were caught off guard when Daley-Campbell surged forward from right-back, skipping past two defenders and delivering a perfectly-weighted pullback for Amaechi to finish off.

The Londoners then had the chance to double their advantage from the penalty spot just moments later after substitute Bukayo Saka was fouled in the area by Will Avon. However, the Seasiders were handed a lifeline as Coyle saw his tame penalty saved by Thordarson.

Arsenal maintained the intensity and forged another glorious opportunity to create a two-goal cushion when Saka was played through on goal, but Thordarson was once again on hand to thwart the danger.

The Blackpool keeper’s heroics spurred the home side forward and enabled the team to get back on terms with 15 minutes remaining as Jacobson capitalised on a huge error from Thordarson’s opposite number, with Okonkwo mishandling a lofted cross into the area, allowing the Blackpool captain the simple task of slotting the ball into the empty net.

The visitors piled on the pressure in the latter stages but Blackpool remained resilient to hold on for a draw, keeping the tie in the balance ahead of next month’s second leg at the Emirates Stadium.