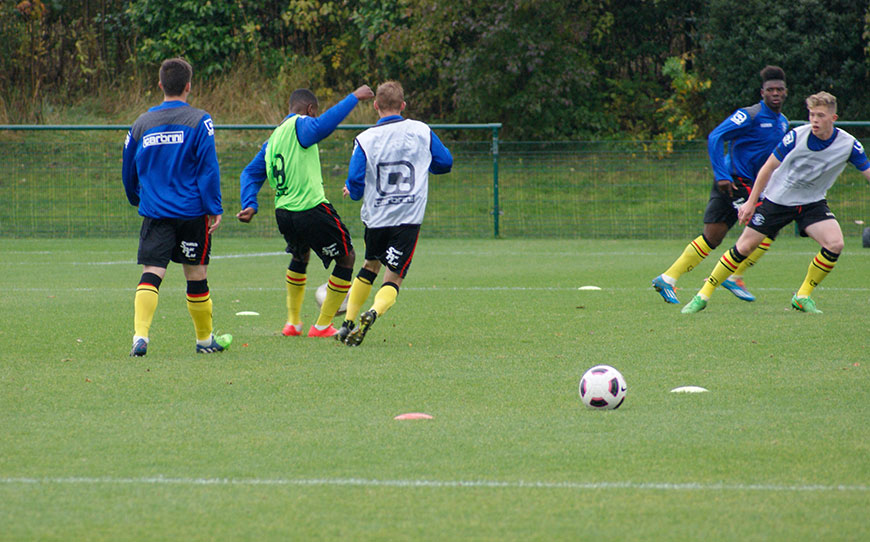 Some of Birmingham City’s Under 18 players have been putting their hand-up in training as potential stars of the future according to academy coach Steve Spooner.

The Blues youngsters were recently led in training by first-team manager Gary Rowett and Spooner, who watched his team fight back from two goals down to win at Bolton last Saturday, has said that experience boosted several of his starlets.

“There’s no greater thing for a young player than when your first-team manager takes one of your sessions,” Spooner told LFE.

“You want to impress and it was a good session for the manager.

“It gives him a good opportunity to see the young players because he doesn’t always get the opportunity, so it was good to run the session.

“And then it was great for them to try to put something in the manager’s mind to say ‘look at me’ and there were one or two that did that in the training session.”

The Blues have relied on their academy to produce a steady stream of first-team players in recent years. The likes of Demarai Gray, Reece Brown and Viv Solomon are some of the most recent names to step off that production line.

“The strength of our football club is our unity within the club and we’ve seen that with players that have come through,” Spooner added.

“In the past there’s been Redmond, Mutch, Butland…and that’s the strength of the football club. If the players do well enough they will get every opportunity and there’s one or two today that you look at that kind of performance and think they could do it; they could make it in the first team.”

One player who has particularly impressed this term is 17-year-old striker David Popa, whose development has been recognised by being part of LFE’s XI for October.

“David has been excellent all year and he’s scored some outstanding goals,” Spooner continued. “He’s in the 21s and there comes a time where you have to leave Under-18s football and move to the next level and David’s doing well enough.

??“There’s still areas of his game he knows he’s got to work on but he’s showing more aggression this season than he has done before which is something that I think was lacking in his game when you look at his frame.
“But he’s got pace and he’s an outstanding finisher so they’re great qualities for a striker to have,”?? he added.