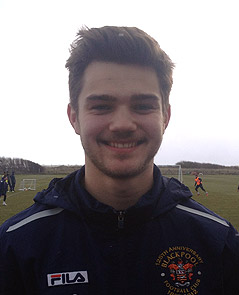 Blackpool’s Louis Cross has been named as LFE’s Apprentice of the Month for February 2013.

Centre-back Cross, who is captain of the Seasiders’ U18 team joined the club as an 8-year-old. While regular appearances for Blackpool’s development squad this season mean he is in the frame for a professional contract, a recent injury has allowed the youngster to focus his efforts solely on his college work.

He recently completed his BTEC Extended Diploma, gaining triple distinctions which will may prove important if a deal is not forthcoming at the end of the season.

“Louis interacts well with the other lads and shows natural leadership skills even in the classroom,” said Steve Legg, his tutor at Blackpool Sixth Form College.

Cross, and the rest of his youth-team colleagues have also raised much needed funds towards helping former Tangerines coach Gary Parkinson return to his family home. Parkinson suffered a stroke in 2010 and has been paralysed with locked-in syndrome ever since, a condition which had until recently required 24-hour residential care.

“Louis has been a model apprentice,” said LFE Regional Officer, Craig Skinner. “He has conducted himself in an exemplary manner and has been a credit to the club – and himself.”

“With his talent and work ethic I am sure he has a bright future ahead of him.”