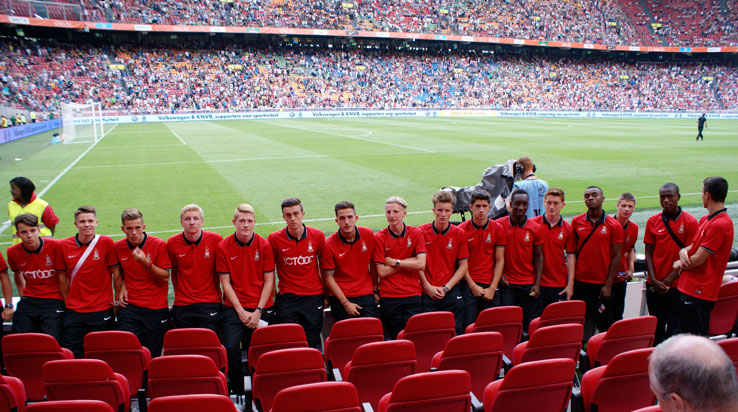 We were up early on Sunday and all the lads were looking forward to what was to come. It was a two hour transfer from the hotel in Deldon to the Amsterdam Arena. This is the home of Ajax Football Club but also hosts International matches and music festivals.

The first thing we visited was ‘The Wall of 100’ where all the players that had played over 100 games for Ajax were named. Some of the players included Johan Cruyff, Zlatan Ibrahimović and Luis Suarez.

From there we went pitch side to take pictures and learn more about the stadium itself. To finish we watched a short video about what the Amsterdam Arena is used for and all of the big events that have taken place there including the Europa League final between Chelsea and Benfica. From there we travelled the short distance into the city centre where we were given the opportunity to look at the attractions and get a taste of the Amsterdam culture.

We took part in the LFE tweet tour which involved finding and visiting a list of attractions in small teams and tweeting a photo of the group in front of it. The losing team had to serve the rest of the team at dinner.

After the visit to Amsterdam we travelled back to De Teokomst where we had a Q&A session with Edwin Van der Sar and his son Joe who plays for Ajax youth team. The lads found it very inspirational and they all agreed that the most valuable thing they both said was to always work hard and go the extra mile.

Later we took our seats pitch-side for Ajax v Pec Zwolle in their version of the community shield. It was good to get a chance to see Dutch football live however we were a bit disappointed with Ajax as they had a young side out so they weren’t their usual full force. But the atmosphere from the away end was very good and it rounded off one of the best days in the best possible way.

Our next game was on the Tuesday against FC Twente. The game was in the afternoon so we all took the opportunity to have a lie in and a late breakfast. After prepping for the game we had a short drive to the FC Twente training facility which was very impressive.

We played against their under-17 side and controlled the early stages but they came back into it after the first 15 minutes. It was all square until mid-way into the first half when Dylan (Mottley-Henry) drove in from the by line before crossing the ball to Reece (Webb-Foster) to tap home at the back post. At the start of the second period we pressed them high up the pitch and Callum (Chippendale) stole the ball and slide Reece (Webb-Foster) through to slot home from the edge of the box.

At this point we felt like we should have taken the game to them and scored more but that didn’t happen and we allowed them back into the game. We didn’t allow them many chances but they did score a late conciliation goal.

The following day started off with a recovery swim in the hotel pool to help get ready for the LFE Tournament that takes place on the Friday. After lunch we went on a bike ride from the hotel to Deldon town centre. The peloton was led by Ricardo but ‘Team Sky’ consisting of Kesi (Omolokun) the pace maker and James (Pollard) the sprint finisher came through to win. Unfortunately Somali (Ciisse) and Callum (Chippendale) couldn’t handle the intensity and speed of the peloton and went over their handlebars! We returned back to the hotel to finish the day off with team bowling.