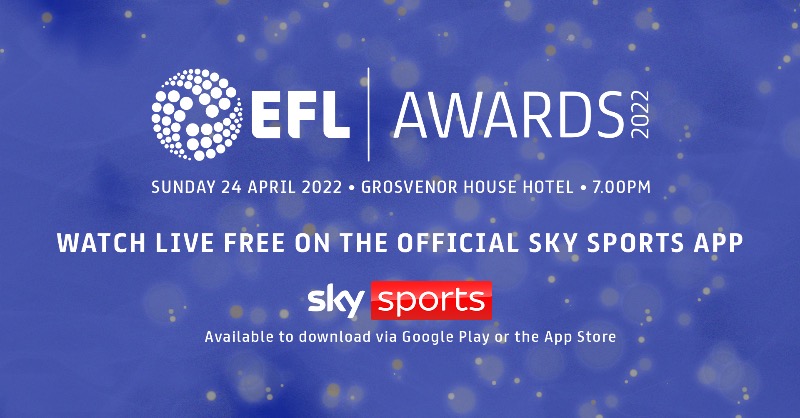 The EFL have announced that this season’s highly anticipated EFL Awards will be available to watch live and for free on the Sky Sports app on Sunday evening.

Hosted by Sky Sports presenters Bela Shah and David Prutton, the Awards will be streamed on the app from 7pm, live from the Grosvenor House Hotel in London.

Celebrating the EFL and EFL Youth Alliance season for both on and off field achievements, the Awards are split into three sections, with the approximate timings as follows:

Supporters will be able to watch the evening’s entertainment unfold, with either Ryan Howley (Coventry City), Jordan James (Birmingham City) or Jevon Mills (Hull City) being named as LFE’s Apprentice of the Season for the Championship.

In Sky Bet League One, defenders Ayodeji Elerewe (Charlton Athletic) and Michael Williams (Crewe Alexandra) are up against striker Freddie Draper (Lincoln City) for the Apprentice of the Season for League One.

While in Sky Bet League Two, Alex Aitken (Stevenage), Junior Tchamadeu (Colchester United) and Ethan Brierley (Rochdale) are in contention for the Apprentice of the Season for League Two.

Elsewhere, eight former apprentices are also shortlisted for awards, with all three players shortlisted for the PFA Players in the Community accolade coming through League Football Education’s Apprenticeship Programme.