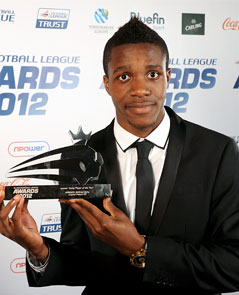 Crystal Palace’s Wilfried Zaha has been named the npower Young Player of the Year at this year’s Football League Awards.

Having come through the ranks at Selhurst Park, Wilfried was handed his full professional debut for Palace on the opening day of the 2010-11 season, bagging a goal in the 3-2 win over Leicester City.

The quick, tricky winger has since gone on to cement his place in the Eagles first team, showing exceptional promise including his man-of-the-match display in the Club’s historic Carling Cup quarter-final win over Manchester United at Old Trafford.

His eye catching performances have since earned his first call-up to the England U21 squad.

On winning his award, Zaha said: “Based on what I have achieved this season I thought I had a good chance.”

“To go from a whole season where I scored just one goal in 44 matches to this, netting seven or so this year has been good for me. I really feel that my game is getting better with every match.”

“My defensive play, as well as my attacking game, is coming on really well. Dougie has been a really positive influence on my progress, because he used to be a striker he has provided me with advice about my all round game.”

When assessing the category, judges looked at Football League players that are either under 21 years of age, or turned 21 during the 2011-12 season.

The panel was looking to recognise the players they felt had made the most significant contribution and impact in their respective first team this season.