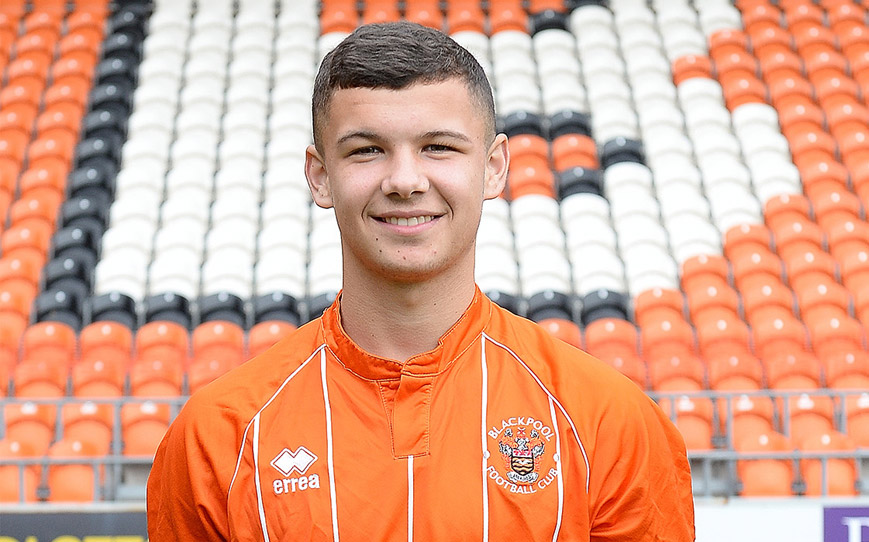 By Karan Gadhia: Not many full-backs score hat-tricks but Blackpool’s Macauley Wilson has now completed the trick twice this season.

The Seasiders full-back first registered a three-goal haul in the same game against Shrewsbury Town earlier in the season and he achieved that feat again last Saturday as Blackpool came out 4-3 winners in seven goal thriller against Walsall.

Ciaran Donnelly, Blackpool’s Academy manager admitted it’s a first as far as he is concerned. “It’s quite baffling for a right-back to score a hat-trick twice in one season and there’s nothing to say that he can’t do it again,” Donnelly said.

“He’s a magnificent penalty taker so we’re really pleased with that but what we also like about Macauley is that he’s willing to put his head where it can hurt. He’s a good finisher and he scored two excellent goals. One was a header from a wide free-kick and it was a great header and a ball in from another cross which was really well taken.”

“It was similar to the [Mathieu] Flamini chance when Arsenal played Chelsea the other week. Macca showed that he’s got the techniques that maybe Flamini needs to aspire to!”

Aside from the goal-scoring prowess of his right fullback, Donnelly expressed his delight at the return to full fitness of long term absentees Jack Sims and Alieu Njie.

With a hectic period of nine matches in five weeks approaching the reappearance of the duo into Blackpool’s Under-18 squad couldn’t come at a better time.

“It is a positive and it is making things hard for me because we have a squad of eighteen [players] now so I had to leave two lads out of the squad which is obviously disappointing to them but it’s just a message to the lads really that you should never take your place for granted,” Donnelly said.

“It’s great that we have some injuries coming back so we have a fully fit squad and it makes it more competitive to get into the team. I’m going to have more disappointed faces that I’m telling that they’re left out but that’s part of the job at any level.”

“Hopefully, with so many games in such a short space of time, we’ll have plenty of bodies to get through that. I’ve told all the lads that we’ll need all of them at some point.”