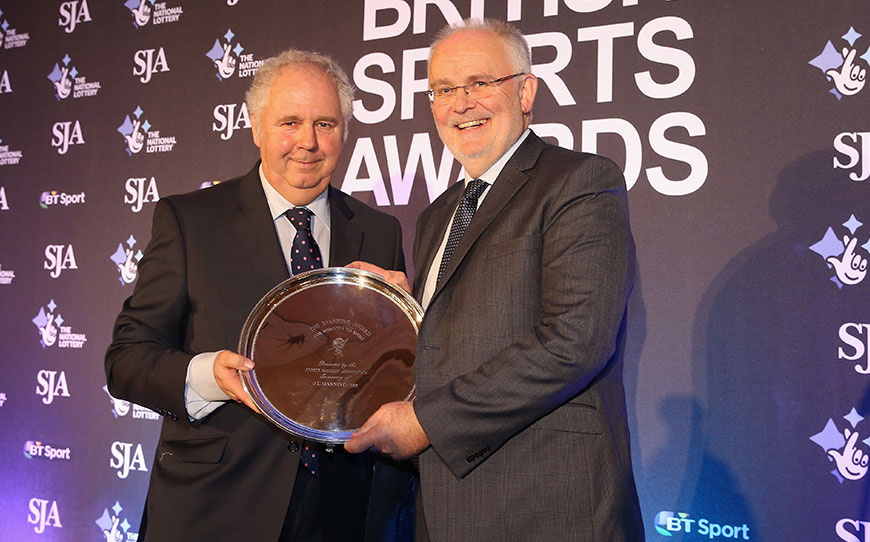 The Football League’s Chief Operating Officer, Andy Williamson, has been recognised for his services to sport off the field of play by the Sports Journalists’ Association at the British Sports Awards.

Williamson, who is retiring at the end of this season, after over 40 years of unbroken service to The Football League, collected the prestigious JL Manning Award.

Now 61, Williamson who played a key role in the formation of LFE and is a current Trustee of the organisation, is widely acclaimed across football for his firm but even-handed management of club issues and his commitment to fair competition between clubs.

During his career he has been personally involved in many of league football’s defining moments including the introduction of three points for a win (1981), the League’s first title sponsorship (1983) and the introduction of the Play-Offs (1986) – the finals of which moved to Wembley in 1990 at his personal instigation. In 2012, he was awarded the OBE in recognition of his outstanding contribution to football.

Williamson was presented with the award at the SJA ceremony in London, attended by nearly 400 guests from sport, politics and the media, and joins a list of recipients that includes Sir Ian McGeechan (1997), Sir Bobby Charlton (1998), Sir Clive Woodward (2003) and Lord Coe (2012).

“It’s a great honour to receive recognition with this award, particularly when you look at the previous recipients,” Williamson said.

“It was an excellent ceremony; a very prestigious occasion with numerous awards for many sporting icons.

“I’ve had a lot of positivity since I announced my retirement – from people from the past and from the present – and it’s a great privilege to be recognised by the Sports Journalists’ Association.”