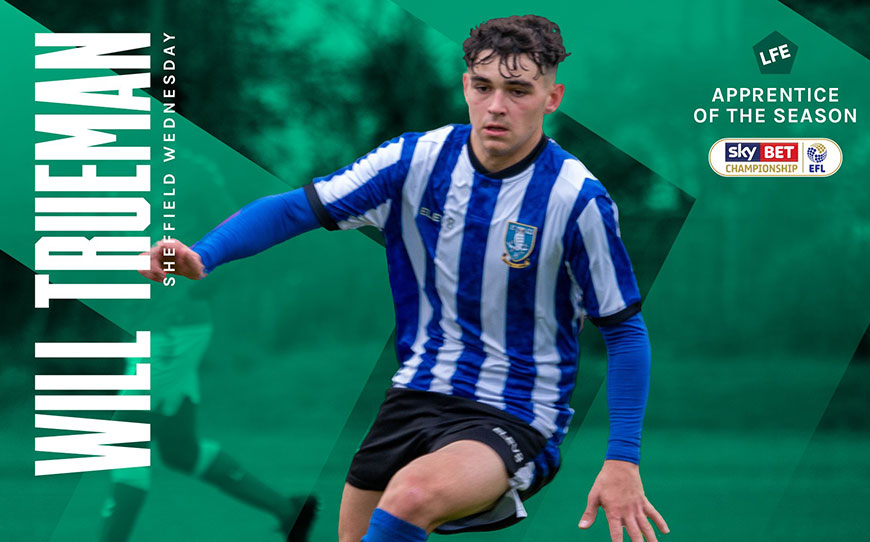 Throughout his apprenticeship, Will Trueman has been a great ambassador for Sheffield Wednesday, showcasing tremendous professionalism on and off the pitch.

The young midfielder has overcome injury setbacks to make positive strides as a player this season, becoming a natural leader for the Under-18s and progressing into the Under-23 group.

In the classroom, Trueman has achieved the highest possible grade profile of D*D*D* on the BTEC Extended Diploma – equivalent to three A-Levels – while he is one of the first apprentices in the country to undertake and complete the new Sporting Excellence Professional (SEP) qualification.

Additionally, the 18-year-old has made an impact in the community, representing the club in distributing Christmas hampers at a homeless charity, while he also completed a three-year school project that resulted in him conducting charity work in Lesotho, Africa.

“Will is an outstanding young man and has continued his excellent development throughout the apprenticeship,” Steven Haslam, Academy Manager, said. “He is a valuable player in our youth team and has stepped up to form part of our Under-23 squad during his second year on the programme.

“Will is highly regarded by players and staff at the club. He is testament to our values of developing good players and good people.”

Youth Coach Andy Sharp added: “Will has had a progressive and positive second year of his scholarship, experiencing some challenges in relation to form and injury that he has worked to overcome.

“He has recently put a significant amount of effort into developing his physicality by engaging in extra strength and conditioning training, which he will see the benefits of. Will is developing his understanding of the in and out of possession principles of the game and understands the importance of having clarity around expectations on him in these areas before a game.

“His attitude has been consistently outstanding during a challenging period, he has always been receptive of feedback and seeks to develop his understanding further.”

The Owls teenager, whose great uncle was the late Fred Trueman OBE, has not allowed his footballing talent to stop his studies and commitment to education, achieving exceptionally high marks and even being named Head Boy at St Bernard’s Catholic High School.

Trueman was described by staff as “a fantastic student and a bright boy with a promising future, who has represented the school on many levels.”

Head of Education & Welfare Dan Potts said: “Will achieved excellent GCSE grades and we identified him as a learner who was able to take the BTEC Extended Diploma. He has worked hard during the course and achieved his target grades, which are the highest possible.

“He is always willing to help staff and the other players and has been an excellent role model for the new apprentices who joined this season, under very challenging times. Will has shown he is as driven off the pitch to all elements of the education and Life Skills programme as he is on the pitch.”