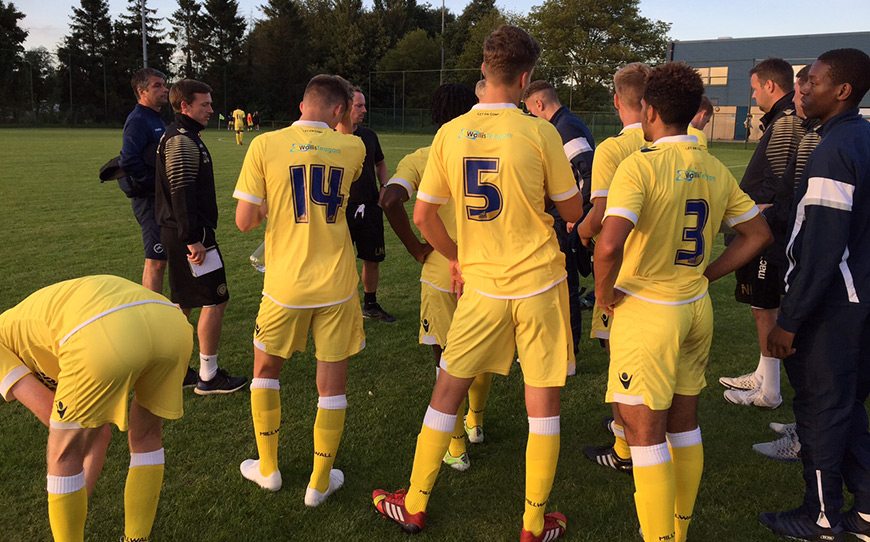 By Gavin Willacy: Millwall controlled their second tour game from start to finish yet were nervously protecting a single goal advantage with just 12 minutes left, until Matt Day doubled their tally to make the game safe.

On a lush surface and on a beautiful sunny evening, David Connolly’s team started strongly creating a series of chances. Right winger Alex Mulrooney-Skinner tormented Beveren’s left back, drawing a series of fouls as the Belgian skipper lunged in repeatedly.

On the half an hour mark the young Lions went ahead. Striker Mikael Ndjoli was put through on the right and took his time to finish coolly. Ndjoli was not even supposed to be playing but was promoted from the subs bench when Kyren Mundle-Smith’s ankle injury failed to survive the warm-up.

The lead was nearly doubled immediately. Left back Noah Chesmain cut a swathe through the Belgians backline and fired straight at the keeper, who parried the ball upwards. Chesmain headed it back towards goal only for the keeper to recover well and pluck it out of the air.

Then Day dribbled delightfully across the box from right to left but his good work was undone by a tame finish.

Having rarely threatened in the first half, Beveren dug in after the break and made it a tighter game, While Connolly and Larry McAvoy elected to make two changes to their side with centre back Rian Bray replacing Ryan Green and Ebere Eze coming on for Matthew Campbell.

Eze provided some lively touches on the left flank but it was still tight when Beveren’s left winger fired only inches over the bar. Millwall responded positively to that let off, doubling their lead on 78 minutes when Day, who was put through by James Fitzgerald, rounded the keeper and slotted into the net.

The Lions then produced the move of the game. Ebere stroked a glorious curling pass, with the outside of his foot, to dissect the home-team’s central defender and left back to find Mulrooney-Skinner and in the blink of an eye he applied a fine finish to score what appeared a fabulous team goal.

However the Lions celebrations were cut short as the officials ruled that the winger had strayed into an offside position. Repeated viewings of the video post-match failed to confirm whether the winger was level or just offside, though any cause for concern was allayed when Day final put the game to bed twelve minutes from time.

Beveren had the last effort, Harry Girling relieved to see a shot drift inches wide after he had raced out to deal with a breakthrough.

Connolly was pleased with the win, the clean sheet and the performance as Millwall move on to Eindhoven on Saturday for a tough test against PSV, looking to complete a third straight win on tour.