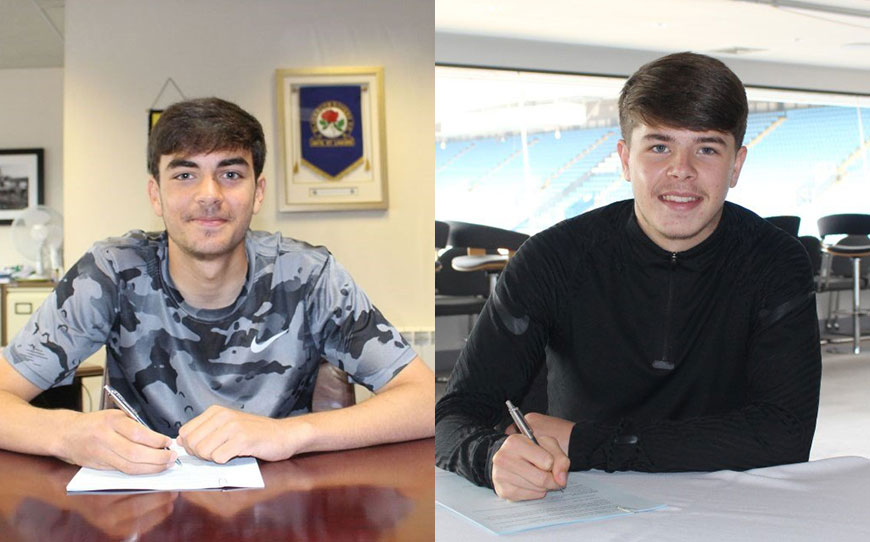 Blackburn Rovers have held on to two of their academy starlets, with Zak Gilsenan and Jared Harlock penned their first professional contracts with the club.

Gilsenan has previously been on the books of Barcelona and Liverpool, while Harlock also spent time at Liverpool in between two spells at Ewood Park, initially joining as a six-year-old and then returning at Under-14s level.

Both prospects have agreed deals until June 2023 having impressed during their two-year apprenticeships.

Perth-born Gilsenan, who has been involved in a Republic of Ireland Under-19s training camp recently, contributed to Rovers’ run to the FA Youth Cup semi-finals last season and has made further strides this year, top-scoring with seven goals, including a hat-trick against Manchester United.

Meanwhile, midfielder Harlock was a mainstay in the Under-18s and has progressed to Under-23 level, featuring 11 times and helping them secure a fourth-place finish in the Premier League 2 table.

Playmaker Gilsenan told the club website: “This is a massive moment, which myself and my family have sacrificed a lot for, moving countries just to help me with my dream, so it’s great to sign my first professional contract and I’m really happy to do it here at Rovers.

“I feel like it’s been a good back end to the season for both myself and the team. I was happy to contribute with seven goals and five assists, which is always nice, but it’s been a massive team effort, so all credit to the players and the coaches.

“I can’t wait to make the step up to the Under-23s because I love a challenge and hopefully I can fit in quickly. Seeing players that I played with last year make that step up and do well – being in the title race for so long and coming fourth in the league – gives you confidence that you can do the same.

“I’m still growing and getting stronger and hopefully I can just keep developing here at Rovers. I want to come back for pre-season in the best shape and as fit as possible, and then look to hit the ground running.”

Harlock added: “It’s a great feeling to sign because I’ve really enjoyed being here for the last five years. I’m made up to sign and I can only thank Rovers for all that the club have done for me.

“This is just the start now, it’s something that me and my family have dreamt about, getting that professional contract. It’s a dream come true and now it’s about getting ready to kickstart the season.

“Rovers is a great club and there’s plenty of opportunities for players here. I’ve seen a statistic recently that showed how there has been an academy graduate in the squad for the last 500 first team games. Hopefully I can take an opportunity if it comes my way next season.

“We’ve got a real bond here among our group, we’ve got a spirit and I’ve grown up with a lot of the young lads who have progressed from the academy. I want to get a spot in the starting team for the Under-23s next season and show my ability in front of the gaffer to hopefully get involved in the first team at some point next term.”