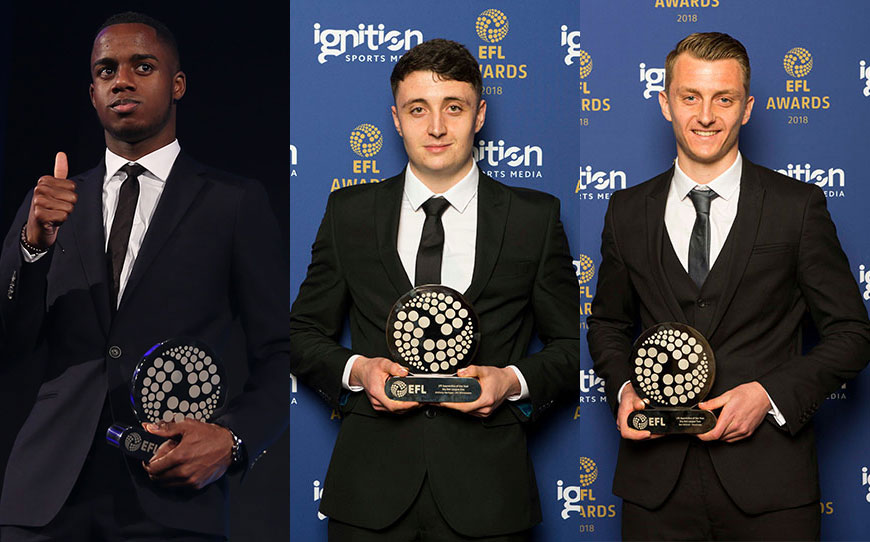 The three winners of this season’s LFE Apprentice of the Year awards have been announced at the EFL Awards on Sunday.

Here’s a look at what made the trio the top candidates for each league:

Not many apprentices have been able to make an impact at first-team level like Sessegnon has at Craven Cottage.
The 17-year-old has gained admirers from across the globe with his remarkably consistent displays and is currently a leading figure in Fulham’s push for promotion to the Premier League.

Sessegnon was thrust into senior action immediately after beginning the apprenticeship programme, becoming the first player born in the year 2000 to score in the Championship in August 2016, a week before collecting his GCSE results.

The left-back turned left-winger amassed 30 appearances in his debut campaign, earning a place in the PFA Championship Team of the Year before taking his exploits onto the international stage, winning the UEFA European Under-19 Championships with England and ending the competition as joint-top scorer.

Having resisted the temptation to join one of the top teams in the Premier League to instead sign his first professional contract with the Cottagers, Sessegnon has gone from strength to strength, contributing 14 goals in 46 appearances during the 2017-18 season, including a hat-trick against Sheffield United in November.

And despite his incredible success on the pitch, the teenage star has put in extra hours to remain on track to complete his BTEC qualification, while his first-team commitments mean he has conducted a significant amount of community work, making him a high achiever in all aspects of the apprenticeship.

AFC Wimbledon may have endured a tough season fighting for survival in Sky Bet League One, but for Hartigan it has been a memorable breakthrough year.

The 18-year-old enjoyed a successful start to his apprenticeship by penning a professional contract shortly after his 17th birthday in January 2017. Two months earlier, the midfielder had won LFE’s Goal of the Month for November after finding the net with an audacious effort from the halfway line.

Hartigan, who has been nominated for Wimbledon’s Young Player of the Year award, signed an extension to his initial deal last August having made his debut in the Carabao Cup against Brentford, as well as a league bow at Fleetwood Town. And he celebrated his new contract with a first senior goal in a 4-3 Checkatrade Trophy victory over Barnet.

In all competitions, the teenager has made 16 first-team outings, including a brief cameo at Wembley Stadium in the FA Cup against Tottenham Hotspur in January. A knee injury has curtailed his campaign since then, playing just once since the cup clash, but the spell on the sidelines has enabled Hartigan to focus on completing his education to the best of his ability.

Stevenage defender Wilmot has established himself as one of the most sought after youngsters in the country after a series of impressive displays in the senior side.

The 18-year-old signed a professional contract towards the end of his first year and went on to be selected in LFE’s ‘The 11’ in October for his impact on the pitch combined with academic success, achieving high grades on the Extended Diploma and completing his NVQ Level 3 qualification early.

Wilmot was an influential member of the Under-18 team that progressed to the fourth round of the FA Youth Cup and has become a first-team regular since the turn of the year, although his debut came in October in the Checkatrade Trophy against Milton Keynes Dons.

The highly-rated teenager has amassed 15 appearances in total, attracting the attention of numerous top-flight clubs, with Stevenage reportedly demanding a seven-figure sum to prise him away from Broadhall Way.

Wilmot also received international recognition with a call-up to the most recent England Under-19s squad, appearing as a late substitute against Latvia before playing the full 90 minutes of a 2-0 defeat to Macedonia.