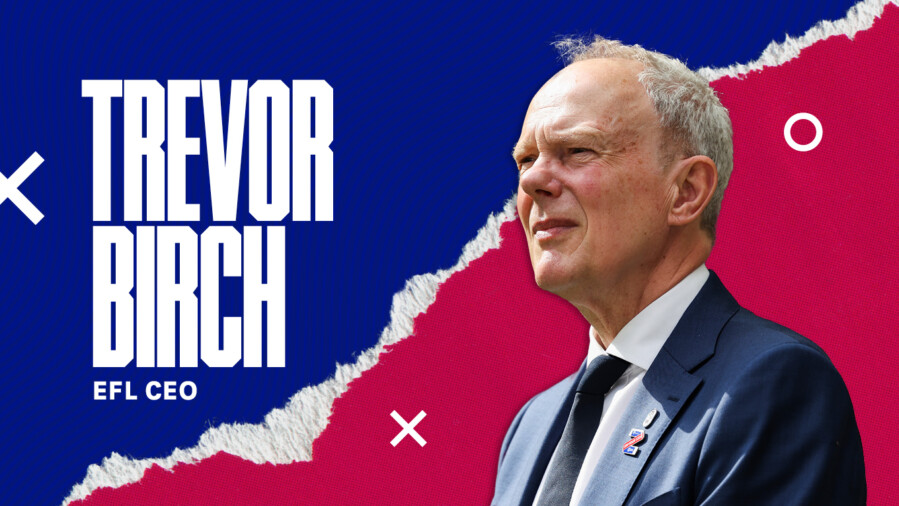 Speaking to LFE, the EFL chief executive is reflecting on his time as an apprentice at Liverpool Football Club in the 70’s, during the club’s most dominant spell in its 130 years of existence.

“Originally, Bob Paisley was the physio, because he had been on an FA Coaching course for a couple of weeks,” he jokes. “There was no full-time physio, doctor, massage therapist, nothing, and yet they managed to produce footballers.

“It is a completely different game now – unrecognisable. It has gone into the stratosphere with all the developments in staffing and infrastructure. We have an elite programme now, with lots of people doing great work.”

Four decades have passed since the 21-year-old Birch – an exuberant striker blessed with natural speed and flair, and an ability to produce moments of magic with a mazy run – pulled on the iconic red jersey of his boyhood club. As he points out, the radical advancement in facilities, resources and technology is clearly visible within the game today. Yet the wounds caused by failing to fulfil the potential he once possessed have never truly healed.

“I was always a bit aggrieved that I didn’t ever get the chance to play in the first team at Liverpool,” he says. “Feeling that you are good enough but not being given an opportunity to prove it is extremely frustrating. I still feel now that I was good enough.

“I could have signed for anybody in the country when I was 14. I had all these offers, but I was only ever going to go to one club. Choosing Liverpool was perhaps a mistake looking back because they went through their most successful period ever and therefore opportunities were remote.

“When Bob Paisley brought me in and said, ‘you’re not going to make the first team,’ it was like the entire world completely collapsed. Even though I was then sold to Shrewsbury Town, as their club record signing, and went on to win the third division championship, it never really compensated for that initial setback. It certainly didn’t help when I was then sold to Chester City as replacement for Ian Rush, their club record scorer who had scored 46 goals the previous season, and I fell a tantalizing 45 short the following season!”

Birch’s journey will resonate closely with those who hit a similar obstacle while in pursuit of their dreams. It is a story that emphasises the importance of LFE’s holistic approach to the current apprenticeship, where the personal development and life skills programmes serve to soften the blow for those that drop out of the game and supply them with the skillset needed to thrive in wider society.

In Trevor’s case, it was his unique resilience and inner drive that led him to the top of another career, and, more recently, into one of the most influential positions in English football. The experience has given Birch an ardent appreciation for youth development and an ambition to create more pathways within the EFL for its young players to blossom.

“How do you know they are not good enough unless you play them?” he says. “That is my message to clubs today. Playing them in the first team, when they have got the crowd, adrenaline and better players around them is different than playing them in an Under-23 fixture.”

His advocacy of giving youngsters an opportunity on the first-team stage is nothing new. Prior to joining the EFL in January 2021, Birch had been employed in a variety of executive positions at several different clubs, from chief executive at Chelsea, Everton, Derby County and Sheffield United, to chairman of Swansea City and director of football at Tottenham Hotspur. At all those clubs, he kept a close eye on what was happening beneath the first team.

“Having not been given an opportunity myself, when I was in the clubs, the thing that would give me more pleasure than anything else was seeing the junior, home-grown players coming through the ranks and playing in the first team. For me, nothing beats that.

“The odds are heavily stacked against these young players, so it is unreasonable to expect to get everyone through, but the objective should always be to get more players through the system who go on to have a career in football. I would like to think that with the training programme that is in place now they will be more balanced and well-rounded individuals if they do not make it.

“I also believe it is important to give them opportunities so that they do not necessarily feel as though the world has fallen apart if they don’t make it. If they are academic, let’s encourage them and give them the opportunity to continue with their education. It can give them that outlet. If football is getting too intense or football isn’t going too well, they can shift their focus towards their education, and vice-versa.

“I do think having some kind of educational or vocational parallel with your football helps give you that balance, as opposed to just football – all your eggs in one basket and then suddenly it all disappearing.”

Birch, as he candidly admits, did place all his eggs in one basket and from the age of 16 to 19, did ‘absolutely nothing’ away from the pitch to prepare for life after football.

“I was going to be a superstar,” he says. “When that does not happen, you can get sour about the game because you don’t think it has treated you properly or you haven’t reached the heights you should have done. And that’s what I did. I left the game and I didn’t really want to know.”

Like many other transitioning players – including LFE Regional Officer Paul Bartlett, who ironically played against Birch for Derby County Reserves in 1977 – he eventually made use of the bursary provided by the Professional Footballers’ Association to fund a degree in chartered accountancy.

“I had done a business course at 19 alongside football, which was general business studies with an accountancy aspect to it and meant taking a day out of football. I found the accountancy elements interesting, and I was fairly good at it, but when I finished playing at the age of 23, I didn’t know what I wanted to do.

“I got the yellow pages out one day and started working my way through the alphabet, calling all of the accountancy firms listed. ‘Hi, I’m an ex-footballer wanting to get into accountancy,’ I would say. I got to the letter ‘S’ before anyone would even look at me.

“One small firm decided to take a chance on me. They said if you are going to do accountancy you may as well do chartered accountancy, which is the top qualification, and for that, you need a degree. So, that was when I reached out to the PFA for funding.

“Because I got good results in my first year, I then reapplied to all the major firms and got a job with one of the top firms in the country in accountancy. I graduated at 25 and that was when I joined EY, before effectively making my way through to partnership. I stayed with them for 20 years and came back into the game with Chelsea in 2002. So, in a way, I came full circle.

“I suppose my story is that it is never too late to start your education. I spent three years doing nothing, which is not particularly the story I want to give, but if you have that ambition, you can progress and be successful.

“It took me a while to recover from not making it, but you have to dust yourself down and go again, don’t you? Nobody can do that for you, that is where your resilience, strength of character and desire to succeed come in.”

The disappointment that Birch felt at the end of that conversation with Paisley still fuels his ambition today, to prove people wrong and be successful in whatever he does, and there are many other skills that he developed as an apprentice footballer.

“For me, that knock back gave me more desire to succeed but also gave me a bit of humility as well,” he reveals. “It made me think, ‘perhaps you are not as good as you think you are’, and so I needed to work harder to prove to myself that I am. But I understand that everyone is different.

“What I can say is that socialisation as a footballer, as well as teamwork, are transferable skills; both of which are incredibly important in any career.”