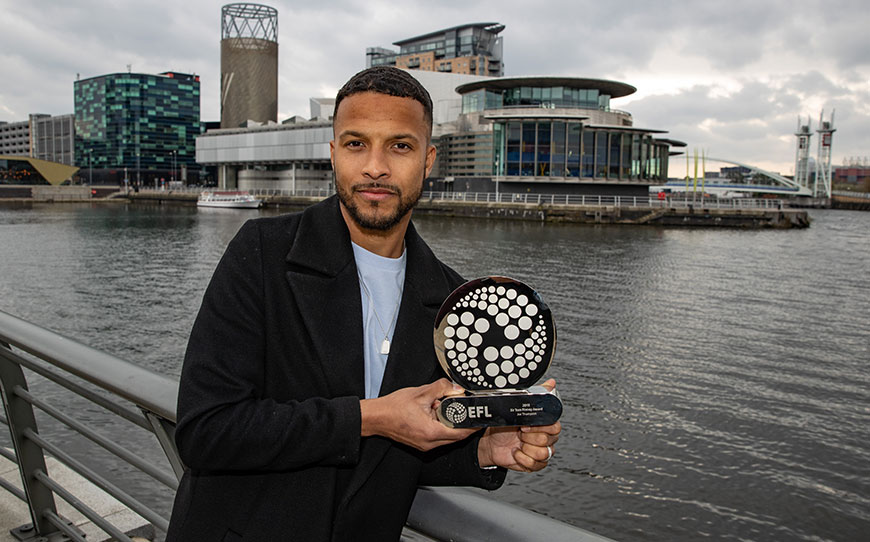 Back in 2007, the Rochdale AFC Academy graduate set the standard for all apprentices to follow, breaking into the first-team while also maintaining a great work ethic in the classroom.

Thompson continued to be an inspiration throughout his career, but despite his impressive tally of over 250 competitive appearances, it is the strength and bravery he displayed off the pitch that will define his legacy.

The 30-year-old was first diagnosed with Hodgkin Lymphoma – a rare form of cancer – in 2013 and then relapsed in 2017. Thompson battled back on both occasions and completed his fairytale comeback with the winning goal against Charlton Athletic on the last day of the 2017-18 season to keep Dale in Sky Bet League One.

“For me to receive the recognition for the Sir Tom Finney Award is amazing,” Thompson told LFE. “I’m truly blessed and to win it in front of so many of my peers and so many of the guys from Rochdale, as well as my wife, it’s a moment I will always savour.

“It doesn’t really differ to the Apprentice award. You’ve got to make sure you’re doing everything right off the field. Back then that was education, but you’re still a role model and responsibilities come with that.

“Being identified as ‘the footballer’ follows you around as a young person in an Academy and so it’s healthy to have another string to your bow. I’m living proof that showing dedication to the academic side of things doesn’t mean that you are limiting your chances in gaining a professional contract.

“I know my mum was ever so proud of that Apprenticeship award and now winning the Sir Tom Finney, she’s proud again because to be recognised for football is brilliant, but for me to be recognised as a good person, first and foremost, is what life’s all about.”

After 13 years as a professional footballer, Thompson called time on his playing days in February, but is already prepared for the next phase of his life and is committed to sustaining his status as a role model for youngsters to admire.

He said: “Football is all I’ve really been good at and that comes natural to me, so to take myself out of my comfort zone and try to inspire and do as much work within the community as possible and pass down my knowledge that I’ve experienced through life and football to the young generation, I think that’s what it’s all about.

“Anything that I can pass down to the younger ones, whether it’s to do with off the field matters or actually playing and training, I’ll do my best.

“I’ve gone into motivational speaking, I’ve gone into working in the media and stuff like that and I see the inspiration that the young ones get and for me that’s where I get my satisfaction now, knowing I’m always helping the younger ones in a positive way.”