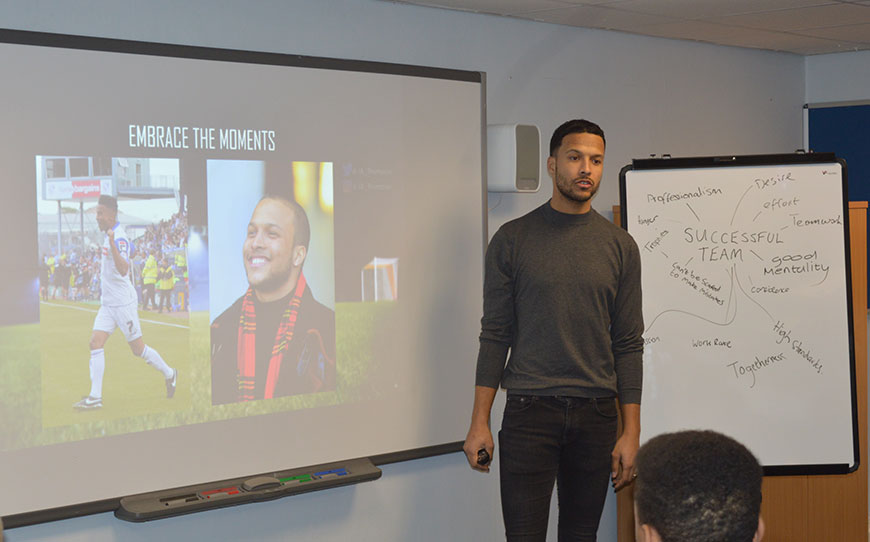 LFE’s Life Skills Programme welcomed Joe Thompson to the growing list of delivery partners this season, with his ‘Darkness and Light’ workshop highlighting his inspirational journey of conquering adversity.

Bolton Wanderers apprentices were among those to experience the talk, which promotes resilience, courage and well-being, as Thompson discusses the lessons learned from his 13-year professional playing career and two battles with Hodgkin Lymphoma.

“The session focuses on resilience and overcoming obstacles in your football career and in life,” the former Rochdale midfielder told LFE. “I got diagnosed with cancer twice and I had to use certain things that I’d learned in football, from managers and mentors and other people within football, and then try to apply them to overcome a setback.

“I’m forever grateful for what I’ve learned along the way and that’s why I think it’s so important to give back to the younger ones because life is to be enjoyed, but I also want them to realise that it is fragile at times.

“I always know going into a session that it’s going to be tough for me to emotionally show up and be honest with them, but that’s the impact. Being raw and true in delivering the message is something that they can take with them.”

Thompson, who collected the prestigious Sir Tom Finney Award in 2019, leads an interactive discussion on being a good team-mate, provoking consideration of key skills that can be used in and out of football.

“Nobody is successful on their own,” he continued. “Particularly at this stage of their career, the better the team is, the more likely their chances are of getting a professional contract.

“That doesn’t mean that those traits won’t transfer to other jobs either. I’m starting to understand that now myself as I start doing talks in banking and corporate environments. Having that respect for a team-mate, giving your all and those fundamental things that you need to have as a person, take you so far.

The one thing I’d really want them to take from my session is to never give up.

“It’s not going to be plain-sailing because success doesn’t just come easily and overnight, there’s a process to it. You’re going to need to show resilience along the way in different areas of your life. Find out what motivates you and hold onto that because it’s about making memories.

“I would also say to trust yourself. Footballer’s often think they can only do football because it’s all they’ve ever known but there are so many transferable skills. It’s tough when you make the transition and it does take you out of your comfort zone, but I wouldn’t fear it, I’d try to embrace it.”

He said: “It’s been a tough season here at Bolton and we’ve all had to be resilient from the start. It’s definitely brought us all closer because we had to play a lot of games and there was a lot of uncertainty about the future of the club, so we had to help each other through it and became strong as a group.

“Joe gave us a different perspective that not everything’s about football and you’ve got to think about your own mental well-being before anything else. He talked a lot about the importance of family and how they got him through a lot of hard times.

“You need to have people that you know you can speak to when you’re going through tough times, so you have to consider the support around you.”

Meanwhile, first-year apprentice Finlay Hurford-Lockett experienced his own personal adversity this year when he required surgery due to an irregular heartbeat, which restricted him to the sidelines for an extended period.

The 17-year-old, who has made three first-team appearances, said: “The club doctor found an issue during a routine scan and I was told that I was at high risk of having a heart attack on the pitch, so I can sort of relate to Joe’s journey, although it wasn’t as bad as fighting cancer.

“I had no symptoms, so it was a big shock, but it’s just made me aware that it’s a short career and it can be taken away at any moment. I’ve also shown to myself that I’m capable of overcoming obstacles and I’ve tried to turn it into a positive.

“It halted my progress, but I’ve recovered and I’m back to full fitness and I’m stronger for the experience, so now I’m more determined than ever to kick on again.”