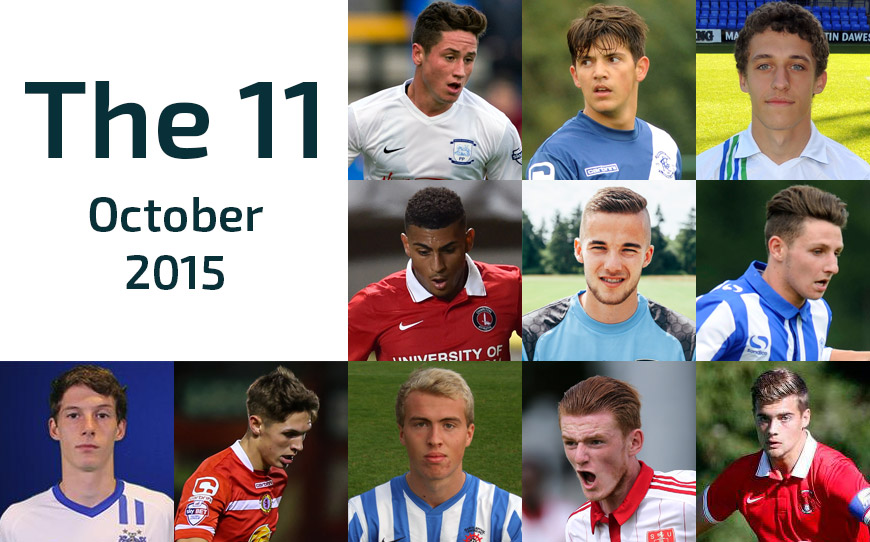 Here is the in depth look at who made LFE’s XI for October 2015 and why they’ve been included:

‘Hail Henry’ is the verdict that comes from LFE’s Tom Palmer. “Academically Henry is completing the Extended Diploma and has achieved Distinctions in all of his Diploma units,” said Palmer. “He is self-motivated and a pleasure to teach.”

And things might not have turned out as they are but for that determination. “Henry was originally released as an Under-16,” continued Palmer.

“He asked if he could continue training with the squad though in the latter part of that season to keep up his fitness whilst looking for an alternative club. During those months Henry proved to everyone around him that they were wrong to release him.”

He did everything that was asked of him in training and more and the decision was reversed with Henry given the 2-year Apprenticeship he’d hoped for. He has been captain of the team and his sheer positive and determined personality makes it better with him in it. Those qualities have been recognised by the Under-21 manager and he has been involved in matches for them.

Away from the pitch, Henry has already achieved his Level 2 Coaching qualification and coached some of the club’s younger age groups. He is also seen as the face of the Cherries Under-18 squad and has played his part in raising money for a local charity. The young man that is the face of that charity is called Mason White (aged 8) who suffers from a condition called Epidermolysis Bullosa and Henry has gone out of his way to make him feel part of the squad.

Romania Youth International David Popa gets Ian King’s seal of approval. Popa who put on a masterclass in the August Goal of The Month competition is now a regular in the Blues Under-21 side. He has completed both Functional Skills courses and is making very good progress on both the NVQ.

“For someone who originates from Romania and uses English as his second language he has progressed remarkably well,” said King. “His review was very good and he is on track to gain a pro contract if he keeps going.”

The 17-year-old centre-back made his first team debut against Leicester in the Capital One Cup in August and then started in the Shakers 2-1 win over Accrington in The Football League Trophy last month.

Both Derby and Everton have tabled bids for the player who is unlikely to remain at Gigg Lane after the January transfer window.

LFE’s Craig Skinner, said, ”Matty is a real prospect so it is no surprise that Premier League and Championship clubs are interested in acquiring his services. He has however remained calm and continued to progress solidly with his education despite all the things going on around him”

Karlan has been a regular member of Charlton’s Championship side this season and has now scored 3 goals for the Addicks. The local lad, who is actually from Charlton, has also played several times for England youth teams.

Having completed his BTEC Subsidiary Diploma at Bromley College, Karlan is now concentrating on passing his Functional Skills. His hard work with tutor Ladoki Toya has seen him pass Maths and he is now working on his English.

Callum Ainley’s fine start to the new campaign has not gone unrecognised at Crewe. The 17-year-old who is the club’s top scorer at Under-18 level, has also featured in the Under-21s and the Alex first team.

With his football going from strength to strength Callum continues to put the effort in at College where he is working towards an Extended Diploma in Sports Performance and Excellence. He has really bought into the education programme that complements his football development and has to date completed ten of the BTEC Units that make up this qualification (5 at Distinction standard and 5 at Merit standard).

LFE’s man in the North East Paul Urwin has nominated Hartlepool left-back Adam Male for The 11.

Urwin said, “Adam broke his leg in a game against Scunthorpe a year ago and has had to undergo surgery twice as a result. During this time he has shown fantastic commitment and courage in the face of adversity following his rehab instructions to the letter and also completing extra units on his Extended Diploma. He has displayed a fantastic attitude through a very tough time.”

Michael makes The 11 after being described as “an exemplary apprentice” by LFE’s Gavin Willacy. He has worked hard in all areas of his game and is playing a senior role in the Under-18s as well as getting valuable experience with the reserves in the Central League.

The centre back from Broxbourne is on course to achieve DD in his BTEC at Rushcroft Foundation School, where tutor Sean Reed has hailed him as a “model student”. Michael has also completed an NCFE level 3 course in Business Management in his own time and is now embarking on a Psychology course.

Preston’s youth team skipper Clive Smith gets Sarah Kayley’s vote. The young defender impressed the first-team staff during pre-season and was named as a substitute for North End’s Championship clash against Cardiff earlier this month.

“Despite often being involved with the first team Clive is working hard in college and is on track to achieve his Extended Diploma,” Kayley said. “He is an extremely likeable young man and his attitude and behaviour on and off the pitch is exemplary.”

“Shea’s doing really well on the Extended Diploma and the tutors have been impressed with him,” Binion said. “He’s the youth team captain, a regular in Under-21 squad and has also captained Northern Ireland.”

“He’s an all-rounder who is performing very well across all aspects of the programme and leads from the front. He’s a real box to box midfielder with good quality in possession. We expect him to be pushing to be a regular starter before not too long,” Binion added.

Bartlett added,” Shea’s really come on but he’s also impressed me off the pitch. He recently organised a mini triathlon involving all the apprentices to raise money for Weston Park cancer charity.”

August Goal of the Month contender Matt Penney also finds himself in this month’s XI. The youngster who has been with the Owls since the age of 8 was nominated by LFE’s Paul Bartlett.

“Matt’s a great lad who is working well on the BTEC Extended Diploma managing his time extremely well. He often arrives early for education session and gets straight down to his work,” Bartlett said. “On the pitch he’s vice-captain of the Under 18s and is also playing and training up with the Under-21 side,” he added.

“Daren has worked so hard both on and off the pitch and is captain of the Rovers Youth team,” said LFE’s regional officer Claire Wilberforce-Marsh. “On his education programme he is hard working and has pushed himself to achieve. He has passed Functional Skills and the BTEC Subsidiary Diploma and is moving up to the full Diploma.”

“This is such a great achievement and a credit to all the effort, determination and hard work he has put in. He has a fantastic personality and is a massive team player who is always willing to help his teammates both on and off the pitch,” she added.