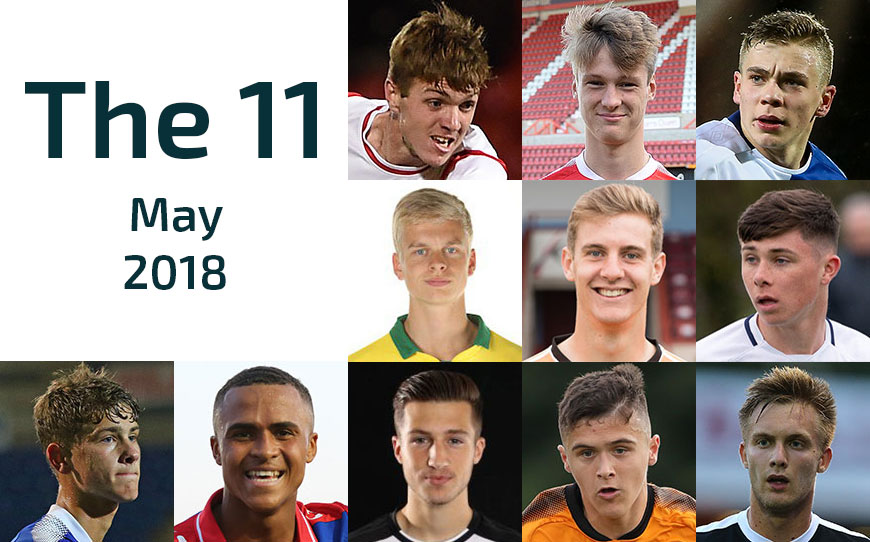 LFE takes a closer look at the players to make ‘The 11’ in May 2018 and why they’ve been included:

Midfielder Jack has been a high achiever on and off the pitch during his apprenticeship, which has led to him earning a two-year professional contract with Rovers.

The 17-year-old was an integral part of Blackburn’s run to the quarter-finals of the FA Youth Cup, grabbing a brace in a 2-1 win against Stoke City along the way, while he has been heavily involved with the Under-23s, amassing 16 appearances this season.

Despite his playing success, Jack has remained committed to the education programme and is set to achieve top marks on his BTEC.

LFE Regional Officer Craig Skinner said: “Jack has shown an outstanding attitude, work ethic and desire to succeed. He has made great football progress and has also been an outstanding student, staying on course for D*D*D* grades.”

First-year apprentice Alex has slotted into life at Chesterfield seamlessly having secured a contract at the club last summer after being released from Sheffield Wednesday.

The versatile defender has established himself as a key member of the Under-18 side and was part of the team that faced Swansea City in the FA Youth Cup third round earlier this term.

Regional Officer Ian King said: “Alex has set an example to the rest of the group by showing excellent application to his overall programme. He has settled in well, performed well on the pitch and in the classroom and is a very good role model for his team-mates.”

Elliot came through a trying year at Dagenham to earn a professional contract and end the season as part of the first-team squad.

The central midfielder led the Daggers to the fourth round of the FA Youth Cup, scoring away at Portman Road in a narrow 2-1 defeat to Ipswich Town, and was recently named Academy Player of the Year by the supporter’s club.

Having moved from Northolt to digs in east London at the start of his apprenticeship, Elliot has adapted well to his new surroundings and was rewarded with his National League debut at Torquay United in February, before appearing on four more occasions for the cash-strapped club.

“Elliot has made terrific progress during his apprenticeship and deserved his promotion into the first-team,” said Regional Officer Gavin Willacy. “He is also heading for D*DD in his Extended Diploma at Barking & Dagenham College, and has passed every other element of his ASE framework with flying colours.”

Cameron was handed his first involvement in the senior team at the very beginning of his apprenticeship having travelled with the first-team to Portugal for their pre-season trip in 2016, appearing in a 5-0 win against Portimonense S.C.

The teenage striker was prolific in front of goal at Under-18 level and has become increasingly influential in the Under-23s this term. In addition, the 18-year-old has also been a model student, completing his studies early despite missing lots of education time due to his impressive progress on the playing side of the apprenticeship.

Regional Officer Ian King said: “Cameron has been outstanding this year and he did plenty of work off his own back to complete his Extended Diploma at Christmas with D*D*D* as well as his NVQ.

“He was also part of the presentation team on the recent collaboration day between the Premier League and the English Football League. Cameron is now a regular member of the Under-23s squad and has produced some excellent performances recently.”

Striker James was the first of Doncaster’s second-year apprentices to complete his education this season, achieving his D*DD target on the Extended Diploma.

Alongside his outstanding academic progress, the 18-year-old also made huge strides on the pitch, making his first-team bow as a half-time substitute in a 1-0 Checkatrade Trophy victory over Sunderland Under-21s in October.

James finished the season as Donny’s leading scorer in the Under-18s and he has also found the net with regularity in the Under-23 team, encouraging the club to offer him a professional contract.

Academy manager Kieran Scarff told LFE: “James has consistently shown a real dedication to his academic studies. On and off the pitch, his attitude and level of focus has been a key highlight.

“James fully deserves the recognition his dedicated approach has provided and we look forward to seeing this progress continue as a young professional.”

Attacker James was a regular for the Under-18s throughout the season and appeared as an unused substitute against Peterborough United in the Checkatrade Trophy in October.

The Cobblers chose not to offer the 18-year-old a professional deal, but James’ excellent performance academically provided him with a route into higher education, earning degree offers from Roehampton, Winchester, Northampton and Loughborough universities to study sports psychology.

“James led the team with his mature and considered approach to every element of being a scholar,” Regional Officer Gavin Willacy said. “Although he was not offered a professional contract, he was professional to the last, working relentlessly to achieve D*D*D in the BTEC Extended Diploma – two grades above his target.”

Icelandic midfielder has done tremendously well academically despite English being his second language and has made significant improvements with his verbal communication through additional tutoring.

Lead Under-18s coach David Wright told LFE: “Atli lives by the values of the club, including most prevalently, integrity. You see this in all aspects of his work – from the grass, gym, analysis and in education. The example he sets helps create the environment where attitude, team work and standards are not compromised.

“Atli is now able to transfer his very good knowledge and understanding to his education and leads by example of what can be accomplished when the scholars set their minds to it. He is taking additional assessments to validate and credit this hard work and achievement.

“In addition, Atli has taken part in a work experience week this season, stepping out of his comfort zone and was able to apply himself with the improvements he has made in communication and social interaction. Atli was not fazed by the new challenge and applied his usual values to the tasks given to him on each day.

“He also visited Clare’s School in Norwich to which he carried himself professionally and appropriately given some of the upsetting or challenging scenes within the day’s visit.”

First-year apprentice Adam joined North End in November 2016 from Ringmahon Rovers in Cork and has settled in quickly, making an impressive start to his apprenticeship in the Under-18s this season.

The 17-year-old was an influential figure in Preston’s run to the Lancashire FA Youth Cup final and made the bench for the first-team against Wolverhampton Wanderers in February having trained consistently with the senior squad.

Adam also recently received international recognition when he was included in the Republic of Ireland squad for the Under-17 European Championship, starting in a 1-0 victory over Denmark, as well as coming off the bench in a quarter-final defeat to eventual winners the Netherlands.

Regional Officer Sarah Kayley said: “Adam works very hard and is a positive influence on the rest of the group. In addition to his success on the pitch, he has maintained focus on his studies and is on target to achieve his predicted grade on his Extended Diploma.”

Adam has performed to an exceptional standard in the classroom, achieving triple distinction star grades in his BTEC despite often having to catch up on work missed due to his involvement with the first-team.

The teenage goalkeeper produced an impressive display during Scunthorpe’s FA Youth Cup loss to Chelsea in December and although he is yet to make his senior bow, the second-year apprentice has appeared on the bench on several occasions and trains with the first-team on a daily basis.

Academy manager Tony Daws told LFE: “Adam has been a terrific role model to the new first-year boys, often helping them and advising them both in football terms and also in the classroom.

“Adam breezed through his NVQ and his coaching badge and achieved terrific grades on his BTEC, gaining impressive comments from the tutors regarding his application on these courses.”

Full-back Joe became the first player born in the 2000s to feature for Swindon when he played the full 90 minutes of a 1-0 defeat to Grimsby Town in April.

The 18-year-old was then a late substitute during a 3-0 win against Sky Bet League Two champions Accrington Stanley two weeks later before being offered his first professional contract.

Academically, Joe has passed his framework and achieved D*D, which exceeds his DD target.

Regional Officer Roger Gibbins said: “Joe is really good guy who has displayed a great work ethic and never causes any problems. I’m delighted he has progressed into the first-team and been given the chance to continue his development at Swindon.”

Ryan’s commitment to the two-year apprenticeship was rewarded at the end of this season as he received Wolves’ Academy Scholar of the Year award having excelled as a player and student.

“It was amazing to collect the award, I think I have come a long way,” said the 18-year-old. “I have been through a lot over the years, especially with injuries, and I think to come out with the award has put the icing on the cake for me.”

The winger won LFE’s Goal of the Month competition in October 2016 thanks to a stunning solo run and finish against Manchester United and has gone from strength to strength, appearing more than any other Wolves apprentice for the Under-18s this term.

Ryan gained a professional contract to remain at the Premier League-bound club and is fresh from his first experience of senior football after enjoying a successful loan spell at Telford United.