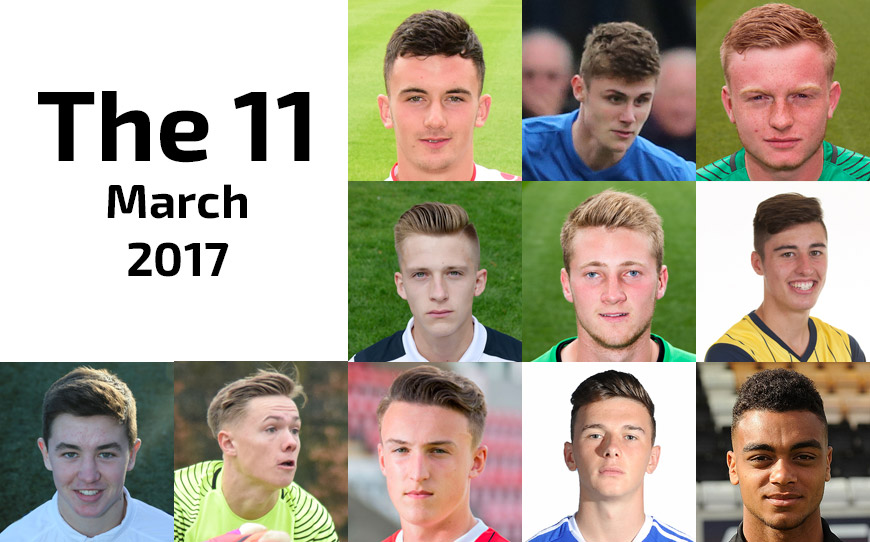 LFE takes a closer look at the players to make ‘The 11’ in March 2017 and why they’ve been included:

Jake is enjoying a whirlwind campaign at the Macron Stadium. Wanderers’ 17-year-old goalkeeper had already become a regular fixture in the club’s Under-18 and Under-21 sides before being thrust into the first team squad as cover earlier in the season.

He has also gained international recognition with England’s Under-18 team – which is quite a feat considering he operated as a striker until just three years ago.

“To achieve what I have in just three years as a goalkeeper, it’s what I’ve always dreamt of,” he recently told the club’s website.

“I just work hard in training and thankfully it’s paid off. It was unreal [to get the England call-up]. To pull on the jersey and to make my debut was the best feeling ever.”

LFE regional officer, Craig Skinner, added: “Jake is held in high regard by all the club and college staff that work with him on a daily basis. He has a great attitude and will do well on and off the pitch if he continues in the same vein.”

Leon continues to impress in the classroom as well as on the pitch. Currently studying the BTEC Level 3 Extended Diploma, he looks on course to sweep the board with distinctions in every unit of his work.

Leon, who made his first team debut for the U’s last August, in their Checkatrade Trophy victory at Shrewsbury, celebrated his 17th birthday in November by signing a 3-year professional deal at the Abbey Stadium and has made five appearances in League Two since the turn of the year

Mark turned 17 at the end of last year and then enjoyed a wonderful start to the New Year, penning his first professional deal and coming off the bench to make his first team bow in the Bluebirds FA Cup Third Round clash against Fulham.

With the versatility to play as a forward or in an advanced midfield role it seems only a matter of time until a full debut follows.Former Cardiff star and current LFE regional officer, Roger Gibbins added; “Mark is a very sensible and intelligent lad, who realises the importance of education to complement his footballing ability. He is currently on target to complete the ASE framework and achieve a triple award with his BTEC diploma in sport. He thoroughly deserves to be in ‘The 11’.”

Derby defender Joe appears to be on track on and off the pitch. Now featuring regularly for the Rams Under-23 side he is also maintaining strong progress in the classroom, where he is well on his way to attaining triple distinctions in his BTEC Extended Diploma.

Ian King, LFE’s man in the East Midlands said: “Joe is performing strongly at the moment which is testament to the excellent application he has shown throughout his apprenticeship.

The emergence of 17-year-old full-back Kenton, has been one of the highlights at the Northern Gas & Power Stadium this term. Richardson who has now made eight appearances for the Pools has impressed manager Dave Jones with his ability to “step up to the plate”.

“If he keeps listening and learning and getting stronger, then this club have a really good young left-back on their hands,” Jones recently remarked of the youngster, who is also on course to achieve a triple distinction on his BTEC Extended Diploma at East Durham College.

Midfielder Callum may only be a first year apprentice but he has already made an impression on the club’s Under-23 team. Marked out by his conscientious and dedicated approach the Republic of Ireland youth international has every chance of a bright future in the game and acts as a role model within the group.

LFE’s Paul Bartlett added: “Callum’s performances on the pitch have been excellent but he is also an incredibly driven and professional individual both during training and school.

“He is studying the BTEC Extended diploma and has consistently produced an exceptional standard of work, achieving high grades. He’s displayed leadership qualities, attending meetings on behalf of his peers with club staff and is a diligent and popular member of the squad.”

Teenage striker Luke made his Shrimps debut in January and made an instant impression by playing a huge part in the Shrimps’ final goal of a 4-1 win over Notts County.

With County chasing the game, Jordan led a sharp counter attack and saw a shot pushed onto the woodwork before Kevin Ellison swept home the rebound. “Luke has pace, and if you’ve got pace in forward positions, then anything can happen,” said Morecambe boss Jim Bentley. “What a fantastic debut for the young kid; that goal just wrapped it up perfectly.”

LFE’s Craig Skinner added: “Luke has made several first team appearances since his debut and is also working towards gaining triple distinctions on his BTEC. The future looks bright.”

Central defender Canice made his debut for the first team as a late substitute in the FA Cup second round replay against Macclesfield Town and has been involved in the match-day squad on several occasions since.

He also recent represented The Republic of Ireland U19’s Portugal and Norway and is well on course to pass all elements of his apprenticeship framework.

Keeper Callum was the hero in Preston’s penalty shoot-out victory over Everton in the FA Youth Cup in January and has also made good progress academically.

He looks sets to complete his apprenticeship, attaining all his qualifications and will hope to have done enough to convince Simon Grayson that he is worthy of a professional deal this summer. LFE’s Simon Williams, said: “Callum is a well-rounded individual who takes his infectious character with him everywhere he goes.

“He is self-aware and has kept his eye on the ball both in terms of football and academically. He has had a very positive period, most notably in Preston’s FA Youth Cup run.”

Goalkeeper Nathan has been outstanding in every area of his apprenticeship. He has consistently achieved distinctions in his BTEC work at South Essex College where he is taking the Extended diploma, is on target with his NVQ and has impressed everyone with his maturity.

First year apprentice Nathan has also been earning rave reviews for his performances for Shrimpers Under-18 side, which prompted Tottenham Hotspur to ask if he would be allowed to join them on trial.

Second year apprentice Leo is rewarding the faith of boss Dean Keates, who threw him into National League action last October. He has now made 14 appearances for the club and signed Professional terms last month at the Racecourse Ground: “I’m over the moon,” he said. “I’ve always dreamed of being a professional footballer and hopefully now I can kick-on again now and impress more people.”

Away from the pitch he is on target to complete his apprenticeship framework and has balanced his first team and academic commitments superbly well.