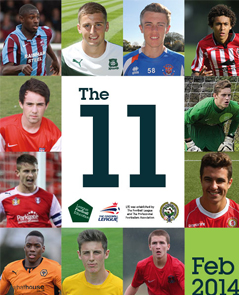 They’ve beaten off competition from around 1300 of their peers across the land so here’s an in depth look at who made LFE’s XI for February 2014 and why they made it.

Blackpool midfielder whose name came to prominence in January, when alongside fellow Under 18’s team-mate Henry Cameron, he was asked to appear on the Seasiders bench for their Championship fixture against Middlesbrough despite playing for youth-team earlier that day.

While that was clearly an emergency measure – the reality is that Mark has trained with the first-team squad for most of the current campaign and is highly thought of at Bloomfield Road.

“He’s a stand-out for me”, said Craig Skinner who monitors Mark’s education for LFE.

“He’s done well all year and it wouldn’t surprise me to see him make his debut before the end of this season.”

Fraser looks likely to become another to roll off the Alex production line and has shown himself to be a super all-rounder with his approach to his football, college work and general demeanour.

A consistent performer for the club’s Under 18 side, the forward has shown he can make key contributions at both ends of the pitch due to his prowess at set-pieces.

His ability in this area has seen him turn-out for the Under 21/Development squad on a regular basis while he has also caught the eye of the Scotland coaching staff at international get-togethers.

“Fraser is a great lad to have around,” said Crewe’s education officer Dave Whiteside.

“He’s a role model for the other lads and is always happy to help out or go the extra mile like he did recently by visiting children at a local school (Shavington Primary School) and talking to them about his experiences as an apprentice footballer.”

Sam has impressed on and off the pitch this period, earning a place on the bench for the promotion-chasing O’s over the festive period just days after his 17th birthday with a series of excellent displays for the youth-team, including during a devastating penalty shoot-out defeat in the FA Youth Cup to Stoke.

The youngster has also dealt maturely with the issue of his father, former Orient and Torquay manager Martin Ling, speaking publically about the mental health illness that saw him leave his post as Torquay manager last term.

The right-back from Broxbourne has been with Orient since the Under-10s and is now setting high standards in the Under-18s.

The youngster is also showing up well on his BTEC work at Rushcroft School in Chingford, “Sam gets on with everything that is asked of him without any hassle,” said course leader Dan Robson.

“He is thorough and produces the work to the standard expected of him.”

U’s forward James Roberts takes his place in the XI after impressing in both youth and U21 development teams. Having already passed his coaching qualification and completed his NVQ the Aylesbury lad is now closing in on a triple distinction on his BTEC.

“I can’t think of anyone more worthy for this accolade” said LFE’s Ian Smithson.

“James is developing really well across all areas.”

With over a dozen first-team appearances to his name full-back Ben can’t quite believe his rapid elevation to the Argyle starting XI even if Roger Gibbins is tipping him to be a star of the future.

The young full-back who signed his first professional deal last May and is the nephew of England rugby legend and 2003 World Cup winner Richard Hill, has attracted rave reviews for his composed displays since making his debut on Boxing Day.

“He’s flying”, said Gibbins who made around 600 appearances in a 20-year professional career.

“Ben’s a very level headed lad who will have a successful career in the game as long as he continues to show the attitude and desire he has shown so far.

“The pleasing aspect for me is that he, to his credit, made it clear that he wanted to continue his academic work at full pace, regardless of his football going so well.”

“He’s already passed his coaching qualification and finished his NVQ and is well on course to achieve Merit grades on his BTEC.”

“Harley’s fortunes have been transformed this year which is why he’s my pick,” said former Everton and Derby full-back John Barton.

“He’s benefitted from regular football in the youth and reserve teams and is the skipper of the Under 18s side.

“He was in and out of the team last year but he possesses excellent personal qualities and strong leadership skills and has a real determination to succeed.” added Barton who confirmed that the youngster will achieve all aspects of his apprenticeship framework.

He’s already the youngest player to ever make an appearance in Scunthorpe’s first-team and now the 17-year-old winger features in LFE’s 11 after making real progress this term.

The youngster who penned a new 18 month contract in January which has the option of a further one year stay at Glanford Park, has made 19 appearances this term scoring twice as the Iron push for a return to League One.

While rumours of Premier League suitors would turn the head of most teenagers Hakeeb maintained his work-rate off the pitch completing his education work and developed himself into somewhat of a role model for the club’s younger age players by helping out at the Academy in a coaching capacity.

“My nomination has to be Dominic” said LFE regional officer Paul Bartlett when asked to select an apprentice from his region to be included in ‘The 11’.

“He’s been around the first-team squad and is making fantastic progress in all areas of the apprenticeship,” said Bartlett in a glowing appraisal of the Blades midfielder.

“He’s heavily involved in the community initiative going on at the club and has been a great ambassador for them. His college teachers and coaches have nothing but praise for him and from my perspective he’s been a pleasure to work with,” added Bartlett.

With Southend manager Phil Brown tipping Ted for the top – the England Under 18 goalkeeper who was also a nominated for the League Two apprentice of the Year Award was an easy choice for ‘The 11’.

“From the first day I arrived at Southend United, a young man called Ted Smith has done nothing but impress me with his attitude and also his quality,” Brown said.

“His opening words to me, a total stranger on the day, were; ”Gaffer, my name is Ted Smith, I’m captain of the youth team….any problems with the lads just come and see me!

“What an opening line which completely sums up the lad and also will be the main reason for him to play football at the highest level,” Brown added.

LFE’s Darren Bloodworth has also been impressed by the young keeper.

“Ted’s success doesn’t surprise me at all,” said Bloodworth who first met the youngster nearly two years ago.

“From day one he has excelled in all elements of the apprenticeship and off the pitch he’s completed education not only ahead of schedule but beyond his projected target grades.”

While he is yet to make a first-team appearance, Ibrahim Keita is being touted as the next big thing to emerge from the club’s Academy.

The 18-year-old has been in red hot form this season with head coach Kenny Jackett insisting that at that level he is virtually impossible to stop.

“At Under-18 level his goal-scoring record has been terrific and we hope it continues,” Jackett said.

“I’ve taken him on a few trips with the first-team just to get out on the pitch for the warm-up and get that type of experience which helps.

The French forward who was on the bench for Wanderers 3-0 win over Brentford last month was picked-up from Saint Marcel three years ago and has impressed LFE’s Claire Wilberforce-Marsh with his efforts away from the pitch.

“He’s an excellent role model as he his extremely hard working and dedicated to everything he does,” Wilberforce-March said.

“He’s already completed all of his education programme which is remarkable as English is his second language,” she added.

A technically gifted midfielder who spent his formative years playing in Spain before his family elected to move back to the UK.

Big things are expected of the youngster who has been handed an 18 month professional deal and who made his first-team bow during last October’s 3-0 defeat to Rotherham in the Johnstone’s Paint Trophy.

“Cameron’s very good on the ball and was attached to a club in Spain before signing for York”, said former Minstermen star Pat Lally, who divides his time between heading up the education department at The Professional Footballers’ Association and working as a regional officer for LFE.

“He is a great lad and has a fantastic attitude towards all he undertakes. He’s already completed his NVQ and Level 2 coaching qualification and is on target to achieve a triple distinction on his BTEC.

“Cameron actually lives in Halifax and has commuted to York on a daily basis which hasn’t been easy while he’s an apprentice but you never hear a grumble from him, he’s very mature.”