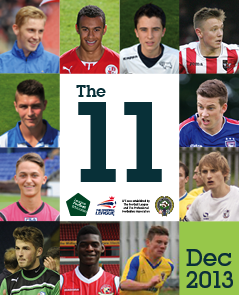 ‘The 11’ has been selected from a cohort of 1300 apprentice players across the land. So here’s an in depth look at who’s in our pick for December and why they made it.

Bantams striker McBurnie has excelled in the first half of this season. The 17-year-old with an eye for goal has helped the club to the top of the North East Youth Alliance and has already signed a professional deal at Valley Parade. McBurnie is also progressing in the classroom and looks set to complete all aspects of his education programme by early 2014.

Second year apprentice Richefond has made huge strides this year on and off the pitch.
He has been exemplary in his behaviour and attitude, tackling the Extended Diploma units in his BTEC, in which he is heading for DDD while his youth-team performances have earned him games for the reserves. He now trains regularly with the Red Devils’ first team. “Ryan is a model apprentice,” said youth coach Mark Beard, “He’s been outstanding on and off the pitch.”

Crawley’s education and welfare officer, Wayne Potbury, who teaches BTEC and NVQ to Ryan, added: “Ryan is one of the best apprentices I have taught.”

Right full-back Dryden has made a superb start to life as a full-time apprentice at Pride Park. The youngster who joined the Rams as a 13-year-old from local rivals Nottingham Forest was recently invited to attend Scotland youth training camps and his quality is also shining through away from the pitch working to Distinction level on his BTEC Extended Diploma. Dryden is also producing quality accounts of the life of an apprentice by chronicling his time at the club as an LFE Blogger.

Exeter playmaker Jay, made his full league debut in November, playing almost an hour of their 2-0 defeat against Phil Brown’s much fancied Southend team. Since then he’s found the time to pop back to his old school to make presentations to pupils and is achieving Distinction grades on his BTEC qualification. “He’s very well mannered, hard working and a conscientious young man who has made great strides this year,” LFE’s Roger Gibbins said.

Walker made his Pools debut in an opening day defeat at Rochdale and hasn’t looked back since. Now a second year apprentice he’s already made over 15 first-team appearances, signed professional terms and was recently called-up by England at Under-18 level. “Brad has had a heavy schedule because he’s so involved with the first-team but he’s worked tremendously hard to continue his academic work and is well on target to complete,” said LFE’s Paul Urwin.

The Tractor Boys Under 18 captain’s development has extended to playing his way into the Under-21s and recently scoring 3 goals in 3 games from left-back. Those performances were complimented by Gerard Nash (Coach) and Bryan Klug (Academy manager) while LFE regional officer Darren Bloodworth added: “He’s a great all-rounder whose commitment to Football Club and his apprenticeship has not wavered.”

Jordan Bove confessed his surprise when he was drafted into the Latics squad for their FA Cup defeat at Wolves in November though after starting the season with 14 goals in 12 games, perhaps he shouldn’t have been. Not even a red card four minutes into his first-team debut during the same month can diminish his achievements so far. Academy Manager Tony Philliskirk said: “Jordan has had a great season so far, he works hard, has a fantastic attitude and always wants to win.”

Valiants youth-team skipper Smith has already featured in the club’s second string and is an exemplary figure around Vale Park. The 17-year-old central defender has been with the club 5 years and is hoping to earn a professional deal later this term.

Sheffield Wednesday goalkeeper Joe Wildsmith put pen to paper on a two-and-a-half-year professional deal last month and is going from strength to strength on all aspects of his apprenticeship.
“I couldn’t be happier. I want to carry on learning and I will do that working with the likes of Chris Kirkland. Damian Martinez from Arsenal has already been a big help to me,” Wildsmith said. The youngster has also voluntarily coached the Owls younger Academy keepers and helped in a nursing home as a part of a club community project in recent times.

Raw talent Amadou Bakayoko admitted his ‘pride’ after signing his first professional contract earlier this month. In the process when he became the first of the current crop of Saddlers youth-teamers to be handed a deal for 2014-15. The second year apprentice has been prolific at youth and reserve team level and has made a big impact at the Banks’s Stadium.

“I came into the youth team late, but there has been a massive difference in me both as a player and as a person since I have been here. I know the hard work is only just starting and I’m looking forward to the challenge and I intend to keep working hard and to make the most of my opportunity,” he said.

A regular in the Under-21 Development squad, youth-team captain Dan Pearse is earning plaudits on and off the pitch: “Dan has coped well with the demands of Under-21 football,” said club education officer David Walsh. “He’s been in and around first-team players and been learning from them which can only bode well. While Pearse is relishing the Dons new set-up at Under-21 level and hoping it propels him towards the senior squad he is also putting a shift in away from the pitch: “His attitude towards his education and the college staff is very professional. He will do really well if he keeps taking a proactive approach to his work,” said College tutor Jose Higuita.