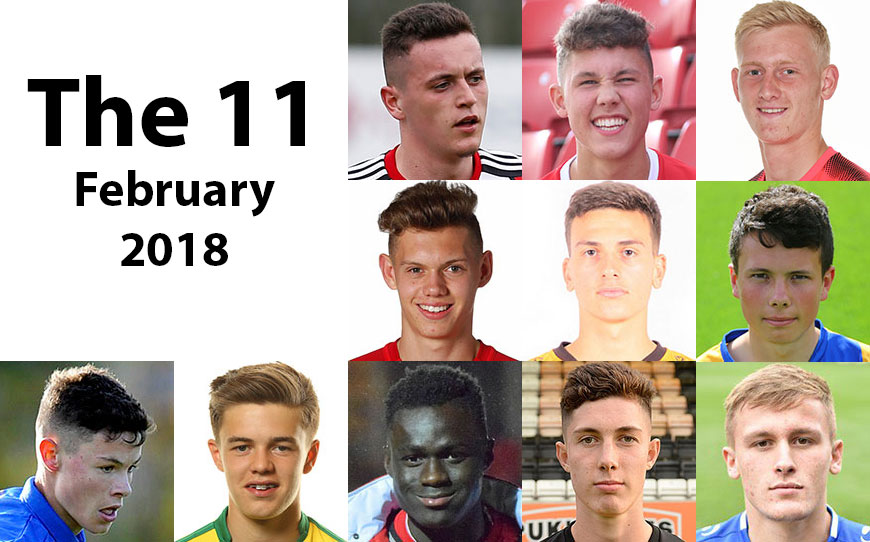 LFE takes a closer look at the players to make ‘The 11’ in February 2018 and why they’ve been included:

Roy has enjoyed a strong winter period, developing into a leader in Barnet’s Under-18 team, playing regularly for the Under-21s and earning a call-up for Albania Under-18s, while also being rewarded with a long-term professional contract by Director of Football Mark McGhee.

The second-year apprentice has made significant strides in the classroom, too, remaining on course to achieve high grades in the BTEC Extended Diploma, as well as completing his NVQ and FA Coaching award.

“Roy is an excellent, independent learner with a strong work ethic,” Lucy Morcombe, BTEC Tutor at Canons High School, told LFE. “Roy has progressed very well over the course of the season. He provides role model attributes that other players should look up to.

“He has earned his contract through his professionalism as a scholar and work ethic, which has shown in his performances on the pitch.”

Central midfielder Matthew signed a professional deal in October after producing some impressive showings for the Under-23s throughout the season.

Although he is yet to make his senior bow, the 18-year-old was an unused substitute for an away trip to Sky Bet Championship promotion hopefuls Aston Villa.

This success has not restricted his commitment to his academic work, however, with Matthew attending additional education sessions to keep up to speed with college work and is on track to complete all elements of the programme.

Sam is a high achiever in the classroom having already finalised his Extended Diploma and attained Distinction grades across all of his units, setting him up for a triple distinction star grade overall (D*D*D*).

Since completing his BTEC, the 17-year-old asked to conduct volunteer work with the Cambridge United charitable trust, working with them on a mental health and well-being program that is being delivered in schools local to the club.

He has also performed to a high standard on the pitch, making himself available for 119 out of 120 training days as he continues to push himself physically in the gym, while improving technically and tactically.

Cambridge PDP lead coach Tom Pell said: “Sam is a mature and very capable student and always completes tasks diligently. He is a role model to his peers and a pleasure to have in the classroom.

“He shows an excellent work ethic and is able to work independently as well as part of the team. He is self-motivated to get on with his work and easily achieves the higher grades.”

England youth international Ryan has experienced a wealth of exciting opportunities during his apprenticeship at club and international level.

The teenage goalkeeper made four appearances for England Under-20s as they triumphed in the prestigious Toulon Tournament last summer, making a vital save during a penalty shootout in the final against Ivory Coast.

The 18-year-old has been advanced into David Wagner’s first-team squad this season and has spent successful loan spells at AFC Telford and FC United of Manchester, where he won the Manchester Premier Cup.

“Ryan has done very well this season as part of the first-team squad at Huddersfield,” LFE Regional Officer Pat Lally said. “In the classroom, he continues to work towards the completion of his BTEC in Sport and aims to secure good grades before entering the final year of his current professional contract.”

Defender Toby has spent most of the last review period gaining experience of men’s football, appearing 17 times for Isthmian League North club Heybridge Swifts, including a number of outings during their impressive FA Trophy run.

During this time, he has continued to excel in the academic side of his apprenticeship and has matured into a leader among the Orient apprentices.

Rushcroft Foundation School BTEC Tutor Sam Reed said: “Toby is an outstanding scholar whose attendance and punctuality are exemplary, along with his attitude, work ethic and respect for his peers.

Orient Academy manager Lewis Spencer added: “Toby is an absolute pleasure to work with. He is focused and hungry and applies himself fully to all aspects of his apprenticeship.”

Harry has enjoyed a successful time as a player and student during his apprenticeship, clinching high grades in addition to establishing himself as a key member of the Stags Under-18s side that won the EFL Youth Alliance North East division in 2016-17.

The team currently top the table this season, too, with the central midfielder providing a number of goals and assists, while also shielding the defence to contribute to the best defensive record in the league for the past two years.

Elsewhere, the second-year apprentice has earned top marks academically and is even studying an additional A-level alongside the rest of his education.

Regional Officer Ian King said: “Harry’s attitude to training, games and education is outstanding and he manages to do an additional A-level alongside it all.

“He is a D*D*D* student and sets an example to the others in terms of how to manage your time effectively in order to succeed in all aspects of the apprenticeship.”

Striker Momodou has been training with the first-team after an impressive first year of his apprenticeship, scoring with regularity to steer the Young Exiles to the EFL Youth Alliance Southern Merit League One title.

His keen eye for goal encouraged manager Michael Flynn to introduce him to the senior fold during pre-season before sending him out on loan to gain experience at Merthyr Town.

The 18-year-old has also received international recognition, being capped five times for Wales Under-19s, including a memorable debut as he scored in a 4-3 win against Switzerland.

Regional Officer Roger Gibbins said: “Modou has been in the first-team squad and recently spent 10 days on work experience training with Leicester City, which shows his tremendous progress on the pitch.

“He has also been working really well with his education and is currently working above his target grade. His attitude is great and it’s fantastic to see that he has remained really focused on the whole programme.”

Second-year apprentice Alfie has excelled in the classroom throughout his apprenticeship, finishing his BTEC (securing D*D* grades) and passing his NVQ course just after Christmas.

In addition to this, Alfie will complete an online A-Level in Maths in June and has recorded A grades in the modules he has taken so far.

His off-field success has carried over onto the pitch, displaying his excellent leadership qualities by captaining the Under-18 team, while he has also been involved with the Under-23 side on several occasions. Alfie’s incredible work rate and commitment to the apprenticeship has been rewarded by the club with the offer of a professional contract.

Oldham Under-18s captain Tom forced his way into the first-team reckoning in January after producing a catalogue of dogged displays in defence.

The 18-year-old full-back was handed his senior debut in a 4-2 Checkatrade Trophy victory over Leicester City Under-23s, where he was named man of the match. Another start in the competition followed a month later as the Latics bowed out at the quarter-final stage to Shrewsbury Town.

Manager Richie Wellens recently told the Manchester Evening News: “Once we took him away from the youth team and stepped him up with better players, you could see straight away that he was definitely ready as he can play and will have a fantastic career.”

Tom has retained his focus at college as well and is on track to attain Distinctions across the board on his Extended Diploma.

David made a huge impression during the first year of his apprenticeship, with his stellar performances catching the eye of his nation’s selectors, scoring and winning a penalty on his Northern Ireland Under-21 debut in a EURO 2019 qualifier against Estonia despite being only 17.

He also played the full 90 minutes of the National Play-Off final victory over Coventry City as United’s Under-18 side added the national crown to their Professional Development League North title.

The teenage striker has progressed into the Blades’ Under-23 team and featured regularly this season. His success has not hampered his progress in the classroom either, staying on course to fulfil his Extended Diploma.

Regional Officer Paul Bartlett said: “David continues to impress both on and off the pitch. His dedication to becoming a better player is unquestioned and he has remained focused on all areas of his apprenticeship.

“He has continued to manage his learning despite his international duties and is on track to gaining the Extended Diploma BTEC qualification.”

Midfielder Alex is making tremendous progress both academically and as a player. The 17-year-old is on track to achieve D*D*D* on the Extended Diploma and has completed his NVQ.

Second-year apprentice Alex, who signed an early professional deal at the start of February, was a key contributor to a run of five wins on the bounce to begin 2018 for the Under-18s, lifting them up to fourth in the Professional Development League North, while he has taken his role as captain into the community by recently arranging a charity event.

Head of Education & Welfare Dan Potts said: “Alex has shown an excellent attitude and application to all his education and FA Coaching classes. He is a leader in class as well as on the pitch.

“As captain of the youth team, he also organised the group to take part in a Cash4Kids charity bag packing day during the Christmas period, where they raised close to £500 in an afternoon.”