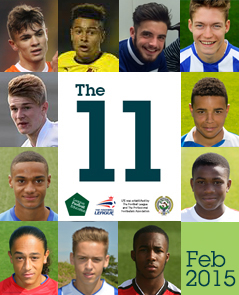 Here’s an in depth look at who made LFE’s XI for February 2015 and why they’ve been included:

Daniel has had a tremendous period, having captained the youth team, become a regular starter for the Under-21s and earning a professional contract for next season.

Despite being just 17, the central midfielder has impressed second-team coach Alan Reeves and first-team boss Neil Ardley with his tenacious and mature displays against more experienced opposition from higher divisions in the Football League, the two former Wimbledon team-mates from their Premier League days, rewarding him with a deal to keep him at Kingsmeadow.

At the same time, Daniel has been an ideal apprentice, working extremely hard to fulfill his potential at South Thames College, where tutors Deb Carey and Sandro Sandri have been impressed by his attitude and the level of work produced. He is on target to easily surpass his predicted grade in his Btec Diploma and has completed his NVQ.

Kieran Dunbar received a feather in his cap for scoring the winner in the Blues 3-2 victory at Liverpool in the FA Youth Cup last month and was John Barton’s pick this time around.

“He’s pretty much completed everything on the framework at distinction level and he’s a really level headed lad who applies himself to everything he does with equal measure,” Barton said.

Dominic Telford was Craig Skinner’s stand-out choice for The 11.

“It’s been a rollercoaster couple of years with Dom,” Skinner said, “Things have really taken off for him in the last 2-3 months especially since he grabbed a goal against Rotherham in the Championship over the festive period.”

While the 18-year-old is yet to sign a professional deal with Blackpool, he was a regular contender in LFE’s Goal of the Month competition earlier this term made his first-team debut as a late substitute in the opening day defeat to Nottingham Forest. Telford is also rumoured to be the target of several Premier League clubs.

Son of former Nottingham Forest and Watford full-back Des, Tyler, is a first-year apprentice who is has become a regular in the Rovers Under-21 team and at first-team training.

A big future is predicted for the youngster with LFE’s Roger Gibbins adding, “He’s shown a great attitude all round, he’s doing the Extended Diploma and appears to have caught the eye of the club’s coaching staff with his desire to make it in the game.”

Skilful winger Ademola was playing Sunday League football last season and was only spotted by Charlton when he starred in a friendly for London FA against the Addicks youth team at the end of the season. Charlton signed him up last summer and the boy from Camberwell has made a huge impression.

Despite being slight in stature, Ademola, who went to St Thomas the Apostle College in Peckham, has tormented opponents up and down the country with his quick footwork and lethal shooting. He has already had four Goal of the Month nominations, including one this month!

Described as ‘a friendly and charming young man’ by regional officer Gavin Willacy, Ademola is continuing his excellent academic record from school and is getting high grades on his Btec Extended Diploma at Bromley College.

Made his Daggers debut as a late substitute in the 0-0 League Two stalemate with Pompey earlier this month and has been tipped for a bright future by assistant manager Warren Hackett who believes the 17-year-old will grasp any opportunity that comes his way.

Hackett said: “Jodi is 17-years-old and he is on the bench for the first-team. He will get his time and he will be ready when he does get his time.”

“I would never say it was too early for anybody. You get the likes of Wayne Rooney, Michael Owen and those sort of players have played at 16-years-old. At the time people probably would have said are they ready? But they got an opportunity. At the end of the day if the boy gets an opportunity – trust me, he will take it.”

Jones’ progress has not been confined to the pitch, the young forward has also made headway academically after a mixed start to his apprenticeship.

“Despite his breakthrough into the first-team squad his attendance at lessons has remained 100 per cent. He has increased the amount of time that he has given to his studies, attending an additional session on a Friday afternoon to ensure that deadlines for his work are met,” LFE’s Darren Bloodworth said.

“He has been conscientious in his studies, seeking to enhance his knowledge through research and by contributing to learning sessions with additional discussion points. He has worked well in class both individually, and when working as part of a group, showing clear creative thinking and impressive leadership skills,” Bloodworth added.

A first year apprentice, Jacob recently signed a professional deal with the club and has featured a number of times in the first team and U21 development squad this season. Described by the club as a ‘very versatile footballer with fantastic pace’ Jacob ‘s progress since the start of his apprenticeship has not gone unnoticed.

Nominated for The 11 by regional officer Pat Lally, Jacob has impressed on the pitch and his work ethic and commitment to the programme have been excellent. His tutors supported the nomination saying: “Jacob is a well-mannered polite young man who works hard to achieve the higher grades. He is always engaged and interested in the topics and understands the relevance to his playing career.”

Boro Academy prospect Hayden Coulson makes The 11 after impressing on and off the pitch. The youngster who famously missed his original GCSE exam in English to play for England against Northern Ireland while still a schoolboy is performing very well in all areas of his education programme with tutors lauding his ‘excellent attitude and approach.’

Speaking about the England Under-17 left-back, Middlesbrough’s Barry Dawson told LFE, “Hayden has a fantastic attitude to work, personal development and a great attitude in helping others.”

Described as ‘one of the family’ by the people he lodges with, Spencer has more than acclimatised in Sheffield since moving up from Leicester.

A regular for the Under-18s the young defender, who is still a first-year apprentice has not looked out of place ion several outings for the Owl’s Under-21 side.

Academically he has shown an excellent attitude in the classroom after electing to take-on the BTEC Extended Diploma and regional officer Paul Bartlett said, “Spencer has been excellent on the education programme from day one. He has already completed several Extended Diploma units to a high standard. He has also approached all other educational tasks with the same enthusiasm and is showing great promise on the pitch.”

Kyle King has battled a serious knee injury this term and gets Claire Wilberforce-Marsh’s vote for The 11:

“Kyle is a very well-mannered young man who has overcome so much but keeps pushing himself to achieve more,” said Wilberforce-Marsh. “He is always positive about his recovery and excited about the future. He is a great young man that deserves this recognition because of his sheer determination to recover from his injury and his fantastic attitude through the rehabilitation.”

“He’s a great team player and motivator of others and he is a credit to himself and his club,” she added.

The Saddlers academy manager Neil Woods added: “Even though it must have been a very frustrating few months for Kyle he is always very positive and has a great attitude towards all he does. He has listened to all the advice regarding his rehabilitation and this, plus his attitude, has stood him in good stead during his recovery.”

“Kyle has come under the radar of members of the first-team and the manager and staff – this too is all positive and they like having him around.”

Watford’s Dennon Lewis receives Ian Smithson’s vote in the South-East. Lewis has enjoyed an excellent period of his apprenticeship.

The young forward has just established himself in the Under 21 team who reached the Quarter Finals of the Barclays Under-21 Premier League Cup and has trained regularly with the Hornet’s first-team. With 15 goals to his name this term, Lewis is also on course to achieve all aspects of the apprenticeship framework.

“Dennon is doing well in all aspects of his apprenticeship” said Watford’s Barry Quin. “Physically he is very robust while technically and tactically he demonstrates good knowledge and understanding.”