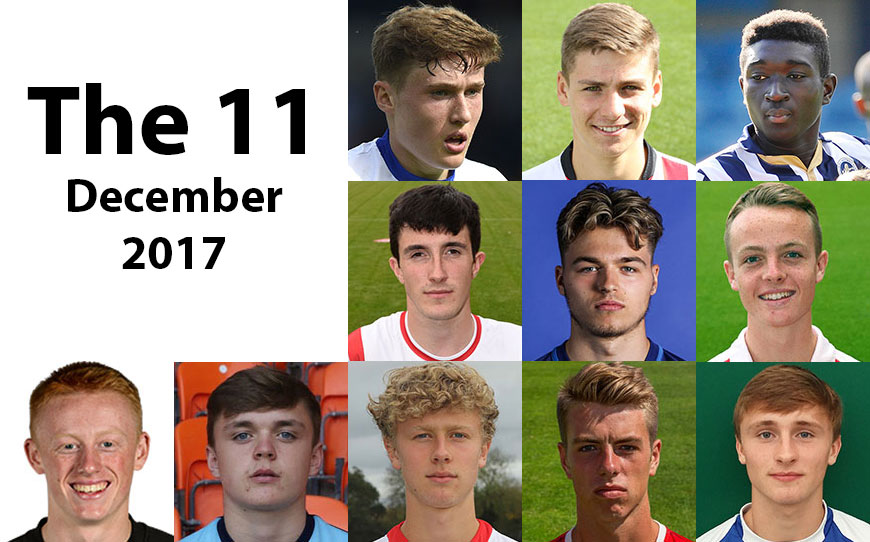 LFE takes a closer look at the players to make ‘The 11’ in December 2017 and why they’ve been included:

Second-year apprentice Finlay has enjoyed a prolific spell in front of goal in the Under-18s this season which has seen him earn first-team recognition.

The winger was handed his senior debut in the Checkatrade Trophy against Wigan Athletic in August and celebrated the occasion with a goal, netting an equaliser three minutes from time.

He then added another appearance to his tally in the competition against Accrington Stanley in October, while Fin has also made great strides with his education.

“Fin has surpassed his own expectations of himself in what he has achieved so far,” LFE Regional Officer Simon Williams said. “It has been special to witness his self-belief increase, particularly in the classroom where he has received support from his tutors leaving him way above his target grade.

“Fin has created strong relationships with those around him, from Viv Black at the college to his coaches at the football club, who all speak highly of him. I hope that Fin continues to grow in all areas and manages to build on his debut for the first-team.”

Callum rose to prominence in May 2016 when he became the first player born in the new millennium to make an appearance in the English Football League as a 75th-minute substitute against Southend United.

Since then, he has earned 16 outings in all competitions for the Shakers, including 14 starts and was handed his first professional contract in February to warn off reported interest from numerous Premier League clubs.

Off the pitch, the 17-year-old has remained on track with his college work despite spending most of his time with the first-team, while he is also an ambassador for UNICEF.

Striker George enjoyed a tremendous spell of scoring in the autumn months, taking his tally to 25 goals by the start of December, including an eight-goal haul in the FA Youth Cup first round against AFC Totton.

The 17-year-old made his senior debut in the Checkatrade Trophy against Swansea City Under-21s in August and recently penned his first professional contract, committing his future to the club until June 2020.

After signing his new deal, manager Gary Johnson said: “The fact that we have signed George for the next two and a half years shows he is ready now and will be in and around the first-team regularly.

“He will certainly get his league debut at some stage and at the right time for him and us.”

George is thriving in the classroom too and is currently completing his Extended Diploma to distinction standard, while he has also engaged in some community work with the first-team.

Second-year apprentice Joe was appointed Under-18s captain by his peers for the 2017-18 season and led the team to the third round of the FA Youth Cup, scoring in a 4-0 win against Evesham.

Joe has also made several appearances for the Under-23s, while making great advancements off the pitch, with the 18-year-old expected to achieve a triple distinction grade in his BTEC Extended Diploma, as well as making excellent progress with his NVQ.

Head of Education David Whiteside said: “Joe is an apprentice who gives everything his best shot, be that playing, training or in relation to his education. He is a dedicated, diligent boy who always wants to improve.”

Meanwhile, NVQ Tutor Matt Sinclair added: “His attitude and behaviour in sessions has been exemplary which has helped Joe make consistent progress. The level of detail in his submissions is always to a very high Level 3 standard and good understanding of each topic is evidenced in all of Joe’s work.”

Danny has shown exceptional resilience after overcoming a long-term injury that he suffered during his first year and has not only played regularly in the youth team, but was also called into the Northern Ireland Under-19 squad for their UEFA European Championship qualifiers in October.

The left-back played and scored in a narrow 2-1 defeat to Poland before making his second appearance in a 0-0 draw with Belarus. Danny has also played consistently in Donny’s Under-23 team and recently made his second first-team appearance, playing the full game in a Checkatrade Trophy victory over Scunthorpe.

This excellent period for the 17-year-old resulted in him being offered and signing his first professional contract, agreeing a deal until the summer of 2019.

“Danny has continued to balance his football and education very nicely,” Regional officer Paul Bartlett said. “He has worked hard to ensure he catches up on any BTEC work missed as a result of international duty. Danny has a positive and enthusiastic approach to all he takes on and is a great ambassador for the club.”

Jack has made great progress on and off the pitch this season. The defender made his Sky Bet League One debut as a half-time substitute in a televised game against Portsmouth in October before featuring in a 7-5 victory over Reading Under-21s in the Checkatrade Trophy a month later.

Academically, the 18-year-old is working at D*DD level in the Level 3 Extended Diploma and has completed his Level 2 coaching badge.

He has also started to participate in community work and recently represented the club on an overseas charity trip to Sri Lanka, where he coached several hundred school children over a 10-day period.

Jesse was encouraged to make the transition from striker to centre-back last summer and his hard work and dedication to the move has paid dividends after being named Under-18s captain, while also featuring in the Under-23 side.

His playing performances are only part of Jesse’s success story though, having consistently achieved distinctions in his BTEC at London South East Colleges and is on track to achieve a very high grade in the Extended Diploma. He is also completing his UCAS application with a view to doing a degree alongside his football.

“Jesse has been exemplary throughout his scholarship so far,” said Regional officer Gavin Willacy. “He sets a standard for the rest of the squad to follow, with a maturity and desire for success on and off the pitch that is infectious.

“Jesse should go far in life whatever happens in his football career, and that is a great reflection not only on him but also Millwall and the tutors at LSEC.”

Centre-back Tommy has been a major cog in the Dons side that currently holds a significant advantage at the top of the EFL Youth Alliance South East table and possesses the best defensive record in the division.

The second-year apprentice also helped his team book a place in the FA Youth Cup fourth round after netting an 87th-minute winner against Cardiff City.

Tommy has had to cope with living several hours away from home in digs in Bletchley, although he is used to change having moved from Cornwall to Plymouth and then Hampshire before joining the Dons for his apprenticeship.

That maturity has shone through every area of his apprenticeship as he excels on his BTEC Extended Diploma at MK College and is proactive in planning his future career options.

“Tommy is a fabulous example for other scholars, especially those who are taken way out of their comfort zone,” Regional officer Gavin Willacy said. “He has moved to another part of the country and joined a squad that has been together since primary school.

“He overcame that outsider feeling, worked extremely hard and showed tremendous maturity to make the most of his ability and opportunity. His football progress is now reflecting the positive place he is in off the field, too.”

Matthew made seven appearances in the Under-18s before he even started his apprenticeship and went on to have a productive first year, playing 26 times as well earning four Under-23 outings.

The midfielder has continued to perform this season as captain of the Under-18s, although it is his marked improvement off the pitch that has been particularly impressive to the club’s staff.

Head of Education Darren Darwent said: “Matty is now producing work to a Merit/Distinction level in his second year of his apprenticeship. The quality of his work is very impressive.

“Not only does he take pride in his assignments, but he works very independently and has honed his study skills. This is a lad who, at the beginning of his apprenticeship, could not work independently, to the point where we employed a support worker to sit alongside him and help to guide him through his work and assessments.

“The fact that he had a predicted grade of PP speaks volumes on his progression, where he can now confidently work towards achieving higher grades and was successful in passing his Maths Functional Skills.”

Sam started the second year of his apprenticeship by being involved with the first-team pre-season tour, taking part in every friendly fixture and was duly rewarded with a professional contract in October as he signed a three-year deal with the option of a further 12 months.

Although he is yet to make his competitive debut in the senior side, the centre-back has impressed on various loan spells this season.

“Sam is an excellent leader on and off the pitch and tries to do his best in everything he undertakes, not least his education,” Academy manager Nick Sheppard said. “Sam is only a couple of units away from completing his NVQ and is on course to receive the extended diploma in his BTEC.

“Due to his increasing profile, Sam has happily gone along to soccer schools for the Community department to meet the players and throws himself into the visits when he attends. He is extremely well-mannered and is an excellent ambassador for our football club.”

Midfielder Reece is thriving both on the pitch and in the classroom as he approaches the final quarter of his apprenticeship.

The 17-year-old made his first-team in the Checkatrade Trophy as a late substitute during Rotherham’s 3-0 win at Bradford City in November.

Reece has also gained international recognition by representing Northern Ireland Under-19s in their European Championship qualifiers against Poland, Germany and Belarus, starting all three games despite being a year below the age group.

And yet he has not let that success affect his education, with Reece staying on track to achieve grades of DDD on his BTEC Extended Diploma course.