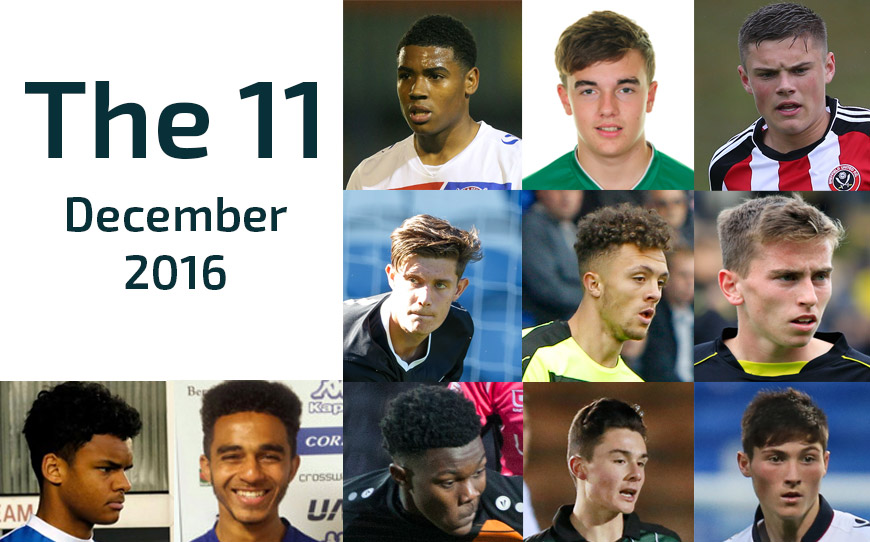 LFE takes a closer look at the players to make ‘The 11’ in December 2016 and why they’ve been included:

Forward Ephron broke into the Barnet first team squad over the last review period, making his debut in the last half hour of the 5-0 hammering by Norwich in the Checkatrade Trophy in October. Soon he was making his EFL debut and, by late November, was starting for Martin Allen’s side in the win over Notts County at The Hive.

During this period Ephron, who is from Peckham in south London, has moved from being a winger for the youth team to playing centre-forward for the Bees. A mature and calm student, he is also doing well in his BTEC studies at Canons High School, across the road from Barnet’s Hive headquarters, and is on track to pass the apprenticeship framework with flying colours.

Jack got 90 minutes in Bolton’s Checkatrade Trophy defeat against Everton in August and is being viewed as one for the future at the Macron Stadium. Off the pitch he’s progressing well on a BTEC Extended Diploma and is well on course to achieve all elements of his apprenticeship framework.

joe signed professional terms for the Brewers in October, a month after he had appeared on the substitute’s bench for Burton’s 1-0 defeat to Brighton in the Championship.

While he is yet to make his senior bow, manager Nigel Clough has gone on record to say that “he is not a million miles away from the first team,” and will be given an opportunity at some stage. Sbarra has starred for Albion’s developmental side this season and is also excelling off the pitch.

“Joe is studying the Extended Diploma at college and is a role model to the first year apprentices,” said LFE’s Ian King. “He’s a well-mannered lad, who is on track to do very well if he continues to work in the same manner as he has already shown.”

Seventeen-year-old midfielder Jacob, was being released by Leyton Orient this time last season but he has made great strides since moving to the North West. A first debut at 16 has led to him being linked to several Premier League clubs and Bury may struggle to hold on to the starlet beyond this season.

LFE regional officer Craig Skinner said: “Jacob has been flying this season and has not looked back since he got in the first team. He’s doing well at college on the Extended Diploma and has also taken on an A Level in History.”

Despite making his first team debut when the Daggers were 5-0 down at home to Gateshead in November, midfielder Hyde has flourished in the first team squad as D&R chase an immediate return to the EFL. Tyrique played 90 minutes in the FA Cup at Halifax and captained the youth team two days later when they lost 4-3 after extra-time in the FA Youth Cup at Luton.

“Being the youth team manager’s son brings pressures that Tyrique has managed superbly,” says his regional officer Gavin Willacy. “Ty has matured a lot this season and appreciates his leadership role in the group. Although he has been with the first team every week since getting called up, he is doing well with his BTEC Extended Diploma at Barking & Dagenham College and with his NVQ. He is setting a positive example to the younger players.”

Highly rated full-back Jordan makes ‘The 11’ after continuing his rise to prominence with Huddersfield.
Williams, who plays for Town’s Under 18s and Under 23s, has already represented England at U17 and U18 levels and received a glowing endorsement from Pat Lally.

Lally who doubles up as director of education at the PFA and an LFE regional officer said: “Jordan has been outstanding this season. He is a bright prospect and clearly has the potential to play first team football in the near future.

“He’s a diligent and hard-working young man who has impressed me with his attitude to football and education,” Lally said.

Matthew has embraced his apprenticeship at Leeds and shown maturity, dedication and passion. His professionalism in matches and training is replicated in the classroom where he communicates effectively and regularly with staff and often mentors and supports his team mates.

Producing outstanding work on his BTEC qualification and now featuring in the club’s Under-23 side, Downing who was the club’s apprentice of the year last term, appears on an upward trajectory.

Regan has earned the admiration of his peers and staff alike at Lincoln this term. Regularly training with the club’s high flying first team he has also willingly established himself as an important part of the academy goalkeeping coaching staff, volunteering his time in the evenings to work with the schoolboy goalkeepers.

Academy manager Damian Froggatt said: “Regan has shown an exceptional commitment to his apprenticeship and is a real role model for the younger players in the academy.

“He is selfless, passing on his technical knowledge and sharing his experience with the young goalkeepers but at the same time developing his social and leadership skills. At college he has been one of the most improved students in terms of attitude, application and effort and is applying himself well.”

Second year apprentice, Alex impressed manager Derek Adams enough to be handed a first team debut in December against Newport. The Under-18s striker hit four against Cheltenham in the FA Youth Cup and is regarded as one for the future at Home Park.

“He’d trained with the first team before making his debut and he’s bound to get another opportunity soon. Academically he is on course to achieve a triple distinction and has shown himself to be very capable and mature.”

LFE’s Ian Smithson gave Polish goalkeeper Brzozowski his nod of approval in the South. Smithson said: “Things are going really well for Marcin. He has been training with the first team and Under-32s and was called-up by Poland recently.

“He’s made a good start to his second year at college and his attitude to learning is excellent. He must be managing his time effectively between football and studies to maintain his current grades and remain on top of all assignments.

“At present he is forecast to achieve three distinction grades.”

He may only be a first year apprentice but Regan is captain of the Blades youth team and a regular in the club’s Under-23 side. He announced his arrival at senior level with a goal in the 4-2 Checkatrade Trophy win over Grimsby in November and in doing so became the Blades youngest ever scorer in the process, beating Simon Stainrod’s 31 year-old record by one day.