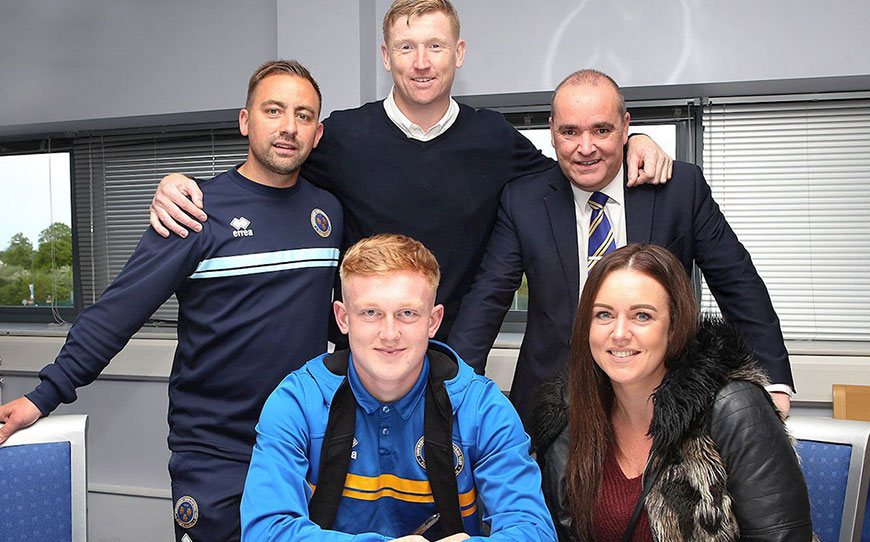 Shrewsbury Town have handed second-year apprentice Kian Taylor his first professional contract, following in the footsteps of Lifumpa Mwandwe, who signed in October.

Academy manager David Longwell told the club website: “Kian has done very well since I came in. I have only known the boys for a few months but he has been impressive. His attitude, work ethic and his performances have been good. After going through the process with the first-team staff, they feel he deserves another year.

“He deserves it, he’s a really good kid. It’s now up to him to go away in the summer and take the opportunity when he comes back. Kian is a centre-midfielder but he is an all-round player. He’s decent defensively, he’s quite disciplined and he can also get forward.

“He’s left-footed, which gives him a different dimension. He has good technique, so he ticks a number of boxes in that midfield area. He’s someone who is very dependable and very reliable in games. The players also rate him highly.”

Meanwhile, Jack Atkinson, Reece Corfield, Rhys Davies and Jack Leask have not been offered pro deals, but Longwell believes they can still forge careers in the game elsewhere.

“It’s always difficult when players are given disappointing news,” he said. “They can use that and kick on somewhere else. Not every player can come through the scholarship programme and get a deal or get into the first-team.

“All of the boys are good players and they will go into other things. They will get opportunities elsewhere – wherever that may be. Who knows what can happen. They are all still young and have potential. They might go elsewhere and flourish.

“I wish them all the best of luck. Their attitude, their commitment and they way they conduct themselves has been excellent. They’re all in a good place to go somewhere else and use what they have learnt here.”