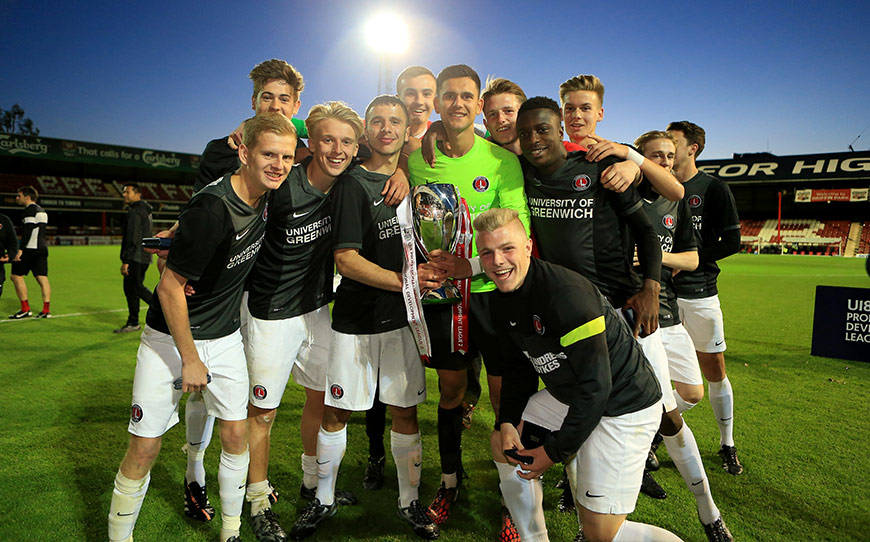 Charlton Athletic crowned a fine season by lifting the Professional Development League Category 2 national title earlier this week with a 1-0 win over Brentford at Griffin Park.

It was a case of third time lucky for the Addicks, who had won the southern division of the Cat 2 competition in each of the last three seasons but had fallen at the semi-final stages of the play-offs in the previous two years.

The only goal of the game came on six minutes when striker Josh Umerah, a dangerous physical presence all night, took a snap shot from a narrow angle, taking Bees keeper Nik Tzanev by surprise and beating him at his near post.

Charlton had other openings in the first half with Umerah, Brandon Hanlan and Ademola Lookman all breaking clear and having opportunities to score but they were thwarted by the top-knotted Tzanev, inaccurate shooting or poor final decisions. Brentford took a hold on the game and were perhaps unfortunate to not be level by half time, Courtney Senior skewering their best chance wide.

Hanlan had looked Charlton’s likeliest danger man but their midfield were unable to gain sufficient possession to supply him, as Brentford dominated after the break, James Ferry and Bradley Clayton controlling central midfield.

Charlton relied on keeper Dimitar Mitov to make several fine saves in an increasingly frantic half as a disappointing game burst into life with Brentford desperate for an equaliser. Chances came and went to Herson Alves and substitutes Courtney Austin, Chris Mepham and Josh Bohui during a frenetic climax, but Mitov and his defence stood strong and rode their luck.

It was a particularly special evening for Charlton centre back Sevdar Bokciu. Released by the club a few weeks ago, the 18 year old from Wood Green continued to train with Steve Avory and his squad, earning a place on the bench. A late withdrawal by Ken Yao saw Bokciu give a starting berth and also the captains armband.

Two hours later he was lifting the trophy at the end of his last game for the club to crown an amazing week in which he has been attempting to secure a scholarship in the USA via Pass4Soccer and LFEs assessment trials.