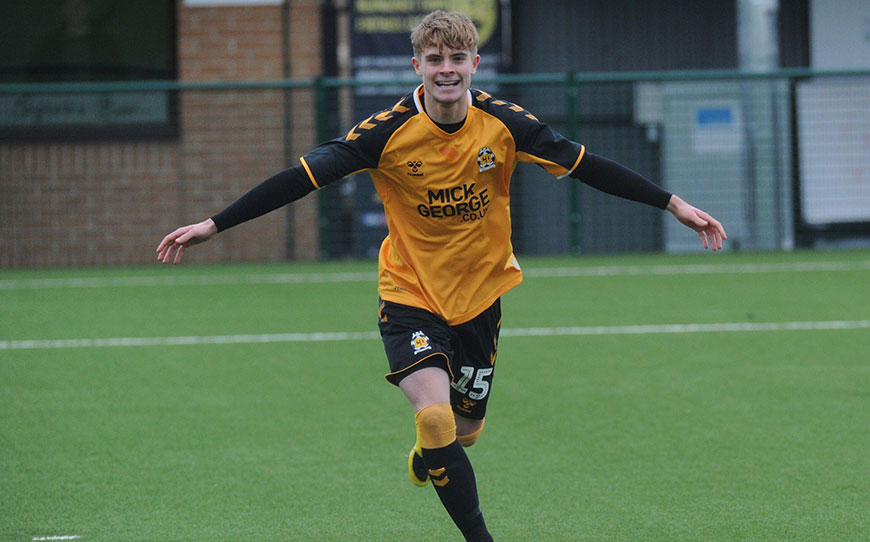 Significant efforts have been made in recent times to remove the stigma of vocalising mental health concerns in football and society as a whole.

Cambridge United apprentice Harvey Steel is an advocate of raising awareness, having been through his own struggles.

Following a 12-month period of suffering in silence, the 18-year-old sought help and has not looked back since.

He told LFE: “Heading into the apprenticeship, I was solely focused on making the best start possible and ended up growing apart from my school friends, so I didn’t really have an escape from football.

“While they were enjoying their summer holiday after GCSEs, I was always thinking about football and I couldn’t switch off. As the season progressed, I lost my place in the team, which wasn’t how I’d envisaged my apprenticeship going.

“I had to adapt and show some resilience, but I didn’t have the capability at the time. I found it very difficult and I didn’t speak to anyone or get help, so I started to feel alone and quite separate from my team-mates, family and friends.”

Steel’s struggles gradually built up before eventually leading to a handful of serious episodes, which finally motivated him to express his emotions in a conversation with his parents.

“I felt like a weight had been lifted off my shoulders,” he said. “After reaching out to them, my dad called The PFA and within a week I was put through for 12 weeks of counselling (provided by Sporting Chance Clinic). The PFA covered the costs as well, which was incredible.

“I’d go to the counsellor’s house once a week, sit down and talk about how I’d felt and things I’d encountered during that year of struggling. We talked about coping mechanisms, so how I can identify when I’m starting to feel down and then working out ways to address that.

“My parents also had a meeting with Tom Pell (Academy Manager) and Jimmy Unwin (PDP Lead Coach) and they were brilliant, too. They’ve been really supportive and allowed me to focus on getting back to a healthy mental state.

Getting help has really benefited my football as well because I started to build confidence in myself again and I had that belief and drive to go in to the club and work hard, which is what I’d lost when I was feeling low.”

Using his spare time on an interest away from football became a key focus point for Steel, who recognised sports journalism as an alternative career that he intends to pursue. Possessing a newfound confidence, the teenager contacted industry professionals to gain advice on his next steps.

“I had a few days off college after completing some pieces of work earlier than the deadline, so it gave me the chance to do some work experience with the media team at Cambridge,” said Steel. “During that time, it really confirmed that I do enjoy it and that encouraged me to look deeper into it.

“I direct messaged Jake Humphrey on Instagram and just asked for some advice on where to start and what to do and he was really helpful. He gave me some advice and I set up a blog and Twitter page and got that in motion.

“I went on Wix to create a free website and spent about a week or so setting that up. My dad helped me with the logo and slowly I’ve put it all together.

“I’m not really the most artistic lad, but I have enjoyed creating it. It’s given me the ability to focus on my football, but also have an open mind about what could be next. It’s helped me to grow and develop as a person.

“I spoke to Mark Roberts (LFE Personal Development Mentor) on LinkedIn, who used to be a player at Cambridge. He said he did a University course during the time that he captained Stevenage to back-to-back promotions, so that just emphasises that having other interests to focus on definitely isn’t going to hold you back or hamper your football.”

Steel has written numerous articles, including match reports and a regular series called ‘Loan Watch’, which tracks his Cambridge Under-18s team-mates, while he also documented his mental health experience in an honest and informative piece.

“The lads have all been really supportive and shared my content on social media,” he continued. “I think I’ve also been able to help them by giving them some publicity, because a few of them have done well on loan and by writing about their success, I’ve been able to get them some exposure.

“The aim of the mental health post was to normalise this topic while giving people a bit of advice, whether they’re current apprentices or preparing to start next season.

“We had a Life Skills workshop from If U Care Share at some point, which centred around mental health. Their aim is to remove the stigma of talking about your feelings and it was tough sitting in that because I hadn’t reached out for help at that time.

“That sort of session showed me that there is a massive support network available to anyone who’s struggling, and it encouraged me to then reveal my experience and show other people that they should feel comfortable about opening up. It’s something I didn’t do initially, but I’ve realised that talking is massively important.”

The young right-back was recently offered the role of Youth Team Mental Health Ambassador, which sees him attend various events and workshops with Cambridge’s Community Trust.

He said: “I’ve been involved in a mental health workshop with some elderly people and I attended a session with Darryl Coakley – the club’s Mental Health Officer. He runs a programme going into schools and talking about a range of subjects. I assisted him with his plan to familiarise younger kids with mental health.

“Cambridge have also started an initiative to help people with disabilities and connect them to the club, creating a close-knit group of people who help each other. The sessions bring them happiness and get them active, so the programme is brilliant and it was really special for me to see that and be a part of it.

“Being involved means I’m helping people, making new contacts and learning new skills, so I can only see myself doing more of this stuff moving forward to benefit others and myself.”

Despite maintaining the ambition to become a professional footballer, Steel’s forward-planning and triple distinction grade profile on the Extended Diploma has allowed him to put plans in place to study a two-year fast-track University degree, starting in September.

“Mark Roberts pointed me in the direction of The PFA because they offer financial bursaries to help you move into University and other qualifications,” Steel added. “They also put me in contact with Staffordshire University and we worked out what would be the right course for me.

“I selected the Sports Writing and Broadcasting option and then the application process was quite straightforward. I’m hoping to do a blended learning course, so I can study alongside football if I’m able to get a professional contract, either at Cambridge or somewhere else.

“I wanted to make sure I had plans in place for my future transition at an early stage, to make things easier for myself and also to ensure I am moving forward with something that I really want to do.

“Having that planned early has eased my mind. I’ve taken ownership of my situation and put myself out there and now I’m seeing doors start to open, so I’m looking forward to seeing how I can progress.”