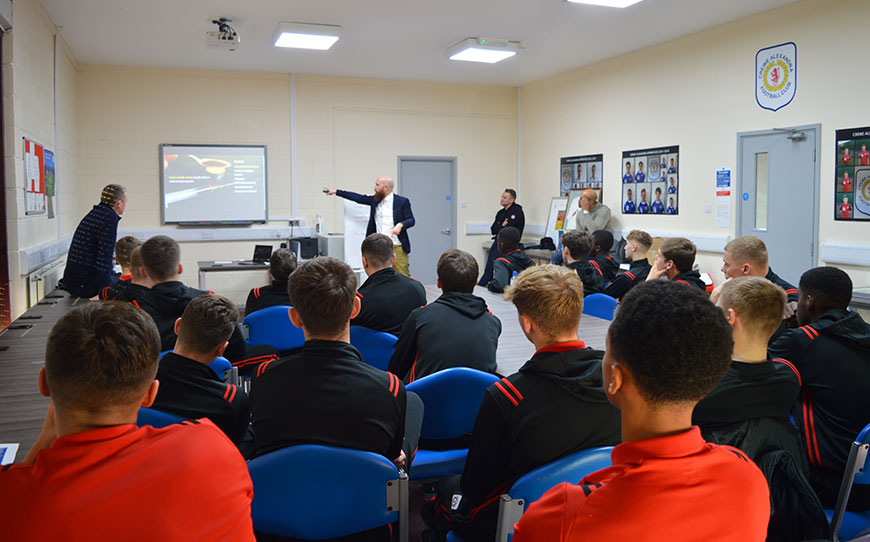 Crewe Alexandra apprentices learned about the pitfalls of professional football and how to avoid destructive behaviour patterns during an LFE Life Skills seminar from the Sporting Chance Clinic.

Delivered by Head of Education Alex Mills and ex-footballers Eddie Johnson and Lee Thorpe, the teenagers gained valuable information on how emotional well-being links to addictive behaviours like gambling, alcohol use, drug use, gaming, social media and sex.

“We cover lots of different issues within the session and we also provide lived experiences with former footballers discussing their particular issues,” Mills told LFE. “The lads are really able to relate to someone talking about their own experiences, and also delving into not just what they did, but why they did it.

“The apprentices might not drink or play on a games console, but they may relate to certain emotions that caused Lee to become a recreational drug user. That’s why it’s important for them to identify with the emotions behind problematic behaviour.

“Some people are more resilient and can handle different emotions and move on quite quickly. Others can suffer a severe impact from certain life events or certain emotions and that’s something that we want to address before it then leads to problematic behaviours. Sporting Chance is there as a completely independent source of support.”

The workshop is split into phases, starting with detail on different emotions and how they can lead to various issues, while the youngsters then discuss and compare their understanding of the range of topics before ending with personal tales from the ex-professionals.

Mills continued: “The first part of the session attempts to make them feel comfortable with talking about emotions and admitting that they have them and that they’re perfectly normal. We’re trying to remove that stigma that exists. Once we address that, then we look at engaging them with ways to identify those emotions and ways to deal with them.

Addiction is the end of the line. We want to get lads talking about these things before it develops into that sort of a significant problem.

“Cultural change is the holy grail and if groups of players are able to support each other and set certain standards about how they talk with and about each other, that’ll definitely produce a more aware and open generation.

“Ultimately, the biggest thing they can take away with them is the Sporting Chance phone number (07500 000 777), because that number saves people’s lives and may save their life or a team-mate’s life one day. That’s why we’re here, to help them address emotional health issues that can cause them problems.

“There’s no emotion too small for them to pick up the phone and call. You’re the best judge of whether something is bothering you or not and that’s the only thing that you have to bring to the table. A professionally trained person will work with you to achieve solutions.”

Former Manchester United Academy player Johnson suffered with his own difficulties as a player, which came to a head when his career was cut short at the age of 27 due to injury. Having received support from Sporting Chance, he is now keen to pass on his experiences to the next generation.

He said: “It’s important for the lads to know that they’re not alone in the way they are feeling. There are thousands of players who use our service, so they just need to know how and where they can get help should they ever need it.

“There’s a 24-hour helpline that the lads can access at any time, whether they’ve just woken up in the middle of the night and don’t feel quite right, or whether they’re in a more serious situation and require counselling, which is another service that is provided – funded by The PFA.

It’s okay to be vulnerable and open up and talk. I bottled things up and it caused me a lot of problems. The fact that I didn’t use the services available to me led to losing relationships, losing money and making stupid choices.

“Once I did speak to Sporting Chance and built some foundations of acceptance that I wasn’t a professional footballer anymore, I thought it would be beneficial for me to then pass on my experience. If we can spark thoughts in their heads and give them more awareness of these topics, then I genuinely believe we can change people’s lives.”

“I found it very informative because it’s a side to football that not many people take into consideration,” said the 17-year-old. “It’s good that we get taught about it because if anyone does need their help, they know where to go.

“Discussing these topics with my team-mates allowed us to get an insight into each other’s perspective of how things stand. If as a team collectively we know what’s right and wrong, then it makes it easier to advise each other and identify where someone’s going wrong.

“We talked about what we individually feel can be considered as a problem and what’s normal, so we can set that standard between each other and we acknowledge that we can interact with each other if something does get out of control.

“Someone’s issues can be hidden, so you’ve just got to take a step back and look at the bigger picture and just ask someone if they’re okay from time to time because sometimes all it takes is just starting up a conversation.”