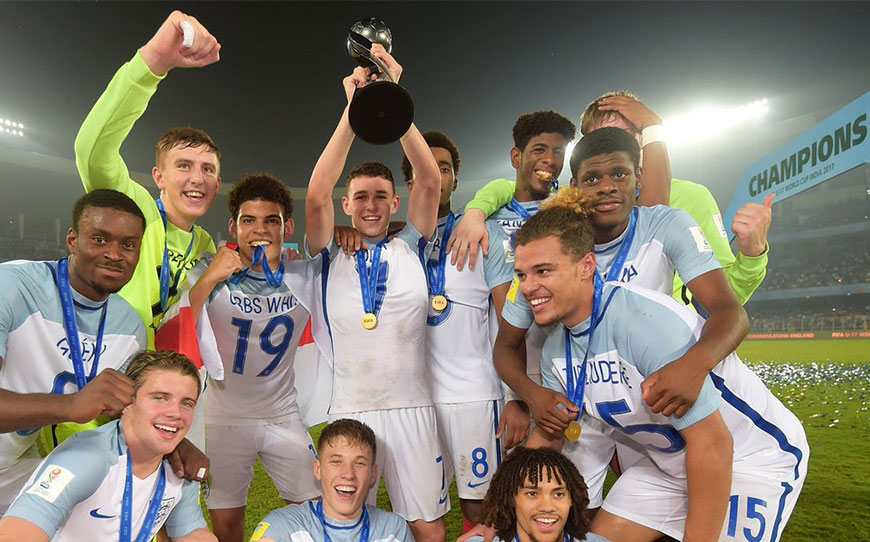 Four current apprentices became world champions over the weekend as England lifted the Under-17 World Cup for the first time in the country’s history with a 5-2 win against Spain in India.

Steven Sessegnon (Fulham), Morgan Gibbs-White (Wolves), Danny Loader (Reading) and Billy Crellin (Fleetwood Town) were all members of the victorious squad, who overturned an early two-goal deficit to see off the Spaniards.

Full-back Sessegnon and midfielder Gibbs-White were both given starting berths and the latter almost gave England a perfect start with a low strike that was well saved inside the first five minutes.

However, despite dominating the game in terms of possession, they found themselves 2-0 down with half an hour on the clock after Sergio Gomez struck twice as Steve Cooper’s side’s chances appeared to be slipping away.

With half-time approaching, it was Sessegnon who produced a moment of quality to get England back in the game with a superb cross from the right, setting up Golden Boot winner Rhian Brewster to halve the deficit.

After the break, the Fulham teenager was the creator again as he rampaged forward on an overlapping run and played a square pass across goal to Gibbs-White, who calmly tapped home to restore parity on the hour mark.

And the Young Lions were ruthless in finishing off the job once Phil Foden had put them in front, with Marc Guehi doubling the advantage before Foden, who was awarded the Golden Ball as the tournament’s best player, completed the scoring in the 88th minute.

Gibbs-White was particularly influential throughout the tournament, appearing off the bench in all three group games and the round of 16 clash with Japan before earning a starting role for the remaining three matches, netting in the quarter-finals against USA and in Saturday’s final.

Sessegnon, who was recently named in LFE’s October 2017 edition of ‘The 11’, also became more involved as the team progressed through the competition, making five consecutive starts and contributing five assists following his first appearance in the final group fixture against Iraq.

Elsewhere, striker Loader appeared twice during the group stages, scoring twice against Iraq, while keeper Crellin was England’s second choice in between the sticks, but was handed his Under-17 debut against Iraq and celebrated by claiming a clean sheet in the 4-0 victory.

Here is a list of all apprentices past and present to claim silverware for England’s youth teams this year: